Last year’s AFC Championship between the Kansas City Chiefs and New England Patriots was one of the best playoff games in recent memory. After a back and forth game, the Patriots managed to take the lead with just 39 seconds left, only for Patrick Mahomes to lead the Chiefs on a four-play, 31-second drive to tie the game and force overtime.

The problem is, that four-play drive was the last time Mahomes would touch the ball. After receiving the overtime kickoff, Tom Brady marched the Patriots down the field on a methodical 13-play drive, and the game was sealed when Rex Burkhead scored from two yards out. Despite how incredible the game was overall, it still managed to leave a sour taste in the mouths of a lot of fans and spark debate around the current set of rules for NFL overtime.

The debate resurfaced this week after a pair of games went to overtime during Wild Card weekend. Adding fuel to the fire, the XFL also released some of its major rule differences ahead of its inaugural season starting next month. Chief among them is a new shootout-style set of rules for overtime that bear more of a resemblance to something you would see in hockey or soccer.

According to the newly released XFL rule book, “Overtime shall consist of 5 ‘rounds,’ staged in alternating single-play possessions as is customary in NHL shootouts or MLS penalty kicks. A ‘round’ will consist of one offensive play per team. Each possession starts at the opponent’s 5-yard line and the offensive team has one play to score. The team with more points after 5 rounds is the winner. If teams are tied after 5 rounds, then rounds continue until one team is leading at the conclusion of a round, and that team will be the winner.”

It is easy to see why people are excited about it. The thought of getting to see Mahomes and Brady duel in a soccer-style shootout should be enough to get any NFL fan excited. And beyond that, it would help to reduce the time of the game (something the NFL tried to accomplish by shortening the OT period to 10 minutes in 2017) and get rid of the possibility of a tie, which is universally hated. All of which is objectively good for the game. But maybe the biggest question is: does it actually allow the better team to win more often?

What would the new rules look like in the NFL?

Deciding on what makes one team better than another can be a bit subjective, so for the sake of simplicity, we will use publicly available Vegas lines from SpreadSpoke as a measure of team quality.

Since Sports Info Solutions first started charting games in 2015, 56 games with a Vegas favorite have gone to overtime. In those games, the favorite has come out on top 32 times, equal to about 57%. Even after the NFL implemented some rule changes prior to the 2017 season, there has been virtually no change. In that time Vegas favorites have won 16 of 28 matchups, which again is equal to 57%. In both instances, this is lower than the 64% win rate for Vegas favorites in all matchups, but still seems to indicate the current rules allow the favorite to win more often than not.

To compare this to what the XFL rules may look like if implemented, we ran 10,000 simulations of each of the 56 overtime matchups since 2015 based on the new XFL rules and a team’s conversion rate on plays similar to the “penalty kick” they would be taking. For the sake of sample size, teams’ conversion rates for each season were calculated using their success rates and third or fouth down with between four and six yards to go.

Overall, the betting favorite only won 50.6% of simulated games, barely better than a coin flip, and seven percentage points lower than what we’ve seen under the current NFL rules. While the discrepancy in sample size is very relevant here, looking at it another way, the favored team only won more than 57% of its matchups in about 17% of the simulations. 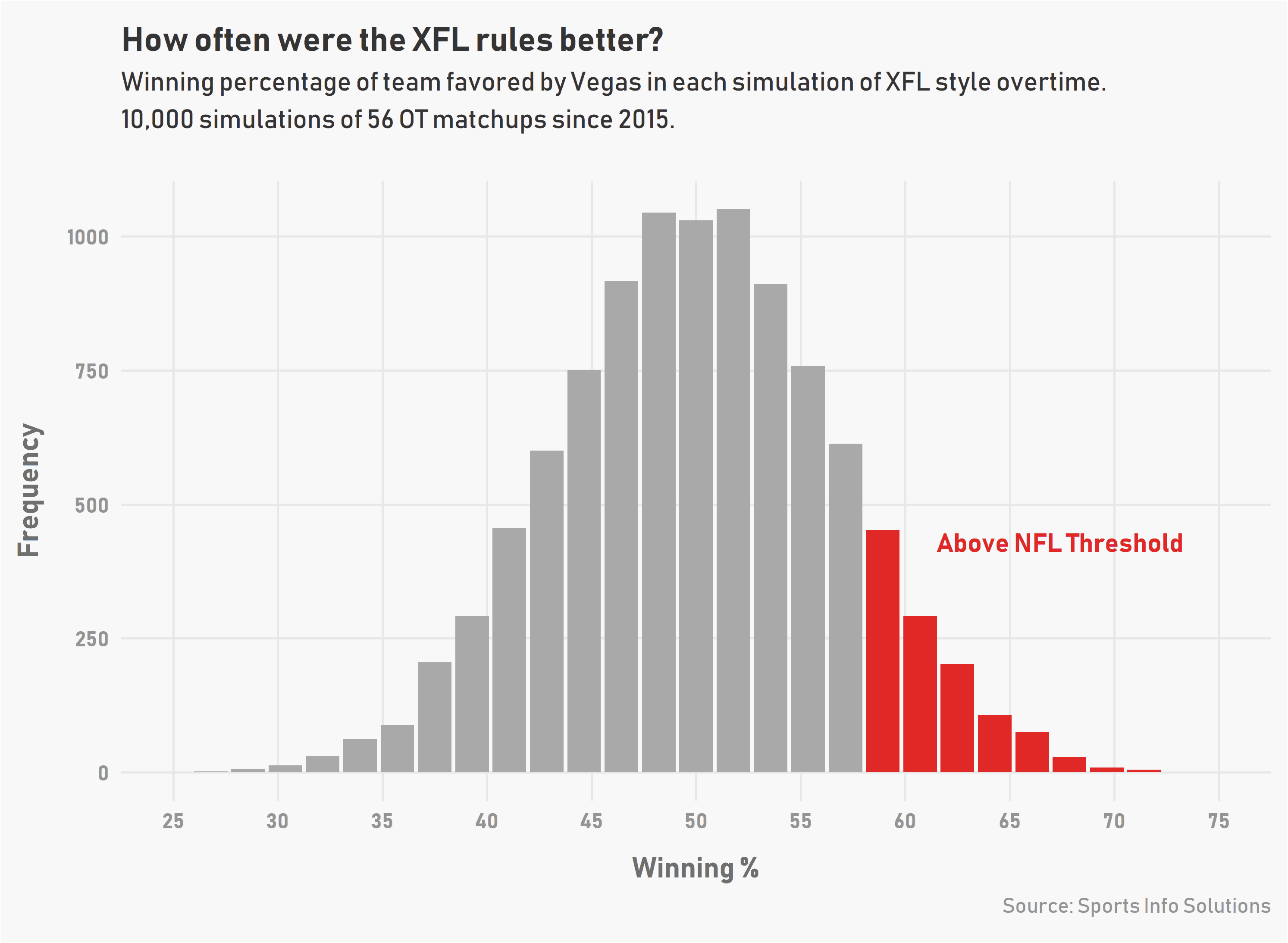 The reasons for this are fairly intuitive. While each team does get a chance to have the ball under the new XFL rules, conversion rates from five yards out are not a good proxy of team quality and are subject to a lot of variance.

Additionally, there is some evidence in the NFL, albeit in a small sample, that teams favored more heavily in a given matchup are more likely to win than teams that are only favored slightly. And that would likely not be the case under XFL rules. 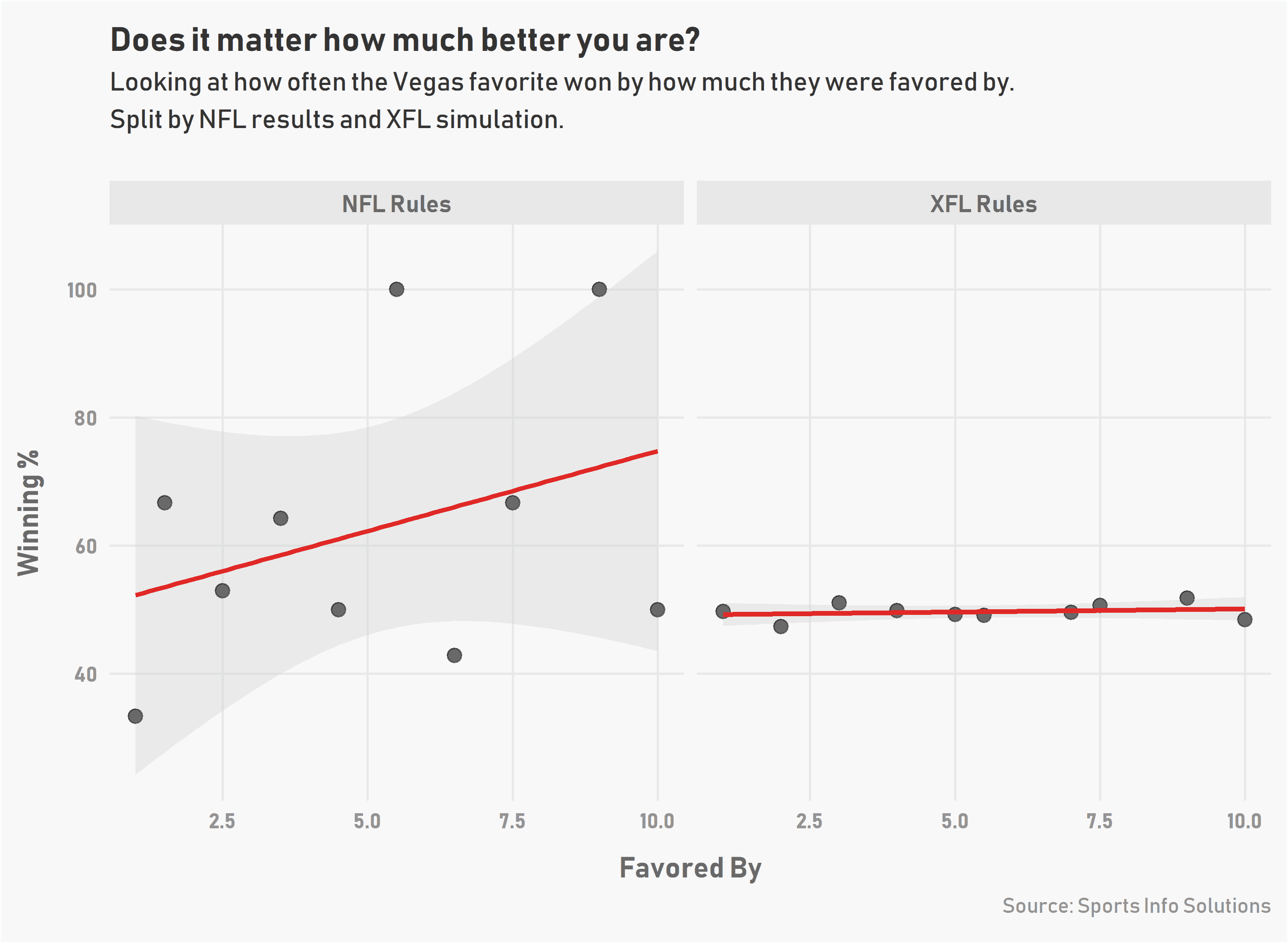 Regardless of how much a team was favored by pre-game, the odds of them winning stayed right around the 50% mark in the XFL simulation. Again, given the nature of the rules, this isn’t entirely surprising. A team’s ability in situations with 5 yards to go is no more an indictment of team strength than a hockey team’s ability on penalty shots or a soccer team’s ability on penalty kicks. As any hockey or soccer fan would likely attest, shootouts don’t really favor the better side or really anybody for that matter.

The current NFL rules are undoubtedly far from perfect, but they may not be as broken as we think, or at the very least the answer to fixing them may be more complicated than one might expect.

The XFL rules would help with some of the problems the NFL is currently facing. Games that go to overtime would be shorter on average, result in less wear and tear on players, and it would get rid of the dreaded tie. But if part of the goal is also making sure the better team wins, it is unlikely to accomplish that.

We can’t draw conclusions about how teams might adapt if rules similar to these were to be adopted. Like 2-point conversions, teams would likely practice plays from 5 yards out more and have plays set aside in the event of overtime, and maybe this would favor teams with better coaching slightly. Based on the information we have now though, there’s nothing to suggest that these rules would do anything other than introduce even more variance into overtime results.

NFL fans tend to point to the coin toss as a reason that the current NFL rules for overtime are unfair, but statistically speaking, a coin flip is exactly what you’re getting in the XFL.