Does The NFL Have A Penalty Problem?

A lot has been made this season about a supposed penalty problem in the NFL. Through the first seven weeks, penalties are up, players are speaking out and being fined, games have swung, and fans are frustrated. But is there really a problem? Or is this criticism simply a result of increased scrutiny from an endless amount of slo-mo replays and a cacophony from millions of arm-chair referees on social media?

Multiple factors come into play here. To see what they are, let’s first look at the types of penalties that are being called more often.

Here we see that some of the reasons for increased penalties are the emphasis on player safety and new offensive tendencies. The increase in rules concerning player safety can be seen in the rise of penalties such as Roughing the Passer, Leading with the Helmet, and Illegal Blocks.

One of the more interesting results of looking at which penalties have increased the most is seeing how new offensive trends are being officiated. Ineligible Receiver Downfield penalties are on the rise due to the new RPO trend that has escalated over the past few seasons. RPO’s increase linemen downfield since they require run blocking even when the QB decides to throw the ball. Also, Illegal Shifts are up due to the offenses using more pre-snap motion than ever before.

Another point of emphasis for referees that the numbers shed light on is the increase in holding calls. 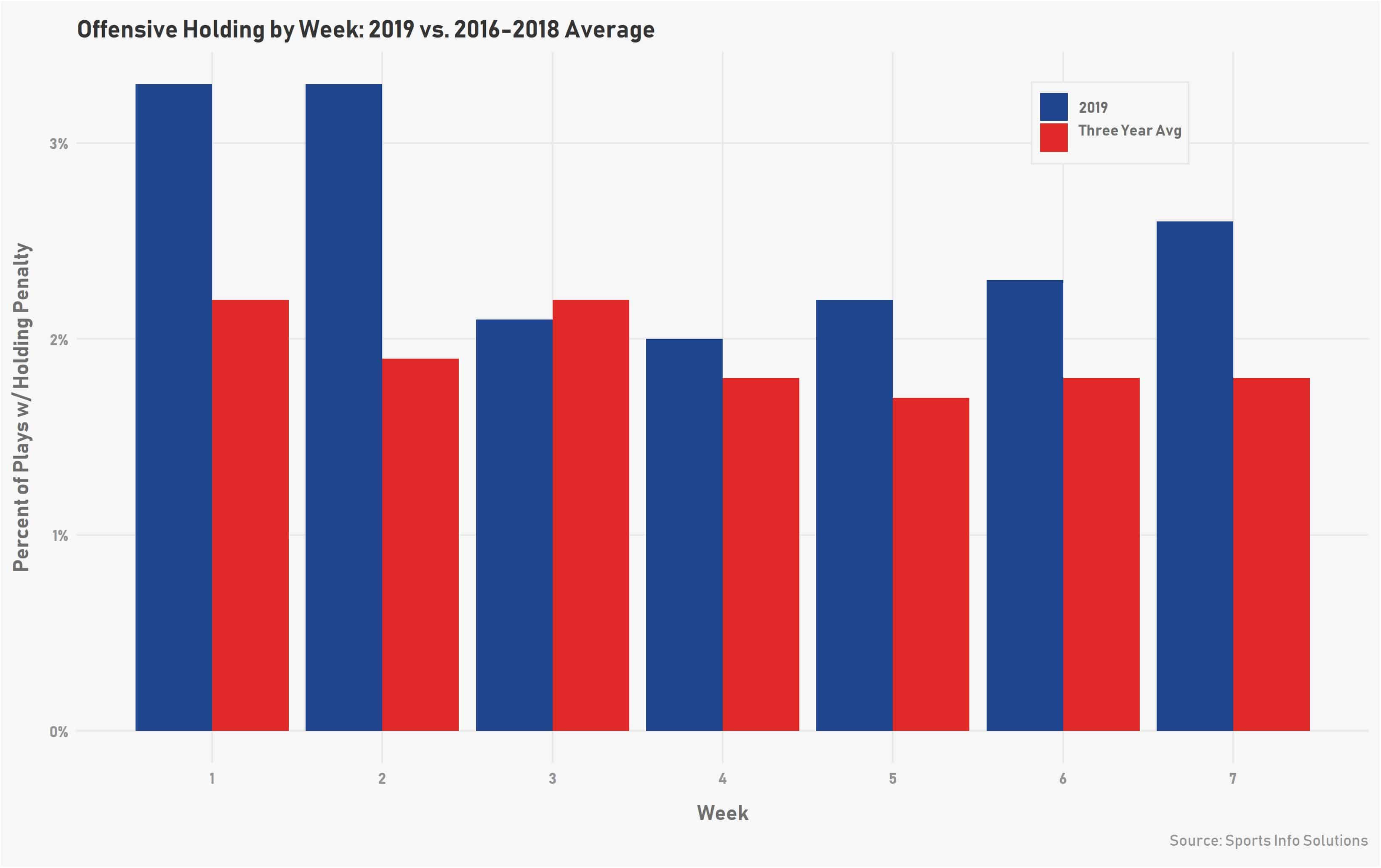 Holding was emphasized early on this season, but receded back closer to normal levels during Weeks 3 and 4. But, over the last three weeks we have seen another increase that is slowly getting back to Week 1 and 2 levels. It seems that the heavy criticism the NFL faced for emphasizing holding slowed the trend, but is wearing off. It will be interesting to watch how holding is called throughout the rest of the season.

Much of the current frustration surrounding penalties stems from a perceived increase in inconsistency between how they are being called. And there is actually a case for this being a real trend. Compared to the last three seasons, the standard deviation between how often different referee crews call penalties in certain situations has increased. The standard deviation here measures how spread out a referee crew’s tendency to call penalties are from average. 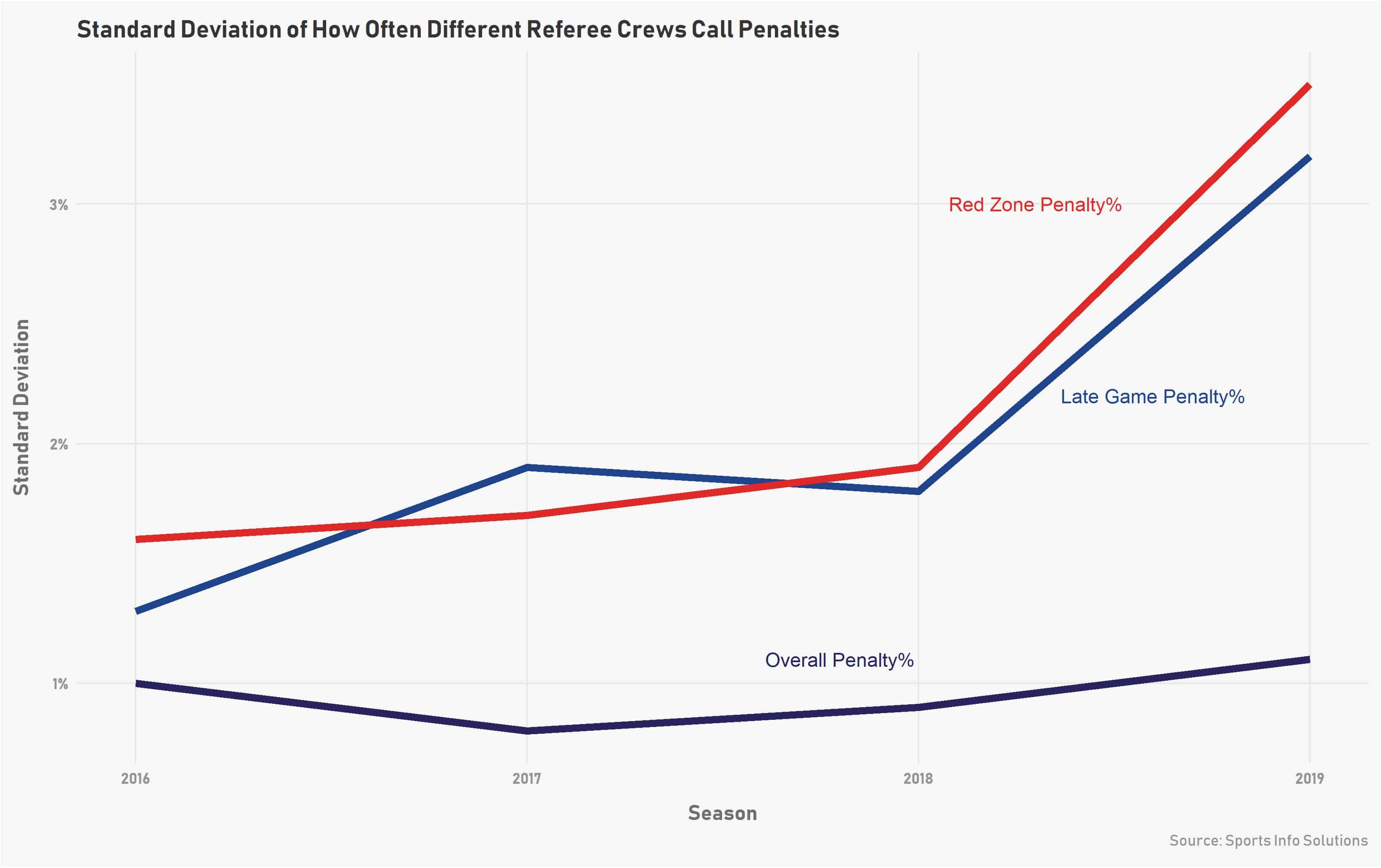 Overall, referee crews have only seen a small increase in inconsistency, but high-leverage situations, such as the red zone and late in the game, have seen a larger increase. This means that there is a larger range to how individual crews officiate these situations than before.

You might hypothesize that crews led by less experienced referees would be calling more penalties than their counterparts, the theory being that more experienced referees would call fewer penalties since they were trained in an era before the increased safety emphasis. But, the opposite is actually true when we compare the set of three new referees this season (Adrian Hill, Scott Novak, and Brad Rogers) to the three referees with 20 plus years of experience (Walt Anderson, Carl Cheffers, and Tony Corrente).

The three crews led by new referees are extremely similar to other referee crews in how often they call penalties. Crews led by referees with 20 plus years of experience are actually the ones creating the inconsistency between crews, as they are calling penalties more often than their peers. This holds true for both the offensive and defensive sides of the ball.

NFL referees have an extremely difficult job, as they are tasked with making critical split-second decisions while watching the game at full speed and most of the time at imperfect angles. They are then evaluated and criticized by fans who have the luxury of watching endless replays from multiple angles. It’s a tough ask for crews to get every call correct on the field. But, we should at least expect consistency week-to-week and game-to-game. And this is where the NFL has some work to do over the remainder of the schedule.