Is There A Good Way To Slow Down Derrick Henry And The Titans Offense?

Over the first two rounds of the playoffs, Derrick Henry has racked up 377 yards on 64 carries, with 268 of those yards coming after contact. He has also averaged 0.11 EPA per carry and has a Positive% (the percent of plays with an EPA above zero) of 52% per Sports Info Solutions. It has been one of the most dominant playoff performances by a running back in recent memory, and he has done it against two of this season’s top defenses.

There is more to parse from Henry’s performances than his gaudy stat lines, though. In the Wild Card round, the New England Patriots seemed willing to let Henry try to beat them. They only stacked the box (at least 8 men in the box) on 23% of the Titans’ offensive plays, one of the lower percentages Tennessee saw over the course of the season. And even though Henry ran wild, the Titans’ offensive performance as a whole was pretty tame. Removing the last second pick-six from Logan Ryan, the Titans put up only 14 points on 272 total yards of offense, neither of which would be good enough to win in the NFL most weeks.

By contrast, last weekend, the Baltimore Ravens stacked the box on 64% of the Titans’ offensive snaps (including 59% of plays in the first three quarters before the score became completely lopsided), by far the highest mark the Titans faced all season. Despite this, Henry still ran for almost 200 yards and the Titans offense as a whole put up 28 points before the end of the third quarter en route to a comfortable win.

Facing stacked boxes is not something new for the Titans offense. On the season, 138 of Henry’s league-leading 303 carries came against a stacked box. Generally speaking, consistently sending your back into a stacked box is an easy way to stifle an offense, but on those runs Henry still averaged 4.8 yards per attempt (Y/A) and 2.9 yards after contact per attempt (YAC/A), both of which were only moderate decreases from his performance overall, and would have ranked towards the top of the league overall.

Henry also managed to post a positive EPA overall on runs against stacked boxes, something that is notoriously difficult for running backs to pull off in any capacity. Only 11 other backs in 2019 posted positive EPA totals on all runs, regardless of how many men were in the box.

But slowing down Henry (or at least trying) is only part of the problem when trying to defend the Titans offense. While the Titans ranked as only the 15th best offense in the regular season against non-stacked boxes, averaging a little below zero EPA per play, that number jumped to 0.07 when facing stacked boxes, the second-best mark in the league. Most of this value stems from the passing game. When passing against a stacked box, Tennessee averaged 0.44 EPA/P in the regular season and had a Positive% of 63%, both of which were top in the league. 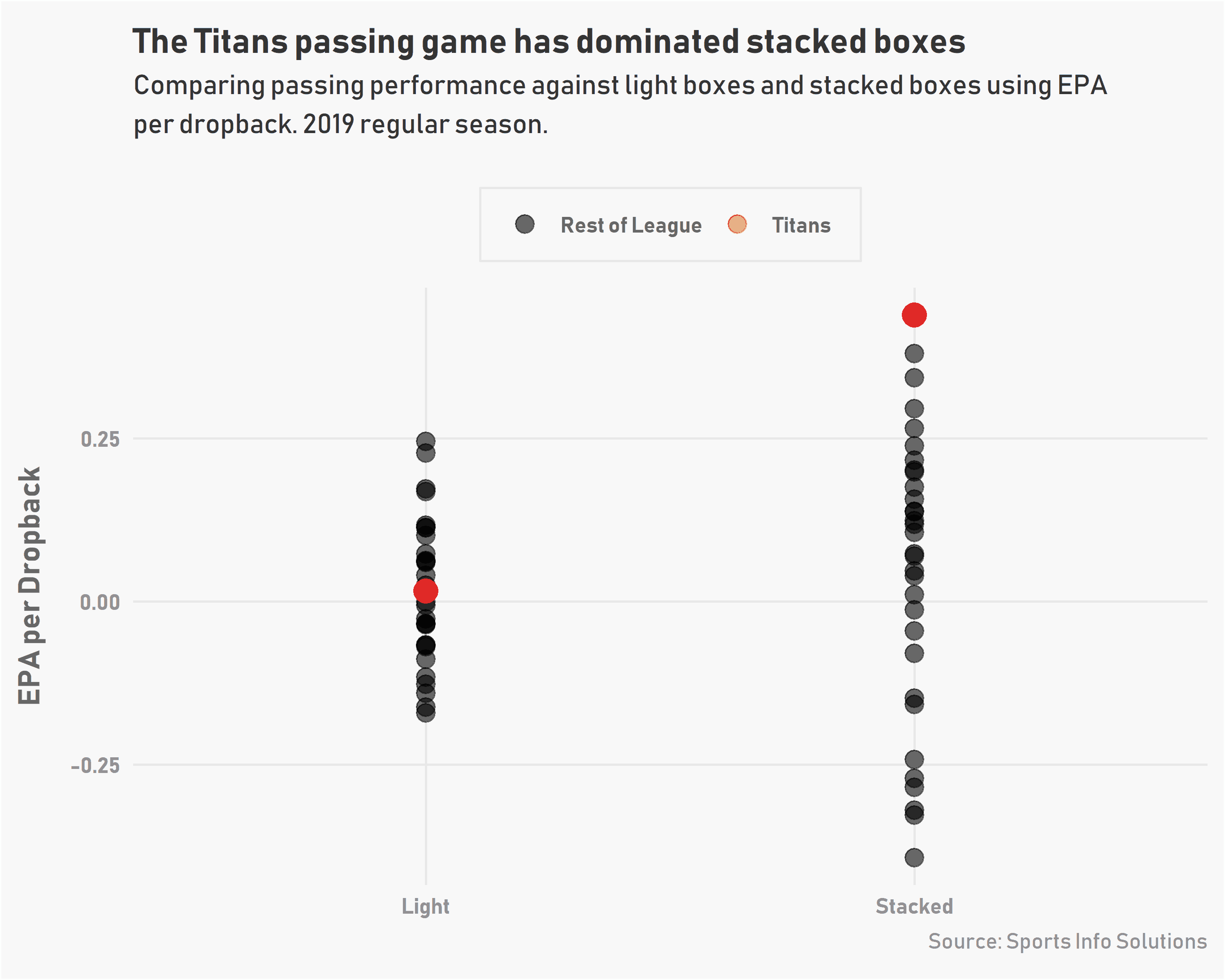 The Titans were also particularly good at generating big plays against a stacked box. Against a stacked box the Titans had a Boom% (plays with an EPA greater than 1) of around 14%. On pass plays only, that rate jumped to 33%, which again was the best in the league.

Looking ahead to the AFC Championship game this weekend, it will be interesting to see how the Kansas City Chiefs opt to defend the Titans. In their Week 10 matchup, the Chiefs stacked the box on only about a quarter of the Titans’ offensive snaps, but were still burned by multiple big plays. The Titans averaged 6.8 yards and minus-0.04 EPA/P against non-stacked boxes on 37 offensive plays. On only 12 plays against stacked boxes the Titans averaged 0.57 EPA/P and gained 12.8 yards per play. This is obviously a small sample and should not act as evidence to never stack the box against the Titans, but rather is illustrative of the larger point — the Titans have been very successful at countering teams who load up to stop the run.

Of course, stopping the Titans offense isn’t as black and white as stacking the box or not. Football is never that simple. The Patriots found success against the Titans at least in part because they have one of the top corners in football, the best defensive mind in all of football and one of the best defenses in football, full-stop. But they did also bring a sound defensive game plan. A big part of what has made the Titans offense so successful this season has been punishing teams for overcommitting to stop Henry, and last week’s matchup against the Ravens should act as a cautionary tale for the Chiefs.