The Unbelievable Story of the 2017 Colts

I have a pretty unbelievable story to share regarding the 2017 Colts. This team has largely been forgotten, because they didn’t have Andrew Luck & the coaching staff was fired after the season. This is a story about the consequences of horrendous decision making.

This is what happens when a team doesn’t pay attention to detail. This is what happens when they don’t even know the details because they haven’t studied them. They haven’t studied them because they haven’t bothered to crunch the data and realize there are details to be found. That’s analytics. The use of math or statistics to gain valuable knowledge from data. Knowledge which can be used to recommend action or guide decision making. Literally, the Colts didn’t know what they didn’t know. But if they bothered to break it down, here is what they would have learned. And perhaps they would have learned it in time to do something about it. To win more games. To save jobs. To change their season:

(NOTE: I shared this story on Twitter. Presenting the data in a step-wise manner (like tweets in a thread) seemed easier to digest rather than compacting in paragraph form, so I maintained that format with bullet points below)

Clearly the 2017 Colts were not a great team. But terrible teams are unable to consistently build leads into halftime and into the 4th quarter, like the Colts were routinely able to do. “Something” happened in the 4th quarter to cause such disastrous results. Let’s dive deeply into the analytics of their play calling and decision making to understand WHAT they did, WHY they did it, and HOW it affected the team. Note that I had planned to save this for my 2018 Football Preview book, which I’m writing and will publish in late-June. But this was so incredibly breathtaking, I thought it needed to stand on its own:

ON BOTH EARLY DOWNS

The Colts were completely predictable in a number of ways in the 4th quarter. They worked against themselves. They refused to pass out of their most successful personnel groupings for passing. Their predictability in rushing led to inefficiency, which caused hard-earned leads through 3 quarters to slip away in the fourth.

When their leads slipped away, why didn’t Colts come back any time they were trailing by close margins in the 4th quarter?

Here is a look at the overall play calling from the Colts in 2017, courtesy of Sharp Football Stats: 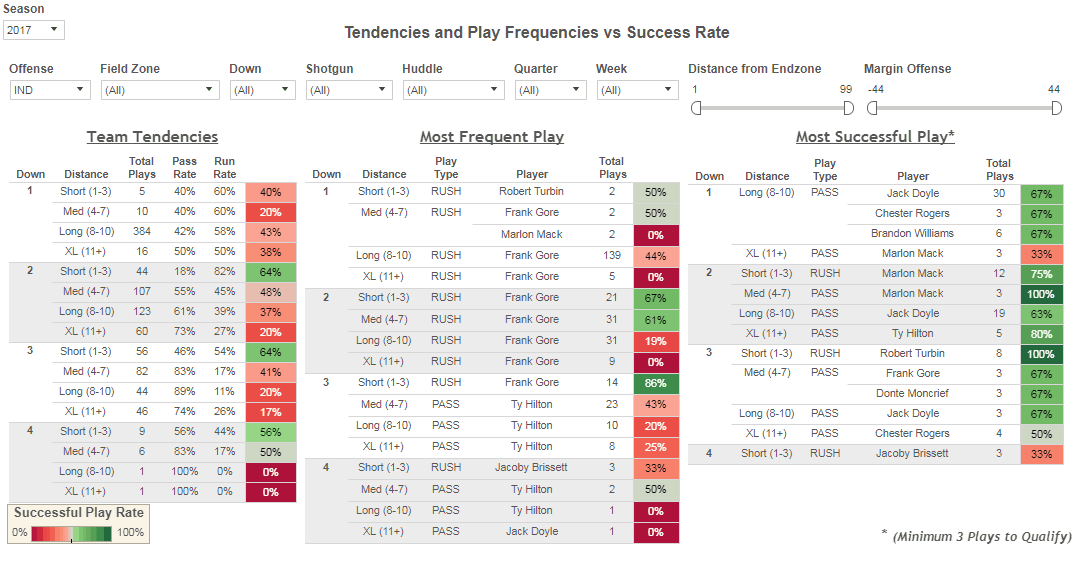 Over the course of the entire game, it’s evident the Colts were far too predictable, and featured substantial amounts (see middle column) of

Using this visual data, the amount of “red” in the middle column (representing unsuccessful plays) jumps out at you. Meanwhile, the amount of green for those same down & distance situations in the far right column represents the Colts most successful plays. Clearly they had lots of other possibilities apart from riding Frank Gore so frequently on early downs that weren’t explored enough.

The sad part is, the Colts probably didn’t even realize or measure the impact of their 4th quarter play calling. It was far worse than they could have imagined. My guess is they had no idea that they NEVER passed while maintaining a 4th qtr lead without 3 WRs on the field.

They likewise probably had no idea that the only teams to enter the 4Q with a lead more often than themselves (through week 12) faced each other in this year’s Super Bowl: the Eagles & Patriots.

It’s unfortunate to sit back now and realize that many of these 4th quarter leads which became losses were avoidable with stronger attention to detail and a better focus on analytics.

Often time fans and media are quick to place blame on players making a mistake on the field, without realizing the play call wasn’t optimal to begin with, and majority blame should shift elsewhere. Understanding responsibility for the error is essential to correcting it and ensuring it doesn’t become repetitive. Because repetition leads to habit-forming behavior. And unfortunately, that is exactly what happened to the Colts play calling.

When placed into certain situations (leading in the 4th quarter) the Colts changed their strategy and style of play which earned them the lead through the first three quarters. They played tighter. They played predictably. They played not to lose. They refused to use their optimal play calls. They forced their quarterback (experienced as he was) into predictable passing situations and allowed the defense to attack, knowing what to expect.

Reviewing this in hindsight is certainly infuriating. I will be doing similar dives into the 31 other teams for my 2018 Football Preview book, out in late-June. I’m guessing none will be quite as eye-opening as what the 2017 Colts did to themselves in the fourth quarter and the monumental impact it had on their final record, but we shall see.

For the 2017 Colts, this is what happens when a team does not pay attention to detail. Details they would only know if they incorporated more analytics. Analytics isn’t a dirty buzz word. Teams have been winning Super Bowls for decades using analytics, such as Bill Walsh’s 49ers. Analytics is simply the use of math or statistics to gain valuable knowledge from data. If you add up the rushing yards of the Colts from 1-2 WR sets when leading in the 4th quarter, and divide by rushing attempts, and realize that these runs are totally inefficient, you’re essentially using analytics. Sounds far less scary and more basic, and teams to accept this level of detail with open arms and incorporate it into their arsenal of weaponry as they try to improve and put the best product on the field which gives them the best chance to succeed.

Once more teams start self-scouting in this manner, they will avoid more pitfalls like the 2017 Colts faced. The impact it had on their season and final record was profound. Additionally, this level of analysis is also able to find holes in opponents on a weekly basis. Such as why I believed the Patriots would have success throwing on the #1 pass defense of the Jaguars in the AFC Championship, or why I believed the Eagles would have immense success running on the Patriots in the Super Bowl.

With the Eagles winning the Super Bowl this year, seeing a ton of success thanks to incorporating far more analytics into their team than most, I believe we’re turning the corner. Teams that do not use more analytics to self-scout and identify their own strengths and weaknesses they weren’t otherwise aware of, or to scout their opposition, will soon fall behind. Way behind. “Analytics” are not a robot overlord, send out of the matrix to tell a coach what to do, expecting subservience. Intelligently incorporating analytics will not paralyze a team nore make them too smart for their own good.

Working with experts who can share analytical insights tactfully, while allowing the coaching staff to take what they want from the information as part of their own final decision making process, will no longer be the path less traveled in the NFL. It is now, will be in the future, and truthfully, has been for some decades, the easiest way to win in the NFL.