When the NFL Gives Away Draft Picks, You Better Take Them

When the NFL introduced the salary cap in 1994, they also introduced compensatory picks. There are 32 free picks distributed to qualifying NFL teams. What qualifies a team to receive a free draft pick?

A total of 32 compensatory picks are awarded to teams based on the players they lost or gained during free agency in the year prior. This allows clubs that have lost free agents to another team to use the draft to attempt to fill the void. The value of compensatory FAs gained or lost by each team is calculated by the “proprietary formula” and a club is awarded picks of equal value to its net loss of such FAs, up to four. The picks come at the end of Rounds 3 through 7.

Why does this matter? Wouldn’t it be better to not lose free agents and let other teams get these mid to lower-level (outside the top-96) draft picks which are more of a crapshoot?

Many teams don’t have a proper gauge to measure future performance vs present worth. Players are often awarded contracts based on prior performance, but many teams ignore an important ingredient which is the roster implications of awarding a nice contract to a player who outplayed his prior contract.

A goal of building a complete roster is accumulating a collection of players who synergistically are capable of outperforming what they are being paid. When that combines with great coaching, Super Bowl teams are built.

When a player reaches free agency, it is typically for a reason. The team decided not to extend that player’s deal before it reached its conclusion. Sometimes that isn’t a red flag, but often times, it should be. Even for average players, a bidding war ensues during free agency. The fact that the NFL continues to increase the salary cap only encourages such dueling between front offices.

This further increases the player’s cap hit to the “lucky” team that signs him. And that makes it more unlikely that the player will be capable of outperforming what he is being paid.

As such, this is why so many player signed to multi-year deals in free agency are cut before those deals reach years 3 or 4, and why so many of these players fail to live up to expectations. The expectation that the player, on a new team with different players and coaches, can even live up to the performance he was able to deliver at his peak on a prior team that maximized his ability to deliver (and hence record great statistics which make him a desirable free agent) is low. Expecting this player to meet, let alone surpass that performance to the point that he’s outperforming his new contract is a risky proposition.

Building through the draft is far more effective. But it is difficult. Each year, teams are given only 7 draft picks by the NFL, and it is very difficult to consistently excel at evaluating and projecting college athletes. I’m not 100% on the train that drafting all players is completely random. I believe that certain talent evaluators are better at understanding certain position groups. But by and large, it is difficult to consistently hit draft picks.

In a somewhat random game, teams that acquire more draft picks are more likely to walk away with better players.

And this is the point.

The “kill two birds with one stone” mechanism to exploit both keys?

Let expensive players that aren’t critical to your team walk, let other teams overpay them and don’t sign expensive day 1 or day 2 free agents from other teams. Those principles make sense even if the NFL wasn’t rewarding you for being intelligent.

But you get another bonus.

You also get free picks in the form of comp picks. The NFL awards 32 of them each year.

Let’s examining the teams that have most benefited from comp picks the last 5 years: 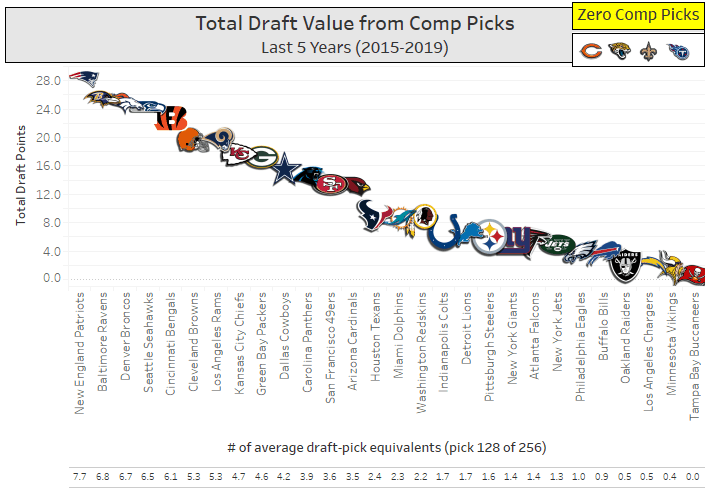 It’s no surprise that two of the smartest teams over the last decade at understanding how to build winning rosters (Bill Belichick and Ozzie Newsome) are at the top of this list. It’s also no surprise that when you look back at the last 5 teams that have won a Super Bowl (New England, Philadelphia, Denver, Seattle and Baltimore) that 4 of the 5 teams dominated the comp pick process.

The lone team that did not (Philadelphia) didn’t receive comp picks from 2015-2018. (Note that Howie Roseman didn’t reassume control from Chip Kelly until 2016, and needed to take some time to settle the roster.) By letting 2018 free agents walk, they received 2 comp picks in the 2019 draft and by letting 2019 free agents walk, they are set up to receive the #1 most draft value from the 2020 comp picks. Now that the roster is more settled, Roseman clearly appears to be focused on exploiting this rule when possible.

Note that the above chart is based on draft points, a concept created by Football Perspective to more accurately value the “worth” of a draft pick based on how high that pick is. Picks near the top of the draft have a stronger hit rate, and thus there is not a linear distribution of hit rate through the draft.

Here is a look at the total comp picks earned over the last 5 years, by round: 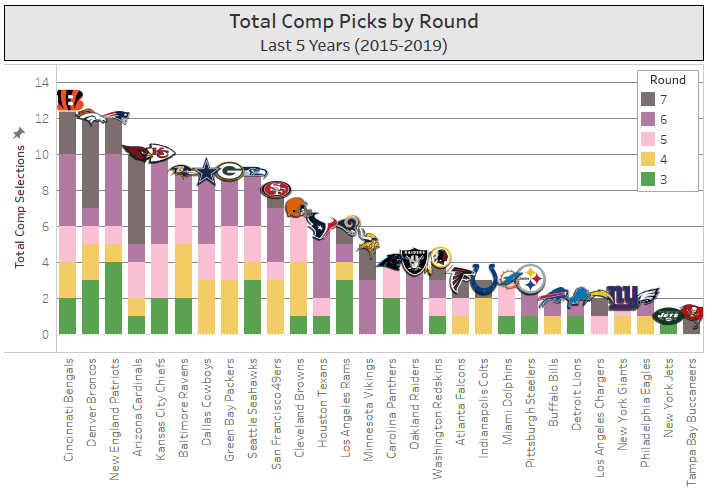 There are many ways to build a strong roster. With cap increases, some teams are allowing themselves to dabble more in free agency than they did in the past (such as the Packers in 2019) and this strategy isn’t inherently wrong. Some years, adding certain free agents will make sense. But history has shown us that devoting too much of your roster construction on building through free agency is inefficient. With comp picks now capable of being traded (new rule in 2017), some of the smartest teams are taking advantage of this rule.