Today the NFL announced the entire 7-round draft order.  Many years, until all the final draft-day trades are executed, it’s impossible to know for certain which team ended up with the most total value in the 2018 NFL draft. Not this draft.  Not thanks to Sashi Brown.  Barring a ridiculous series of trades, the Cleveland Browns should absolutely own the 2018 NFL draft based on total draft commodity entering the draft.

While the prior year’s finish dictates current year selections, a number of elements cause the distribution to be imbalanced on an annual basis.  For instance, prior year trades (and current year trades) will cause some teams to be better off.  Additionally, the overlooked (by most fans) world of compensatory selections allows some really good teams to have even more value than one would expect based on their prior year’s finish. The foundation of draft commodity dates back Jimmy Johnson draft values, but the concept of “draft points” is based on Chase Stuart’s model from 2012 which assigned point value to each draft pick using a more analytical approach.

As was Sashi Brown’s plan from day one, the Cleveland Browns not only are set to own the draft, they literally have a virtual monopoly on the board.  Before diving into the raw numbers, how does it look visually?  In a word?  Stunning. 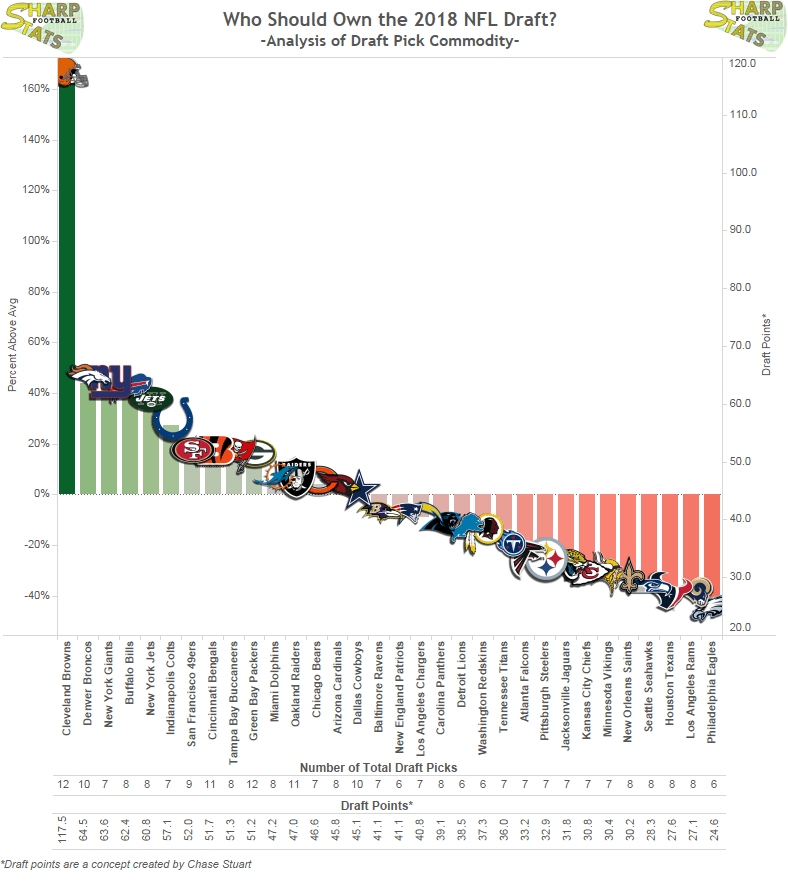 Bill Barnwell performed analysis of the most draft points in the NFL since the 1970 merger.  He broke the historical draft classes into two periods:  the “Classic” period from 1970-1992, and the “Modern” period from 1993-2017.

How well did Sashi Brown’s analytical front office approach set up this Browns team for success in the 2018 draft?

Heading into the 2017 draft (at this time last year), the Browns were sitting 96.7 draft points, but through trades, finished the draft with 86.9 draft points in total, which was the most in the “Modern” period (since 1993) until this year’s haul.

Sashi Brown’s analytical approach to the NFL draft netted the Browns back-to-back seasons of the most draft capital in the “Modern” period.  It should be obvious that a fair share of the cause of this relates to the fact that the Browns went 0-16 in 2017 after a 1-15 campaign in 2016.  Bad teams get the best draft picks.

But the war chest is overflowing for new GM John Dorsey, and it’s overflowing unlike anything we’ve seen in recent memory.  The 1991 Cowboys and 1982 Patriots are teams from a wholly different era of football.  What the Browns end up doing with Sashi’s haul is to be determined, now that he is no longer involved.  The value of his approach helped lead to the current position.  In just under two months, we’ll see how they draft and deal, and we can re-evaluate exactly how much capital they ended up with.  But at this point, it appears nothing less than a historic amount.

Browns ownership was quick to turn the sword on Sashi Brown, and try to pin blame on the team’s poor performance on what Sashi did in the front office. The same front office that implemented this insane strategy to “win” on Sundays (read this thread):

Step one, watch this video. Then I have some thoughts… https://t.co/OnHuPcNgFj

No, Sashi didn’t have control over on-field coaching strategy and decision making.  Yes, Sashi’s analytics in the front office made NFL history.  But because the coaches and players went 0-16, someone had to go.  Management decided Sashi was the one.  He was Cleveland’s dark knight.  At this time, looking at the landscape of what the Browns now have to work with thanks to Sashi, it’s impossible not to think that Sashi is the hero Cleveland deserves, but not the one it needs right now.  So, they’ll hunt him, because he can take it.  Because he’s not their hero.  He’s a silent guardian.  A watchful protector.

Scroll back up to that graphic of the 2018 Draft Commodity.  It’s unprecedented draft commodity dominance in an era designed for parity.  Gaze up at the tall, green tower of a bar that is Cleveland’s 2018 draft commodity.  Envision Sashi Brown standing atop the high tower, his cape flapping in the breeze, looking down on the rest of the NFL.  Like the Dark Knight himself.  Gaze up, tip your cap and pay your respects.  Thanks, Sashi.