The Cincinnati Bengals have become an aggressive pass-heavy team, giving Joe Burrow ($6,600) an elite ceiling every week in DFS lineups.

Although the Bengals started the year as a run-heavy team 一 possibly because Burrow was being eased back in after his 2020 season-ending injury 一 Cincinnati has a 63% pass rate dating back to Week 15. 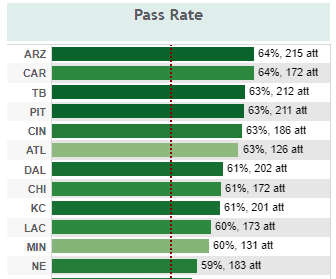 Burrow posted 37.8 fantasy points in Week 17 against the Kansas City Chiefs and another huge performance is certainly a possibility in this rematch.

One of Burrow’s biggest flaws is his tendency to make mistakes under pressure. Including the postseason, he ranks 21st (out of 39) in EPA per dropback versus pressure, compared to third overall when not pressured, according to TruMedia/PFF.

The Chiefs defense, however, generates pressure at a below average rate (29.4%, ranked 19th). Additionally, Kansas City ranks dead last in percentage of pressures leading to a -1 EPA or worse for the offense.

In other words, the Chiefs don’t generate much pressure, and when they do, it has minimal impact on the quarterback.

So it’s reasonable to believe Burrow could have more time to throw than usual against Kansas City, giving him another elite ceiling in this matchup.

If you want to build a stack based on the scenario in which Burrow is consistently kept clean in the pocket, consider pairing him with Tee Higgins ($5,700).

Higgins sees more usage when Burrow is not pressured (23% target share) than when he’s under duress (18%), according to TruMedia. 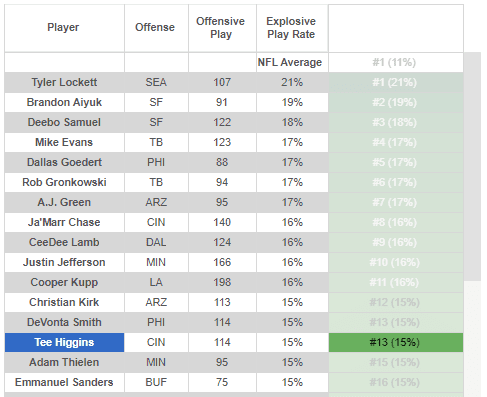 According to TruMedia, 78% of Higgins’s explosive plays occurred when Burrow was not under pressure, indicating he too might have a higher ceiling than usual in this matchup with Kansas City.

If you’re looking to fade the big-name tight ends on the slate (George Kittle and Travis Kelce), Tyler Higbee ($3,700) will be tempting 一 especially after he posted a season-high 23.5 fantasy points in his last meeting with the San Francisco 49ers.

However, the 49ers have been a tough matchup for tight ends this season, allowing only a 53% success rate when opponents target their tight ends. 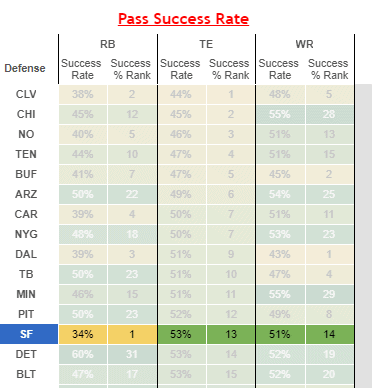 Higbee has scored three touchdowns against the 49ers this season, but those came on his only three targets in the red zone and accounted for half the touchdowns San Francisco allowed to tight ends all year.

Additionally, the 49ers have allowed an explosive play rate of 5% to tight ends, tied for the second-lowest rate in the league, limiting the chances Higbee produces strong fantasy numbers without the aid of a touchdown.