The Los Angeles Chargers Made Big Moves To Improve The Defense

One of the most interesting aspects of the NFL offseason is that it’s the one time when teams can truly tell us what they think they are and where they need to go. Between free agency and the draft, we get a glimpse of how teams approach that balance. Over the next week, we’ll look at a few teams and what their offseason plans signal.

We’ll start with the Los Angeles Chargers and their push to improve the defense and build it in the vision of their head coach.

The defensive results in Year 1 under Brandon Staley didn’t have the same immediate impact as what happened when Staley took over the Rams. The Chargers were 28th in EPA per play on defense and didn’t have the bodies to run the type of structure Staley wanted.

That type of shift also impacted how the Chargers structured their coverages. Before the bye, the Chargers still favored two-high coverages, using them 46% of the time post-snap, the fourth-highest rate in the league. After the bye, that went down to 36% as the defense favored rotating a safety down with a single-high coverage 52% of the time, the sixth-highest rate in the league.

The personnel moves the Chargers made throughout the offseason point toward getting back to what Staley originally set out to do. Trading for Khalil Mack gives the Chargers two potentially dominant edge rushers as he pairs with Joey Bosa.

Last year, as defenses across the league started to blitz less often, the Chargers had the 10th-highest blitz rate. They ranked 14th in pressure rate when they sent four pass rushers, but with Mack and Bosa that rate should rise while the Chargers can pick their spots to send extra rushers. With the Rams in 2020, Staley oversaw a defense that rushed four at the ninth-highest rate in the league.

While Mack adds another star on the edge, the pass rush wasn’t really the problem for last year’s defense.

Maybe the most important move for the structure of the defense was the signing of Sebastian Joseph-Day, who broke out in 2020 under Staley with the Rams and has been one of the best run-defending interior defensive linemen over the past two seasons. The Chargers also signed Austin Johnson, a 314-pound lineman who had a bit of a breakout as a full-time player with the Giants last season.

Even in the draft, the Chargers sought to beef up the interior with fifth-round pick Otito Ogbonnia. Ogbonnia is a 324-pound nose tackle from UCLA who won with brute strength against the run.

It’s clear the Chargers wanted to re-work that defensive line to improve the entire defense. “No matter what front you play, your front drives a lot of what you do from both in pass rush and with the run game,” general manager Tom Telesco said at this year’s combine. “Everything starts up front. You can’t get to third down or third-and-long if you can’t stop the run early — if they run it early.”

Teams, in fact, did run on the Chargers on early downs last season, because they could. Opponents ran on 51% of early downs against the Chargers in 2021, which was the seventh-highest rate in the league. Typically teams would love if opposing offenses spent more than half of their early down plays on the ground, but the Chargers allowed the second-highest success rate on those plays.

Because of that, opponents had the ninth-lowest average yards to go on third downs. Los Angeles had the third-worst EPA per play on third downs and allowed the highest rate of conversions (49.5%) in the league. 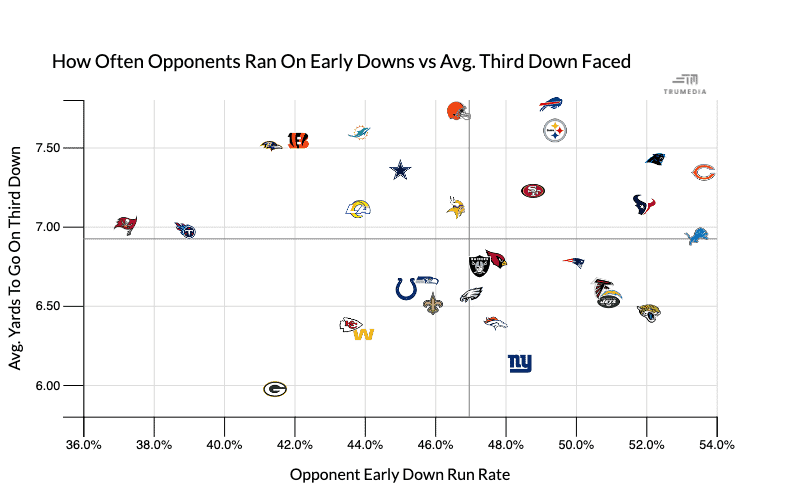 The additions of Joseph-Day, Johnson, and Ogbonnia — along with Mack and Bosa who are both plus run defenders on the edge — should discourage those easy runs.

Having those types of bodies inside can make players like Jerry Tillery even better. Tillery has been rather disappointing as a former first-round pick, but one place he has been productive is rushing the passer — he had 17 quarterback hits last season. Tillery has struggled to stop the run in his career, but now potentially lined up next to plus run defenders, that responsibility won’t fall as heavily on Tillery.

On plays when the Chargers want to use a five-man front, that could look something like Mack – Tillery – Joseph-Day – Johnson – Bosa. There’s equal parts pass rush and run-stopping ability along that line with depth that could cycle through.

The Chargers run a ton of zone coverage — the third-highest rate in the league last season — but Jackson could play a version of man on one side while the rest of the defense plays zone around him. With the Patriots, Jackson played in one of the man-heaviest defenses in the league (fifth-most).

Having one side of the field locked down, at least in theory, can take advantage of the versatility of the other defensive backs. Asante Samuel Jr. has the ability to play both outside and in the slot. As more pieces have been added to the secondary, Samuel’s role has been put in question, though that’s overlooking how good Samuel was when on the field last season.

Samuel ranked 41st among 93 qualified cornerbacks in Adjusted Yards allowed per coverage snap, which uses the Pro-Football-Reference formula to account for touchdowns and interceptions. That’s an impressive ranking for a rookie at a position that typically struggles in Year 1. Samuel’s production was similar to Patrick Surtain, the ninth overall pick in the draft for the Denver Broncos and a player already viewed as a rising star at cornerback.

Veteran slot corner Bryce Callahan was brought in after the draft to add another option in the slot. Between the Bears and Broncos, Callahan has effectively played the slot role for Vic Fangio. Callahan, though, was 70th in Adjusted Yards allowed per coverage snap in 2021, so he shouldn’t be seen as a plugged-in starter for that role.

It’s also clear the Chargers want to have the flexibility to play more defensive backs on the field. Los Angeles only used dime personnel on 11% of plays last season, which ranked 20th. The 2020 Rams under Staley used dime on 24.7% of snaps, which was the seventh-highest rate in the league.

As was the case with the other structural trends, some personnel deficiencies prevented the Chargers from using more defensive back heavy packages throughout the season. There were 160 plays when the Chargers used Derwin James, Nasir Adderly, and Aholi Gilman on the field at the same time in a three-safety look.

Those three-safety packages came in different looks, too. 44% of those plays were just in nickel personnel with two other corners on the field. 51% came in dime personnel, and 2% came with seven defensive backs on the field.

In the draft, Los Angeles added Baylor safety JT Woods in the third round as another piece to the coverage puzzle and safety rotation. Woods is an athletic freak (97th percentile 40, 92nd percentile vertical, and 88th percentile broad), who has the ability to play the ball with nine interceptions over the past two seasons and got his hand on the ball on at least 1.0% of his coverage snaps in each of the past two seasons, per SIS.

Having another option on the backend could allow the Chargers to have the best of both worlds in their defensive structure — allow the defense to run more two-high coverages and have a safety come down into the box. That could open up more possibilities for Derwin James.

Per SIS, James had 124 coverage snaps as a slot corner (0.47 yards allowed per coverage snap), 105 in the box (0.63), and 262 as a deep safety (0.31). With the ability to play well everywhere, freeing James up to move around the defense — from protecting the seams to slot coverage, to coming downhill in the box — could make all of the other pieces better.

James could act as a de facto linebacker in dime or lighter personnel and his ability to patrol the middle of the field. With more versatility around the defense, we can see more of what the Chargers wanted to do early in the 2021 season.

Against the Raiders in Week 4, the Chargers faced a second-and-9 near midfield. They came out in dime personnel with their three-safety look. James played in the slot near the line across from tight end Darren Waller as the Raiders were in Empty. 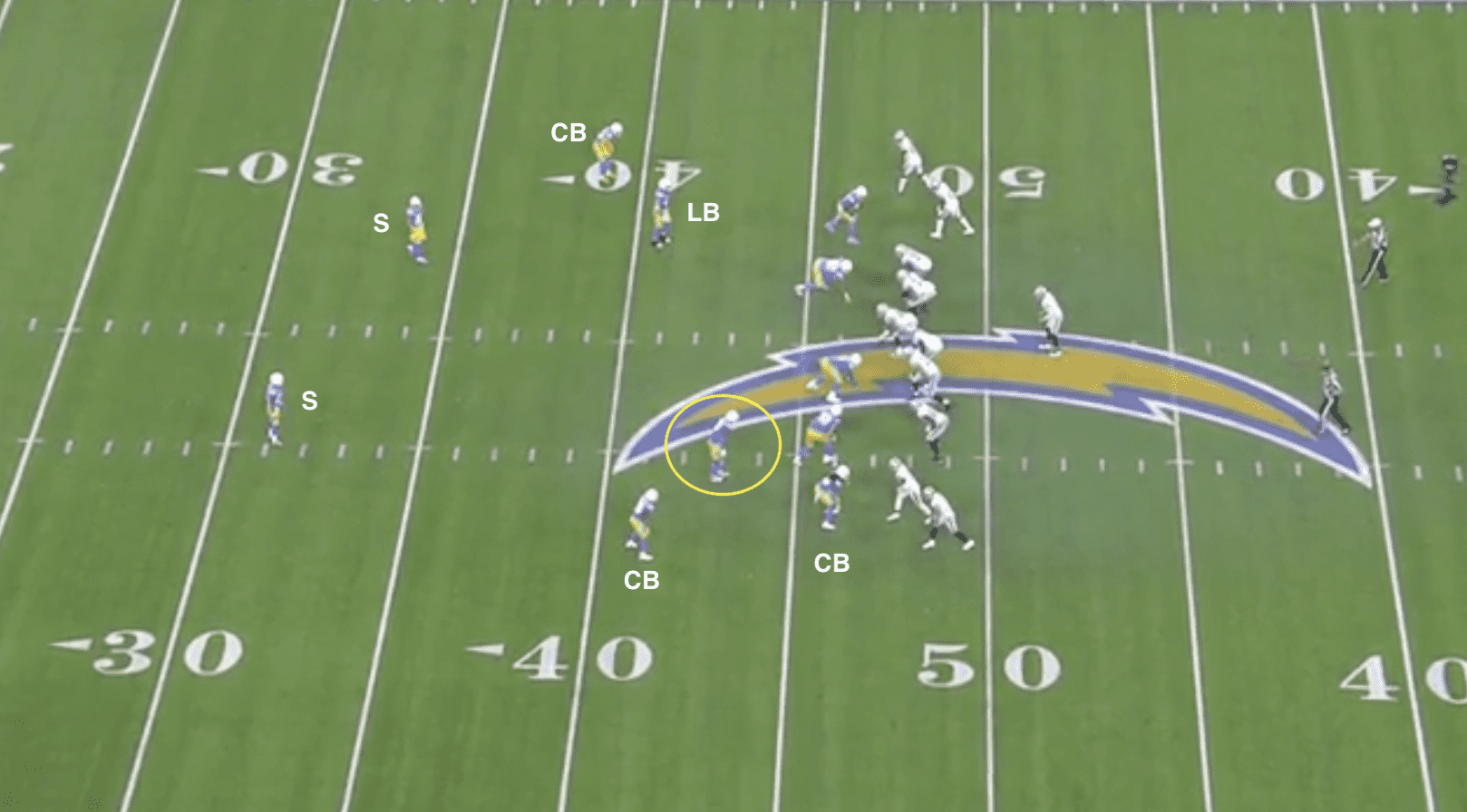 At the snap, the Chargers still rotated a safety down while James ran with Waller and gave up no space for what turned into an interception.

As other parts of the defense broke down throughout the season, James’s versatility put him in the position to cover it up. Now with better personnel all across the defense, the Chargers can use James’s skillset as a proactive measure instead of just a reactive one. We’ve gotten an All-Pro season from James and the improvements elsewhere could be a huge factor in getting that type of play out of him again.

The Chargers made every effort this offseason to improve that side of the ball. Matching what the defense could be with what the offense already was in 2021 could make the Chargers one of the most dangerous teams in the league. Improvements needed to be made to get there and there was no lack of hesitation in using any possible resource to do so.