Chargers: Please Read This Article and Pass on 1st and 10 Rushes this Year

At the conclusion of the 2016 season, the Chargers fired their coaching staff and hired Anthony Lynn as Head Coach. They kept Ken Whisenhunt as their offensive coordinator. But Lynn, a former NFL running back and longtime NFL running backs coach before taking over as the interim Head Coach in Buffalo in 2016, had a key influence in the direction of the 2017 Chargers.

See, Lynn cut his teeth under run heavy, defensive minded Rex Ryan in both NY with the Jets and in Buffalo with the Bills. And in his first head coaching job, Lynn’s direction was very clear and obvious: establish the run.

Much like 3rd downs are a reactive down, where coaches call plays based on the yards to go rather than a “philosophy”, second halves are reactionary as well. Teams will abandon their first quarter strategy based on the second half score, and will try to either bleed clock more often if leading, or to play much more aggressively if trailing. As such, there is no situation that tells us more about a team’s strategy than first down in the first half.

In 2015, under Mike McCoy, the Chargers were 50.7% run on first half, first downs. This was slightly below the league average (51.0% run). They were ever so slightly more pass heavy than average. But they were terrible when rushing. They averaged 3.15 YPC on first half, 1st and 10 runs, with Melvin Gordon posting 3.31 YPC on 215 attempts, the worst rate for any RB with at least 100 carries.

Had Mike McCoy and his coaching staff studied the rushing attack, they would have seen that the run game struggled immensely on 1st down. Perhaps they did study it. In either case, the Chargers substantially upped their reliance on the run game on 1st and 10 in the first half, moving from 50.7% run to 56% run. They were the 4th most run heavy team in the NFL in this situation.

On 1st downs in the first half, the Chargers recorded a 39% Success Rate, the second worst in the NFL. They averaged just 4.1 YPC, well below the league average of 4.6 YPC. RB Melvin Gordon delivered just a 36% Success Rate and 4.0 YPC. The decision to consistently run him on 1st and 10 was devastating and highly unintelligent.

Apparently still not studying the numbers in enough detail, the Chargers never realized how badly this was hurting their offense. They consistently ran the ball on 1st and 10 over the course of the entire season. Their weekly run rate is visualized below on a weekly basis in 2016: 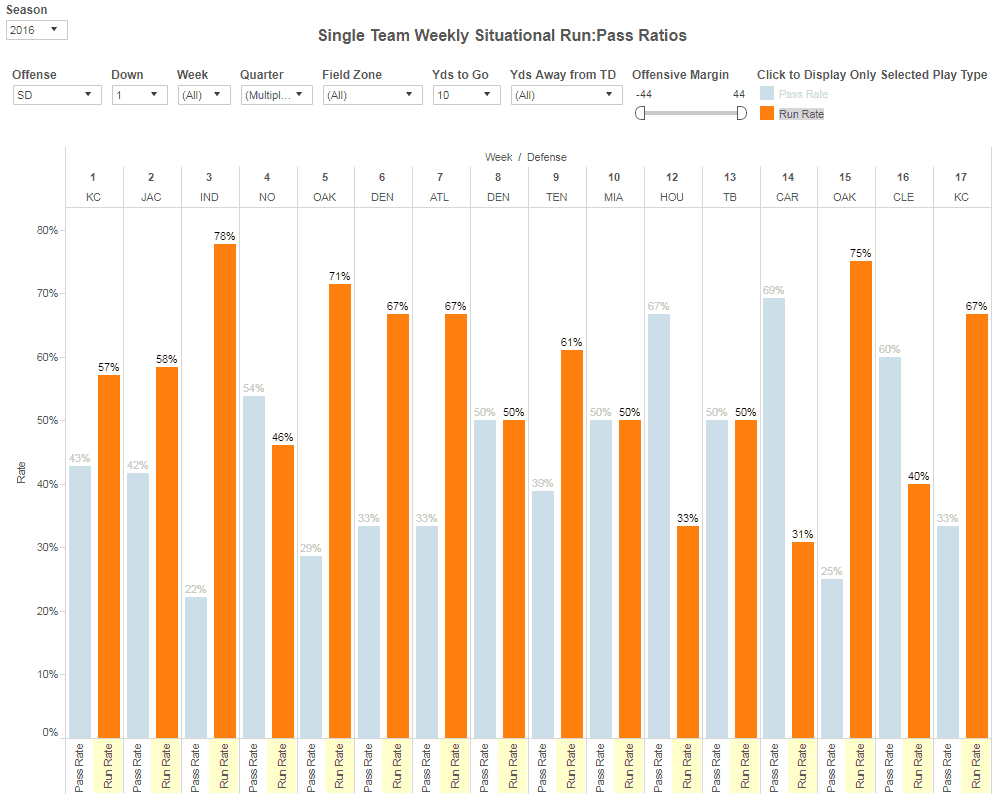 A big reason why they never realized the impact of this voluntary decision to run the ball on first down was the lack of an analytics department. So they did not have anyone expressly viewing this on a weekly basis in 2016 to measure just how inefficient it was to run the ball the fourth most often of any team on first half, 1st and 10 plays, and to deliver as poorly as they did.

Could they have used increased efficiency on these crucial first downs rather than giving their RBs a voluminous and inefficient workload? Absolutely:

There is no doubt that inefficient play calling on 1st and 10 directly caused them to lose many of these extremely close games in 2016.

But did the Chargers improve their decision making in 2017, and learn from their mistakes? No, they did not.

In 2017, Anthony Lynn took over the team. The run-first ideology was evident. Over their first eight games, the Chargers ran the ball on 60% of 1st and 10 plays in the first half, the NFL’s third-highest rate. This was even worse than what their 2016 campaign which was a 56% run rate.

Being predictable but successful is one thing. For example, the Dallas Cowboys were a very predictable first-down running team, but their Success Rate on such plays was 52%, fifth best in football.

Amazingly, the Chargers’ first-down rushing Success Rate was 23%, tied for worst in the league, but they ran on first down in the first half even more often than Dallas. Melvin Gordon averaged 3.0 YPC. Gordon posted a 29% Success Rate, ranking dead last (44th) of 44 RBs with at least 30 carries.

The negative impact of this decision was profound. The Chargers faced second and an average of 8.8 yards to go, fourth worst yards to go in the NFL. Thanks to many inefficient decisions coupled with poor kicking, as well as their terrible first down play calling, the Chargers went 3-5 in their first 8 games.

Unlike 2016, however, they finally made a change in 2017. After their Week 9 bye, the Chargers ran on only 46% of first-down plays, well below NFL average. They put more of the burden on Philip Rivers and less on Melvin Gordon. And guess what?

Running less predictably on first and 10 can help your RB and doesn’t mean it will hurt your passing game. That is because passing on 1st and 10 is one of the best times to pass in the NFL. The past two years:

This shift played a big role in the Chargers’ Week 10 near upset of Jacksonville. Instead of rushing on these first downs in the first half, the Chargers passed the ball 54% of the time, and Rivers produced a 57% success rate as compared to Gordon, who ran for a 25% success rate and only 2.3 YPC. On their TD drive to take the lead at halftime, the Chargers called pass plays on 3 of their 4 first and 10 plays. On Rivers attempts, he averaged 21 YPA and on Gordon’s lone run, he gained just 2 yards.

It’s evident in their weekly run rates how often the Chargers ran through the first 8 weeks, and how they improved and ran much less on first half 1st-and-10s over their final 8 games. Below you’ll see the Chargers eclipsed a 58% run rate in 5 of their first 8 games. Over their last 8 games, they never once hit a 58% run rate. 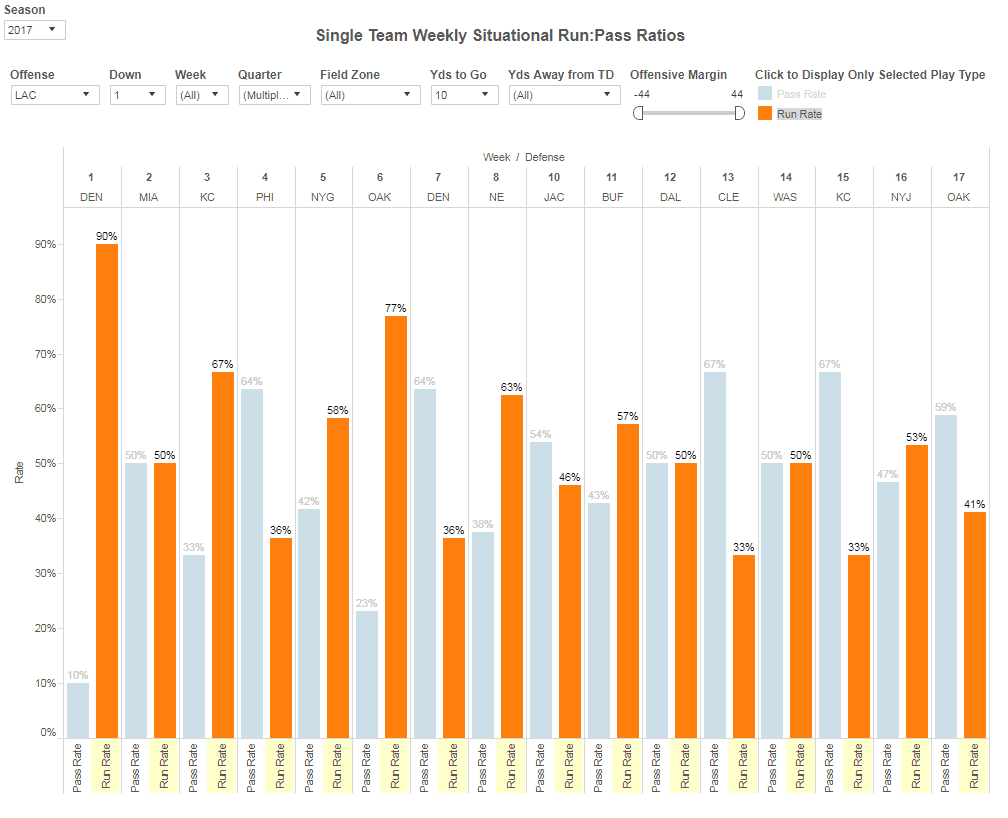 In 2017, the Chargers ran Melvin Gordon on 161 first downs even though he was the single worst first down rusher in the league.

The last two years, the Chargers have been terrible on first down when rushing. It literally has lost them games.

In 2018 the Chargers absolutely must stay highly efficient on first down in 2018 if they want any chance at having a successful season, especially because they will be without a massive piece to their success, TE Hunter Henry.

There is only one way to accomplish this goal: the Chargers MUST pass the ball more often on first down. It will lead to more wins. And they are actually built to do this:

Anthony Lynn grew up in the run heavy era of the NFL. Rex Ryan taught him that style in the late 2000s. The problem is that it is now 2018. There are many rules that have changed which now make passing much more effective than rushing. The worst thing a team can do is to predictably run the ball on 1st and 10. Yet that is what the Chargers did so far under Lynn. I cannot be more clear: Anthony Lynn, please ensure that Ken Whisenhunt passes the ball at an above average rate on 1st and 10 in the first half, rather than the 56% to 60% run rates your team used in 2016 and at the start of 2017.

Using 11 personnel more often will get their most dangerous weapons on the field more often. And that includes Tyrell Williams, who has been severely underutilized with the Chargers. LA needs to design more offense to get the ball to Williams in space, and allow him to coast for yardage, as he is incredible after the catch.

Check out the 2018 Football Preview book now at Amazon or in PDF to see more ways for the Chargers to improve their efficiency, dive into my outlook for their 2018 season, and to check out the player Evan Silva thinks has the best fantasy outlook in 2018.

“There are so many preseason NFL previews available that offer fans insight into the season, however, few dig as deep as Warren Sharp’s Football Preview, with a unique view of what really matters during the season. Sharp’s detailed approach is a must read for any football fan–and it’s one of my main summer reads.”

“Warren’s preview exemplifies the use of analytics and information in a way that should be interesting to any fan. It is more in depth than many teams in the NFL are using today. Every GM and coach would serve themselves well to read the analysis of their team. They would both learn something and immediately appreciate the benefit of the information. Some still live in a world where they don’t know what they don’t know. This has become a crowded field, but no one presents it better, and breaks down what it means better than Warren.”

“Warren Sharp’s Football Preview is the only book that will have something for everyone. It has illustrations and graphics for the visual person. It covers the analytical part of the game in many ways differently than I have seen. It has trends for people who like to bet the games, as well as philosophical thoughts on things that have happened in the past and how they might affect the future of the game. This book breaks down each team by every category imaginable and describes exactly what they did in every situation. If you coach any level of football, from youth to the NFL, you will assuredly receive valuable information… You won’t want to put it down.”