The NFL is a passing league. The smartest teams know you pass to get the lead and run to maintain the lead. Should it matter if you have the NFL’s worst rushing attack? If it’s all about passing, certainly teams can win without rushing well.

Enter the Detroit Lions, the worst rushing offense of the past 5 years.

That is not hyperbole. The Lions are literally #32 of 32 teams since 2013. From both an efficiency perspective as well as per an average yardage perspective. In efficiency, they’ve never ranked better than 25th. Beginning with most recent, Detroit finished third worst, eighth worst, sixth worst, fourth worst, and sixth worst in rushing efficiency over the last half decade. In terms of average yardage, they have averaged 3.71 yards per carry the past 5 years, the worst in the NFL.

What are the implications and ramifications of being such a bad run team?

With the NFL’s worst run game, the Lions have had to become the most pass heavy team in the NFL. Over those 5 years, they are the only team to pass the ball on over 61% of their play calls. While being pass heavy doesn’t sound like a bad thing in the modern NFL, it is bad if you’re terrible when you need to run, and choose not to run when it’s most advantageous to do so.

Because there are certain situations when rushing is more efficient than passing. Short yardage situations and red zone situations are two of the most valuable times to run the football.

But because the Lions were such a terrible rushing team, they had to go much more pass heavy, it screwed their play balance. No team passed more often in short yardage situations than the Lions. Instead of 56% run, like the league average, Detroit was 40% run. 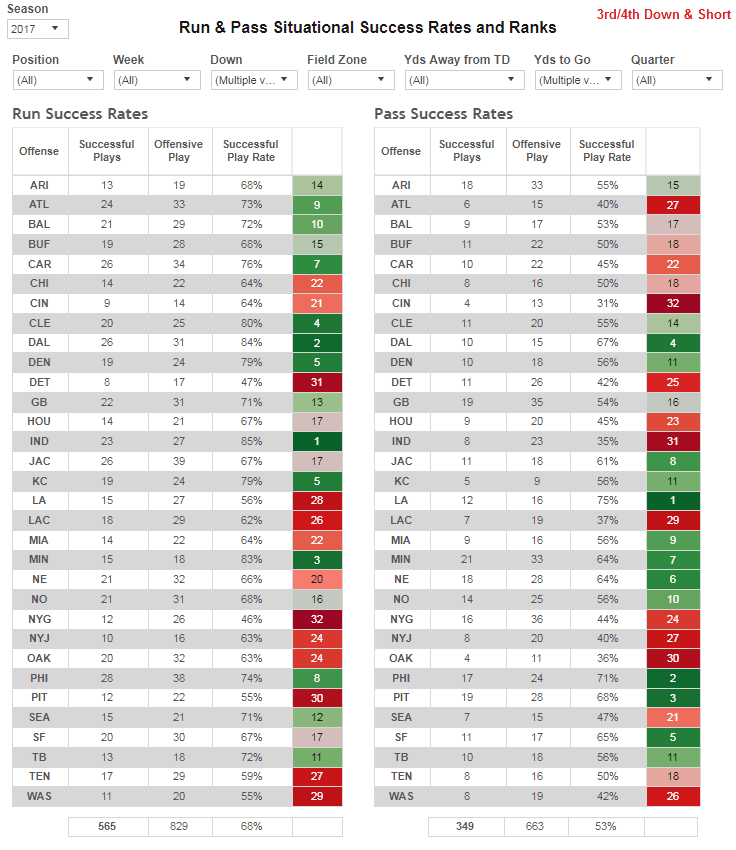 Rushing is far more likely to convert a first down in these situations than is passing. And as a result of doing the lesser efficient play type (passes) more often, coupled with the horrible rushing production when they did choose to run, the Lions were dead last in first down conversion rate on 3rd or 4th and short the past 2 years. 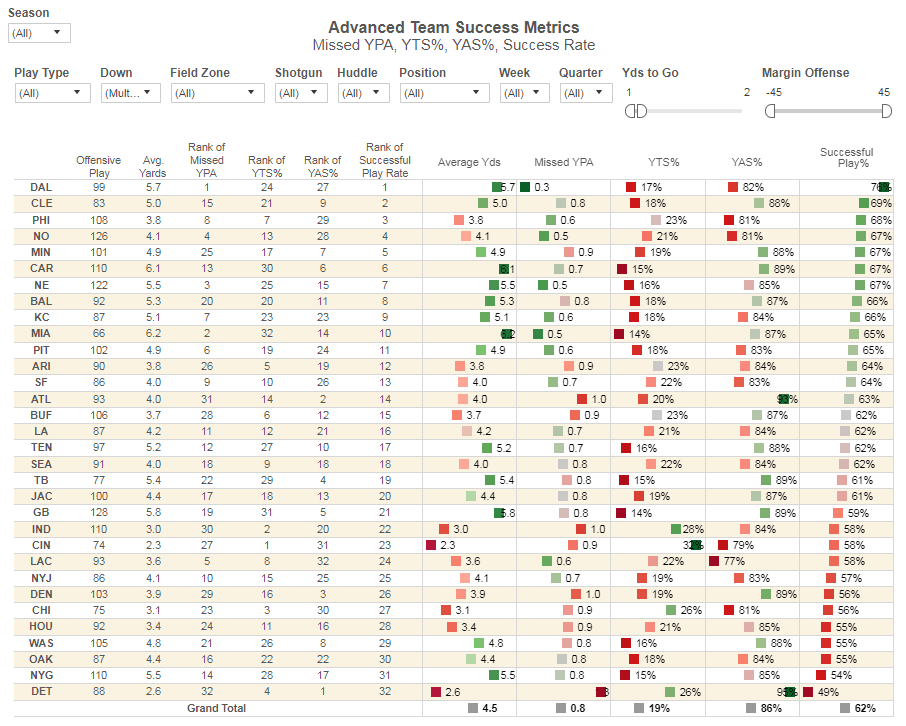 Those are the situations where the run game really hurts you. And the consequences of being the NFL’s worst short yardage team are grave.

It means more failed conversions, more punts, fewer points, less time of possession and every other negative that comes with the territory.

The tangible impact of short yardage failures was abundant.

Most of these were one-score losses where a single third- or fourth-and-short conversion could have turned that loss into a win.

Implications Inside the Red Zone

Because the Lions were so terrible rushing the football, they apparently felt almost obligated to pass the ball when they ventured into the red zone. They were the most pass-heavy team inside the red zone, with a 66% pass rate the last two years, 11% above average and 4% above any other team. 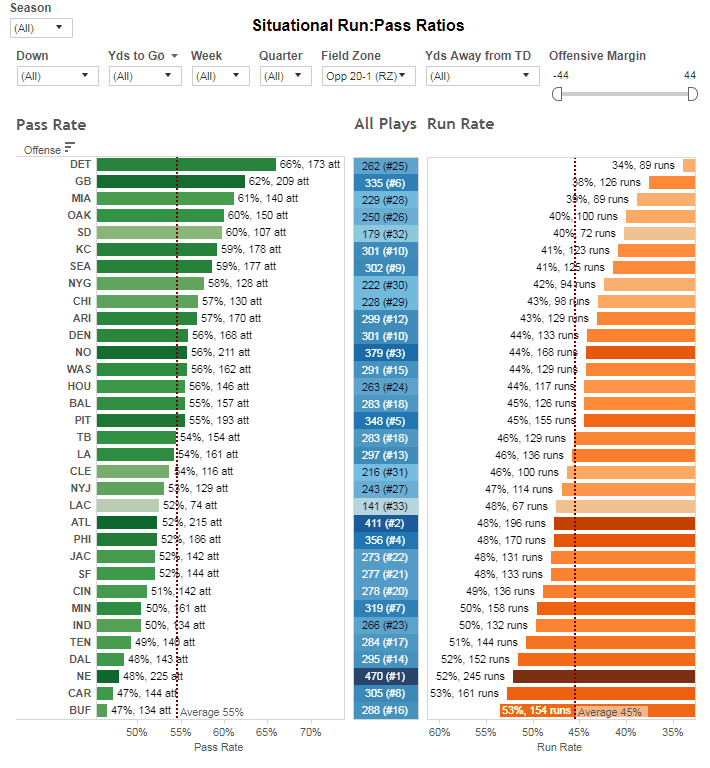 Unfortunately, these passes were not successful, in part because they were too predictable. Last year, the Lions were successful on just 31% of their red zone passes, 6th worst in the NFL. But when they ran the ball, they produced a 48% success rate (2% above league average), 12th best in the NFL. And yet fearing their run game, they passed the ball twice as often as they ran it, feeding more and more into their inefficiency.

League-wide the last two years, red zone rushes are 9% more successful (48%) than red zone passes (39%). But teams still pass the ball 55% of the time. [Truthfully, teams should run the ball more often in the red zone than they do.]

The Lions were completely skewed with their play calling due to lack of faith in their run game. Their run game was more successful, but due to witnessed inconsistency, they passed the ball way too often, way above average, and it was highly detrimental.

HC Matt Patricia and GM Bob Quinn set out to improve their run game this offseason. They drafted first-round LG Frank Ragnow and traded up for second-round RB Kerryon Johnson.

In his first preseason game, Johnson gained 4.9 YPC and that’s with a massive run wiped out due to a holding penalty. He also gained 8.3 YPA on 5 total targets.

The Lions also have LeGarrette Blount and receiving back Theo Riddick. Ameer Abdullah may be the odd man out when the team cuts down to 53, but the only reason is that this RB corps is stacked with contributors, leaving the Lions in much better shape than in years past.

On the down side, the Lions will be facing the NFL’s 2nd most difficult schedule of run defenses in 2018 by my projections. But that shouldn’t limit the optimism of the changes in store for Detroit in 2018.

By being a better run team, Detroit should find the following benefits in 2018:

If this year’s Lions can establish improved run-game efficiency, they will get more trips to the red zone and should be more confident in calling more run plays when in the red zone, further raising their ceiling and increasing their point totals.

Playing less predictable is more important now than it has ever been in the NFL, and the Lions were playing with handcuffs the last 5 years, being the NFL’s worst run team and the most run-adverse team. Without those handcuffs in 2018, it won’t just be the offense whose efficiency increases, the defense will find themselves in more favorable situations as well.

This is still a pass-first league, but it cannot be overstated how much a bad short-yardage run game can impact overall performance, as can too much passing in the red zone. We’ll get to witness the changes in Detroit first-hand this season, and I’m looking forward to it.

Check out the 2018 Football Preview book now at Amazon or in PDF to see more ways for the Lions to improve their efficiency, dive into my outlook for their 2018 season, and to check out the player Evan Silva thinks has the best fantasy outlook in 2018.

“Warren’s preview exemplifies the use of analytics and information in a way that should be interesting to any fan. It is more in depth than many teams in the NFL are using today. Every GM and coach would serve themselves well to read the analysis of their team. They would both learn something and immediately appreciate the benefit of the information. Some still live in a world where they don’t know what they don’t know. This has become a crowded field, but no one presents it better, and breaks down what it means better than Warren.”

“Warren Sharp’s Football Preview is the only book that will have something for everyone. It has illustrations and graphics for the visual person. It covers the analytical part of the game in many ways differently than I have seen. It has trends for people who like to bet the games, as well as philosophical thoughts on things that have happened in the past and how they might affect the future of the game. This book breaks down each team by every category imaginable and describes exactly what they did in every situation. If you coach any level of football, from youth to the NFL, you will assuredly receive valuable information… You won’t want to put it down.”