There are… questions about the offense for the San Francisco 49ers, especially after Sunday night’s performance against the Denver Broncos. There are fewer questions about the defense, which is one of the league’s best units though three weeks of the season.

San Francisco ranks first in yards per play, second in points per drive, tied for first in three-and-outs per drive, third in EPA per play, and fifth in defensive DVOA. Pick your stat, the 49ers come out looking pretty good.

The 49ers have played the Bears in a monsoon, Seahawks, and Broncos, so the quality of opponent isn’t the toughest early in the season but the structure of the defense and how San Francisco has been successful so far is an excellent sign going forward.

This is another leap forward under second-year defensive coordinator DeMeco Ryans. The 49ers ended last season on a high note defensively and that has continued through the early part of 2022. But the way in which this San Francisco defense has worked isn’t just a repeat of last season.

That rate might be more difficult to sustain with the injury Azeez Al-Shaair suffered Sunday night, but Demetrius Flannigan-Fowles filled in and played well in a short stint.

What makes those linebacker rates possible — and the role of the third linebacker easier — is the play of Fred Warner and Dre Greenlaw, who have both played 100% of the defensive snaps over the first three games.

There is no team playing linebackers more often and there might not be a team that asks more from its linebackers, especially in coverage. Warner has been a special coverage player since he entered the league and as continued in Year 5. San Francisco is fifth in DVOA on passes to the middle of the field. The Niners rank first in passes to the short middle and first on short passes overall.

Having a player like Warner in the middle of the defense opens up a lot of other possibilities because of what he can do and where he can line up. We typically highlight linebackers who can run sideline to sideline and Warner can do that, but his best ability is how he can play vertically. Warner is as much of a threat backpedaling deep as he is coming downhill into the backfield.

Take these two plays from Sunday night against the Broncos. Below, Warner lines up 10 yards off the line of scrimmage but reads the offensive linemen coming out to set up a screen. He charges in, avoids the center, and breaks up the pass as it gets to the back.

On another play, Warner starts lined up in the A-gap along the line of scrimmage but drops out at the snap and runs down the field with the slot receiver from the opposite side of the formation, Jerry Jeudy.

Trusting the linebackers to get to their spots has allowed the 49ers to change up some pre-snap looks and put the linebackers up near the line to show pressure. On a third-and-9 in the second quarter, the 49ers had Warner over the center and seven defenders within five yards of the line of scrimmage. 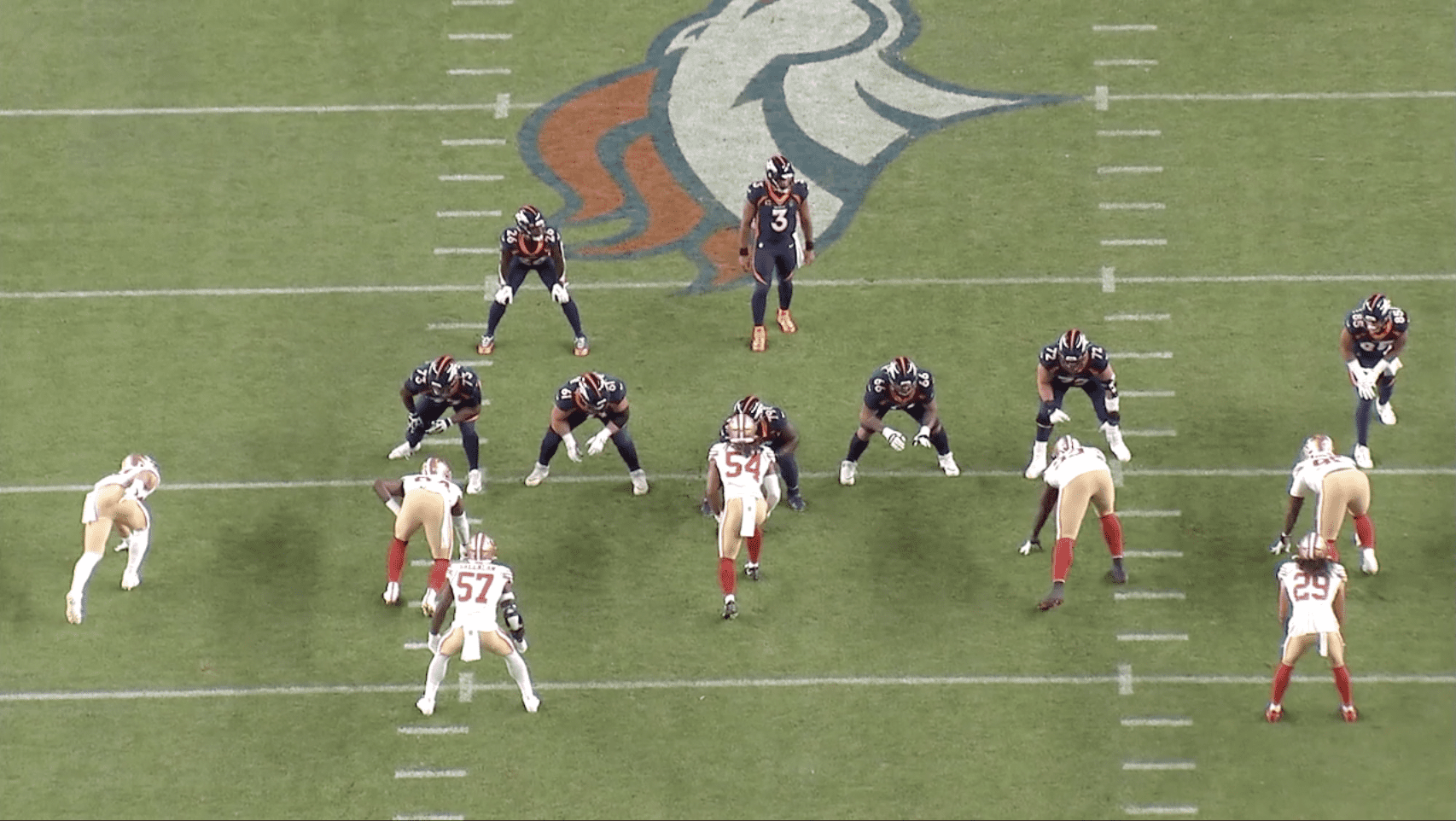 At the snap, San Francisco only rushed four as Warner, Greenlaw, and safety Talanoa Hufanga dropped into zone coverage. Russell Wilson panicked and fell forward for just a two-yard gain. 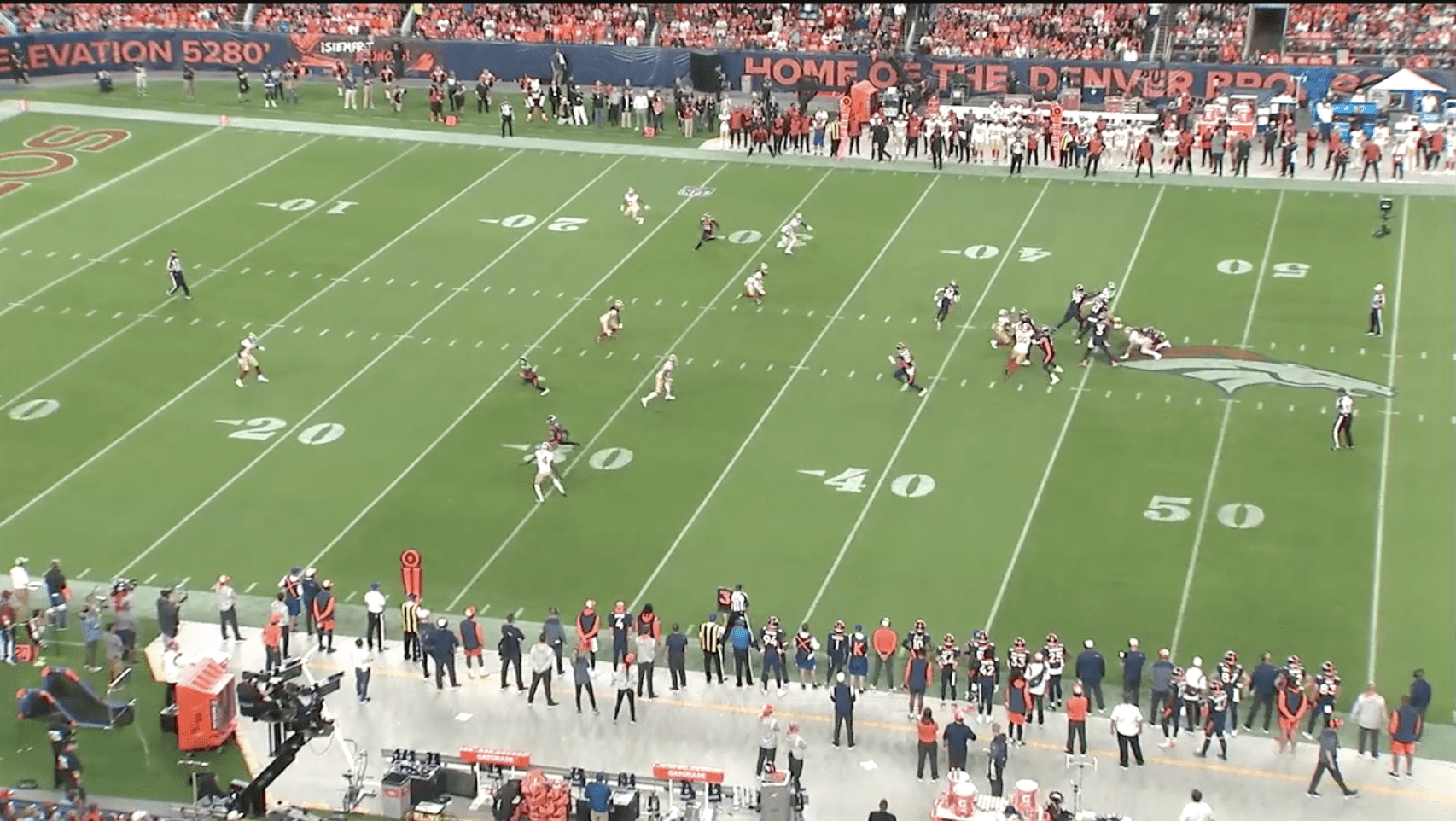 Hufanga’s emergence has also been huge for the middle of the defense. He already has three passes defensed, including an interception, to go along with four tackles for loss — at least one in each game. His ability to move around the defense — he’s played 54 snaps in the box, 101 deep, and 14 in the slot, per PFF — has also helped allow the 49ers to play around with their looks up front.

Against the Seahawks, the 49ers showed a similar mugged-up presnap look, only rushed, three, and still got pressure up the middle as Hufanga tipped a rushed pass from Geno Smith.

San Francisco currently has the fifth-lowest blitz rate among defenses through three weeks at 18.8%. They also have the league’s second-best pressure rate overall. Blitzing hasn’t worked out for the 49ers just yet — they’re 30th in EPA per play and 18th in pressure rate — but those mugged looks have helped opened up one-on-one matchups for when the Niners only rush four and there have been some flashes when they do bring the extra rushers from those looks.

San Francisco has played the fourth-highest rate of zone coverage in the league and the trust in the linebackers along with overall communication has allowed the 49ers to pass off routes at all depths of the field seamlessly.

So many offenses around the league try to make the point to create mismatches by lining up or motioning a receiver to get lined up against a safety or linebacker. For San Francisco, those players are just as strong, if not stronger, in coverage than the cornerbacks so those mismatches don’t exist. With the high rate of zone coverages, the 49ers also aren’t tied into those types of one-on-one matchups.

Through three weeks, the 49ers are first in EPA per dropback on plays with motion, per TruMedia. That highlights how sound the communication and structure of the coverages have been so far.

With so few immediate open areas underneath, the 49ers have made it difficult for opposing offenses to push the ball down the field.

The 49ers are the best defense by EPA in throws up to 10 yards past the line of scrimmage through three weeks and have allowed a first down on just 17.5% of those plays. The league average is 28.3%, per TruMedia.

Over the past two weeks, just 7.8% of pass attempts have gone 20 or more air yards. That has forced opposing offenses to funnel the ball into the congested short areas of the field and the Niners have faced the seventh-lowest aDOT among defenses through three weeks. When the offenses have been looking to go deep, the pressure from a strong defensive line is there.

Few defenses are working so well together and in a way that opposing offenses have to play into the defense’s strengths. With an offense that has struggled, this defense could have more on its plate to carry a team back into contention after a 1-2 start.

Things could get tougher as they play the Rams twice in the next five weeks, along with a game against the Chiefs in Week 7, but this unit has been so fundamentally sound, the success hasn’t just been because of weak opposing offenses. Week 4 will be the unit’s biggest test, but this could be one of the league’s best throughout the season.