Daniel Jones was a polarizing NFL prospect. Even the start to his NFL career has been polarizing, between the game-winning touchdown run against the Tampa Bay Buccaneers in his first start to a string of bad rookie-mistake filled games that followed.

Even the stats don’t necessarily agree on Jones’s season to date. He’s 15th in ESPN’s QBR (though that’s heavily weighted by his very favorable Tampa Bay game and rushing value overall) and he’s completing 1.2% of his passes above expectation, per Next Gen Stats, which is also 15th among quarterbacks. But then he’s also 24th in yards per attempt, 26th in Adjusted Net Yards per Attempt, and 31st in DVOA.

Nowhere is there a bigger gap in Jones’s on-field performance than on deep passes. So this point of this exercise is to answer what should be a simple question, but might be slightly more complicated: is Daniel Jones a good deep passer?

Now, this wouldn’t be a very interesting question if there were not multiple factors to explore on the way to an answer. What raised this question, to begin with, is the massive difference between Jones’s accuracy and completion percentage on deep throws this season.

Per Sports Info Solutions, there have been 25 quarterbacks who have thrown at least 20 passes that have traveled at least 20 yards beyond the line of scrimmage. Of those quarterbacks, no one has thrown on-target (a pass considered catchable) more than Jones at 67.9%. But, no quarterback has completed fewer of his deep attempts than Jones at just 21.4%. A higher percentage of Jones’s deep throws have been accurate and not completed than Josh Allen, Jared Goff, Mason Rudolph, Ryan Fitzpatrick, and Patrick Mahomes have thrown accurately overall. 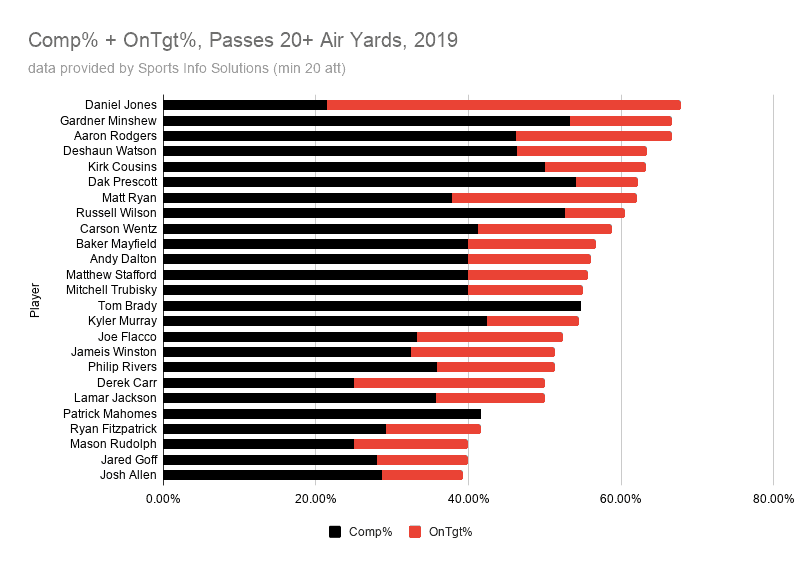 On one hand, Jones has been a very good deep passer, arguably the best by accuracy. On the other, he’s been a very bad deep passer because fewer than a quarter of his attempts (barely over a fifth) have been completed. So, again, that leaves us to wonder what is going on and what is the disconnect?

This also wouldn’t be an interesting question — or one worth writing about — if the answer was along the lines of “that will likely regress to the mean and we’d expect Jones to be better going forward.” That might be the case to some extent, but the type of deep throws Jones has made could complicate that.

Before we go further, we can give a brief background into the type of quarterback Jones has been. At Duke, Jones was asked almost exclusively to execute in the quick game with nearly three-quarters of his drop backs lending themselves to one read. Jones has been the type of quarterback who knows where the ball is supposed to go and has thrown it to that spot, even if it’s not necessarily open.

That has continued in the NFL. No quarterback has thrown into tight windows at a higher rate this season than Jones at 26.9%. When I looked into the rate at which quarterbacks have been throwing into tight windows before the season, the research showed throws into tight windows decreased completion percentage, touchdown rate, and yards per attempt, while it increased the likelihood of an interception.

For Jones, this is happening on all types of his throws. Per Next Gen Stats, there are five qualified receivers who have an average of two yards of separation or fewer per target this season. Two of them are Giants — Golden Tate and Darius Slayton.

There are two factors that go into this. It’s part receivers struggling to separate — Slayton is fast and is targeted down the field often where separation decreases, but he hasn’t shown a consistent ability to get behind defenders with his speed — and Jones’s insistence to throw the ball quickly when his read is there, even if it’s not open yet.

These throws into tight coverage play a big part in Jones’s success or lack thereof on the deep ball.

The best example of this was the Week 5 game against the Minnesota Vikings. Jones attempted eight passes that traveled at least 20 yards downfield. He was on-target for six but completed just one pass.

Let’s look at a few of those throws to see what happened.

This throw came midway through the first quarter on a 2nd and 8. Jones has Cody Latimer in one-on-one coverage to his left. The Vikings send pressure and Jones floats the ball up trusting the receiver to beat the coverage. The ball is accurate, but there is little separation and it’s a jump ball between the receiver and cornerback.

Here’s a throw late in the fourth quarter with the Giants behind. On a 3×1 set, Sterling Shepard was the middle receiver to the trips side on the left. He runs his route straight into end zone and Jones throws up a ball to give him a chance. Again, the pass is catchable but given the lack of separation from the cornerback, the actual reception was difficult to make.

After going back and watching Jones’s deep passes, there are plays like this all across Jones’s film this season. He won’t hesitate to give his receivers a chance to make a play on the ball, but the reality is those plays aren’t likely to end up in a reception.

The biggest misconception is when those throws get labeled “50-50” balls. That might account for the receiver and defender having an equal shot at the ball in the air, but in terms of how likely that pass is going to be completed for the offense, those might be “30-70” balls at best. They don’t work out in the offense’s favor at a high rate.

When they do connect, say like Darius Slayton’s touchdown catches against the Detroit Lions in Week 8, they look beautiful — a quarterback and wide receiver on the same page, a ball perfectly placed, and the receiver fighting in the air to take control.

But that’s not a sustainable way to complete passes — for either the quarterback or receiver — and those types of throws will far more likely be incompletions than completions.

Let’s go back to the Vikings game for another kind of example. This ball again goes to Slayton. Before the snap, the Vikings switched their safeties as Harrison Smith and Anthony Harris swapped sides of the field. Jones read one-on-one coverage with Slayton on Xavier Rhodes, who has been picked on one-on-one by almost every team he’s faced. Jones lofted the ball up for Slayton but with enough air under it, Smith had time to make it over and knock the ball away.

It’s another pass that is accurate and catchable but has a realistic completion percentage fairly close to zero. This is also an issue with some of Jones’s throws — a hesitation in the release just long enough for a defender to make a play. Jones waited just a tad too long and had to see Slayton turn to the corner on Rhodes before he threw the pass instead of trusting the receiver to get open.

What does this mean?

What we have from Jones so far are a lot of technically accurate passes that have a low probability of resulting in completions. It explains a fair amount of the difference between his on-target percentage and completion percentage. (There have also been a few drops, but not enough to swing the completion percentage into a significantly better number — also plenty of quarterbacks deal with drops and we’re looking at the other factors.)

Projecting ahead, the accuracy is a good thing to have. He’s not likely to remain the league’s most “accurate” deep passer — in fact, year-to-year correlation on deep on-target percentage is lower than completion percentage — but Jones could also be missing wildly on those throws and that’s not the case. That’s positive.

But on the other hand, there’s not a whole lot that can easily be fixed this season. A simple answer could be to get receivers who have the ability to separate deep, but the Giants traded a player who could do that fairly well, and have nearly $19 million tied to Tate and Shepard next season. There could also be some help in scheming receivers open down the field, but that has not been a strength of the current Giants’ coaching staff either.

Jones could also help himself out by anticipating better and not feeling the need to force so many balls into tight windows.

So then what’s the answer to the original question? Is Daniel Jones a good deep ball passer?

This might have more to do with how we’re going to qualify the word good. Is Jones an accurate deep ball passer? Sure, balls have generally gone where they needed to be. Is he an effective deep ball passer? No, not at the moment. The further passes go past the line of scrimmage, the less likely they are to be complete. Add in close defenders, and that likelihood drops even more. That’s what Jones is throwing against right now.

There are attributes to like when Jones has gone deep, but how valuable those can be all depend on how Jones and the Giants adapt going forward.