Lack of Evolution on First Down: Running Backs (Including Gurley) should Run Less

When the Rams signed Todd Gurley to a four-year, $60 million extension with $45 million in guarantees, some claimed this marked the dawn of a new era. The era of the running back. I will admit, running backs have evolved a ton the last two decades. But just because certain running backs are ultra talented, that does not mean teams should be running the football more often.

My contention is that teams are actually running the football too often. And they haven’t learned their lesson over the last two decades. In the 3 years from 2000-2002, on first-and-10 in the first half, teams called runs 51% of the time. The last 3 years, teams are still calling runs at 51.2% of the time. And yet passing the ball has become substantially more successful than rushing, in part because of rule changes and in part because teams are more adept at calling pass plays which deliver more consistency and a deliver a higher floor.

Examining league-wide tendencies over the last 20 years on first-and-10 in the first half, it’s evident teams have yet to match play call with efficiency.

Run rates on first-and-10 in the first half have not changed significantly, but production from the passing game has increased substantially. In large part, it’s come from a 7.2% increase in completion rate, from 58% in 1997-1999 all the way up to 65.2% in the last three years.

The concern with first-and-10 passing has always been the low floor. Run plays, even bad ones, will generally earn 2-3 yards, setting a team up with 2nd and 7-8. And teams feel like this allows them to run the ball again to create a third and manageable, or to pass the ball and set up third and short.

But that low floor with passes is not nearly as low as it once was. Teams are able to deliver a substantially higher floor on first-and-10 passes in 2017 as compared to 1997. Yet they are not taking advantage of it. League-wide, play callers are still stuck in the play calling they learned from their predecessors, and are running the ball far too often.

The old “establish the run” oligarchy has seeped into the bloodstream of most NFL offenses. Teams legitimately believe it is physically and psychologically important for them to run the ball early to create a perception of “we are here to do the bullying today.” However, the data proves this to be a flawed tactic. Trying to overpower the opponent in the run game early on, when all the edges in the passing game get placed on the shelf for use at another time, is a fool’s errand.

What about the era of the running back?

While I certainly admit teams need to call plays to emphasize the talent on their roster, I will also argue that overspending on the running back position in today’s football era is not a wise, long term strategy. From Bill Barnwell’s article today:

Barnwell later added: From 2005 to ’07, there were 11 backs who either started, continued or finished a streak of two or more seasons with 1,200 rushing yards or more. Over the past three seasons, the only one to accomplish that has been Bell. It’s a selective endpoint, but the lack of consistency is clear.

As the salary cap increases, teams will have more money to spend on all positions. Inevitably, running backs will (and should) make more money than they were over the last few years.

Five years ago, the top-10 most expensive RBs hit the cap for $8.36M. Prior to Gurley signing his extension, entering this year that number was down to $7.54M. Compare that to other positions: 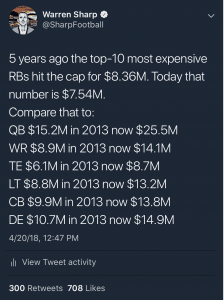 The key takeaway is that positions that revolve around the pass are being paid more and the run game is not. But the run game shouldn’t be paid less than it once was, and it eventually will reset given the increased salary cap.

But if given the choice, I wouldn’t advise allocating a substantially larger percentage of my cap to a running back just because I could. It will take away from your ability to spend on the passing game at the positions which are vital to success, on both offense and defense.

While running backs can do more in 2018 than they did ten and twenty years ago, teams need to utilize them more intelligently as early down receivers and less as early down rushers. If teams begin to call plays more intelligently, 2018 won’t mark the “era of the running back” even if some of the best start to get paid more. More than ever, it is a quarterback driven league. And teams need to pass more, not run more.

The most obvious and typical time to involve a running back is on first-and-10. But as I mentioned above, it’s become far more efficient to pass on first-and-10 than it once was.

If teams called a more optimal game, they would run the ball more on short yardage and inside the red zone and would pass the ball more in all other situations including on first-and-10. Ultimately, this means fewer rushing attempts in general. (I’ve long discussed how to use running backs more efficiently in the early down passing game, and won’t dig into that in this article)

Looking at success rate, over the last two years, first down passes have been more successful (53%) than first down rushes (45%). Removing two-minute situations and isolating one-score scenarios, passing is 9% more successful and leads to a gain of 3.2 more yards per play on average (7.2 vs 4.0). Yet teams run the ball 54% of the time on these neutral 1st and 10 situations. 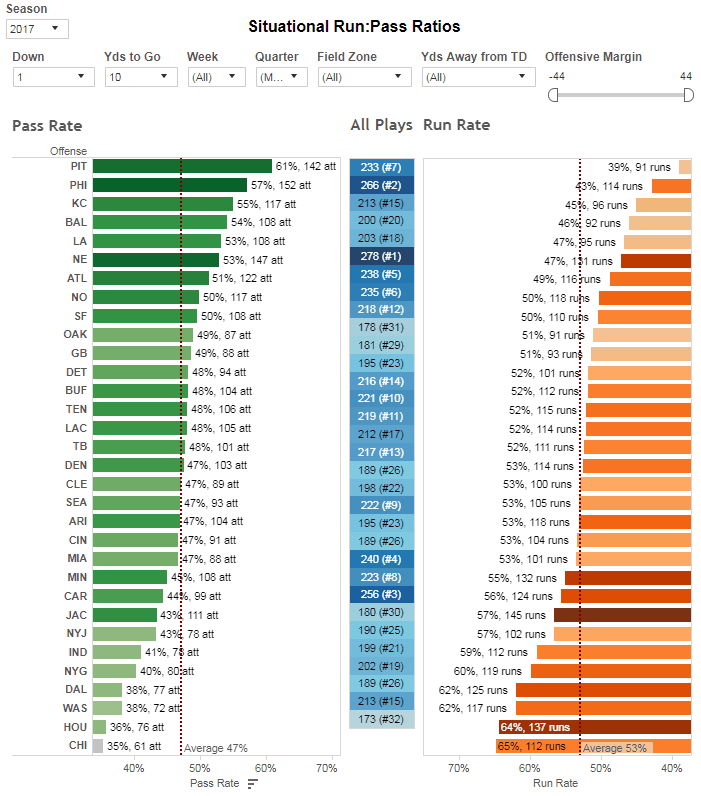 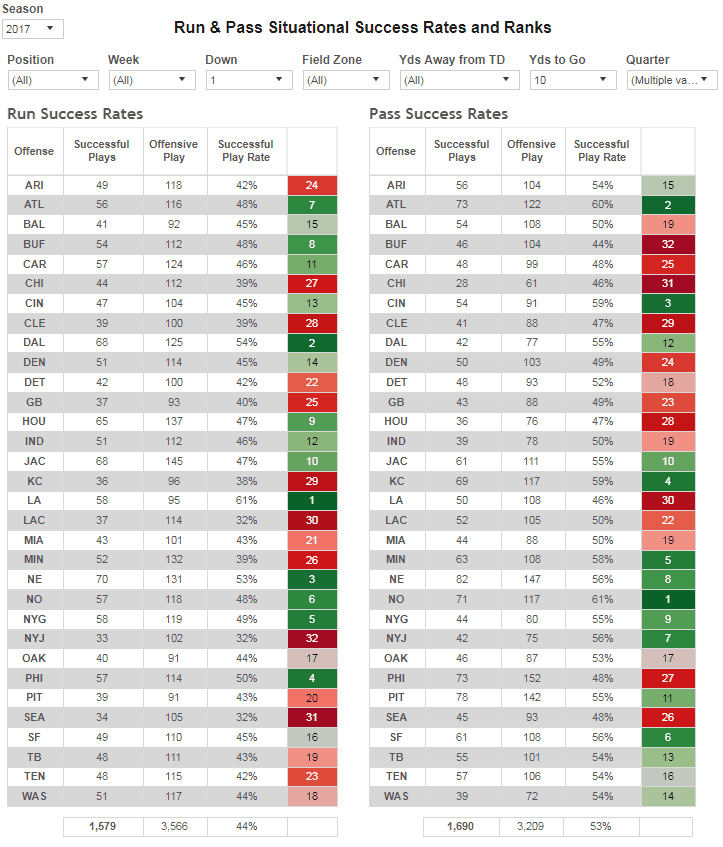 As we can see, many teams with younger or inexperienced QBs tended to rely more on the run. I’ve long suggested that running more on first-and-10 to “protect” an inexperienced quarterback actually will backfire because it leads to more third-and-long situations in obvious pass situations, whereas passing on first-and-10 when the defense is playing with base personnel and isn’t sure what type of play you are going to call is far more efficient.

But of the 5 teams who called the highest rate of run plays, three had veteran QBs (Eli Manning, Kirk Cousins and Dak Prescott).

The Redskins were the most confounding team. They went 62% run, yet these runs produced just a 44% success rate and 3.4 YPC. Meanwhile, passes were 10% more successful (54%) and produced 6.6 YPA.

It shouldn’t be a surprise to see some of the NFL’s best and most efficient teams among the most pass heavy, including the two teams that met in the Super Bowl (Eagles and Patriots) as well as other playoff teams with good offenses including the Steelers, Chiefs, Rams, Falcons and Saints.

The point here is that regardless of whether you have a young QB in his second year after a underwhelming rookie year or you have a passable veteran or you have a NFL-great QB, passing the ball on first-and-10 is more efficient and sets your team up in better situations.

On average, teams ran the ball 57% of the time in first quarter first-and-10s over the past two years. However, data shows this to be the worst time to run, as rushes produce a 44% success rate compared to a 55% success rate from passes. In the typical, predictable NFL, leave it to teams to do something more when it’s even less efficient to do it.

In the first quarter of games, it’s the least efficient time to run the ball on first-and-10, yet teams run it the most.

Isolating even further: inside a team’s own 40-yard line in the first quarter, running plays on first down produce a 43% success rate—14% worse than passes—but teams call for these plays 57% of the time.

A great example of the inefficiency can be seen on a team like the Buccaneers. Seemingly unwilling to “throw Jameis Winston to the wolves”, the Bucs called 67% run plays on 1st down in the 1st quarter for the last two years, the highest rate in the NFL. These run plays were successful just 43% of the time and produced only 3.6 YPC. Meanwhile, passes were successful 67% of the time (+24%) and teams gained 7.5 YPA. Winston’s first down passer rating was 95.9 in the first quarter.

After seeing this run-first strategy fail in 2016, the Buccaneers continued it in 2017, apparently unaware of the analytics that showed how disastrous its impact was on the offense. In 2017, rushes gained just 3.3 YPC while passes gained 10.8 YPA and were 31% more successful, with Winston delivering a 117-passer rating. Yet the team still went 63% run.

Stuck in the Past

Teams are stuck in the past. They feel it’s of-value to establish the run. This is a -EV strategy. Teams should not run on first down in the first half to “establish the run”. We need to change the philosophy of “establish the run” to “establish the lead” and that comes by passing early and allowing teams to run late. First-and-10 pass plays are more successful, they gain more yardage and have a higher floor in 2018 than they did in years past.

The best offenses with the smartest coaches are passing more on first-and-10. Not all of them have the best QBs in the NFL. But they appreciate this strategy is the most likely to deliver production than first-and-10 run plays. The faster teams will incorporate intelligent passing on first-and-10, the better off they will be. And this naturally will lead to fewer rushing attempts. There are optimal times to run the ball, and my book lays out when those times are. But they are not on first-and-10. First-and-10 in the first half needs to become more of a passing down.

Check out the 2018 Football Preview book now at Amazon or in PDF to see more ways for teams to improve their efficiency, dive into my outlook for their 2018 season, and to check out the player Evan Silva thinks has the best fantasy outlook in 2018.

“Warren’s preview exemplifies the use of analytics and information in a way that should be interesting to any fan. It is more in-depth than many teams in the NFL are using today. Every GM and coach would serve themselves well to read the analysis of their team. They would both learn something and immediately appreciate the benefit of the information. Some still live in a world where they don’t know what they don’t know. This has become a crowded field, but no one presents it better, and breaks down what it means better than Warren.”

“Warren Sharp’s Football Preview is the only book that will have something for everyone. It has illustrations and graphics for the visual person. It covers the analytical part of the game in many ways different than I have seen. It has trends for people who like to bet the games, as well as philosophical thoughts on things that have happened in the past and how they might affect the future of the game. This book breaks down each team by every category imaginable and describes exactly what they did in every situation. If you coach any level of football, from youth to the NFL, you will assuredly receive valuable information… You won’t want to put it down.”