The Packers Bought Themselves A Pass Rush And It Paid Off

Of all the changes the Green Bay Packers have gone through over the past two seasons, there might not be a more meaningful one than the willingness to spend money in free agency. During the Ted Thompson era, the Packers rarely went out to make a massive splash on the free agent market. They barely even reached the water displacement level of a well-executed Olympic dive.

That changed with the move to general manager Brian Gutekunst. During the offseason, the Packers went shopping for the top tier of free agents with an eye on improving the defense. Green Bay had a focus on improving the pass rush and that goal netted the signings of Za’Darius Smith and Preston Smith. The Packers wanted a quick fix on the edge of the defense and the investment immediately paid off in 2019 as they get set to take on the San Francisco 49ers in the NFC Championship Game.

The Smiths started showing return on investment as early as Week 1 when the two pass rushers consistently tormented Mitchell Trubisky. Za’Darius Smith had seven pressures in the season’s opening game, per Sports Info Solutions, and Preston Smith had another five. Green Bay immediately used the two all around the formation and had some of their best pass rush snaps with both Smiths on the same side of the line.

This wasn’t just a one-game flash, either. The duo was able to make an impact for the entire season. The Packers went from 11th in ESPN’s Pass Rush Win Rate, which measures how often a pass rush wins a block within 2.5 seconds after the snap, to ninth in 2019. Green Bay made a bigger leap in overall pressure rate, which accounts for pressure at any point on the play, by going from 15th in 2018 to third in 2019, per SIS.

The increase in pressure helped and so did the play behind the pressure. On pass attempts opposing quarterbacks got off under pressure, the Packers were significantly better than they were on 2018. Some of that could be attributed to the pressure getting to the quarterbacks faster than it did last season but also has to do with improvements in the secondary. Along with the Smiths, Adrian Amos was brought in as a free agent, Darnell Savage made an impact as a first-round rookie, and the Packers got another year of development from Jaire Alexander.

We know quarterbacks perform worse under pressure and while the actual performance under pressure can’t really be predicted, increasing the rate of pressure is always going to be a good thing for a defense and decreased the margin of error for opposing offenses. The Smiths clearly played a big role in that for 2019.

Za’Darius Smith finished the season third in pressures per SIS charting and Preston Smith finished 18th. While pressures are a volume stat, both Smith finished with more pressures than would be expected given their number of pass snaps when compared to other edge rushers across the league. Below is a chart of 134 linebackers or defensive ends with at least 150 pass rush snaps on the season along with their pressure totals. The Smiths are in green. 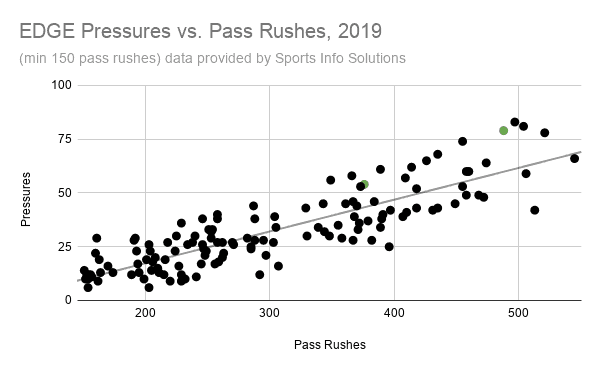 That last point matters because even while there have been studies about the value of pass rushing against pass blocking and pass rushing against coverage with the pass rush losing out in value to both, one thing pointed out is how much one single dominant pass rusher can make a difference. The offensive line is a weak link position where one weakness can break a unit while the pass rush is the opposite where a single strength can change the entire outlook. The Packers, though, have two.

Of the two, Preston had better luck taking the quarterback down early. Per Next Gen Stats, three of Preston’s sacks on the season came under 2.7 seconds, while Za’Darius’s fastest sack was 3.08 seconds after the snap. Preston had a few wins when his alignment and burst off the line gave the opposing tackle no chance.

One of those sacks came against the Denver Broncos in Week 3. The Smiths were line up on the same side of the line with Za’Darius in the interior and Preston out wide. On the rush, Za’Darius initially pushed toward the outside and that kept the right tackle occupied just long enough for Preston to get around him for a strip sack on Joe Flacco, just 2.5 seconds after the snap.

While Preston got in early on some sacks, it was still Za’Darius who was more often through the line the earliest. ESPN also tracks a metric called Sacks Created, which gives a sack to the player who got through the offensive line first and in 2019 Za’Darius led the league with 20.

What also makes Za’Darius’s pass rush success so impressive this season — and an example of how much one dominant pass rusher can make a difference — is how often he was doubled teamed. Per ESPN/Next Gen Stats, Za’Darius was doubled-teamed on 27% of his pass rushes, which was the highest-rate for any edge rusher in the league.

Despite the focus on Za’Darius, he was still able to create pressure and that shift on the line gave Preston more one-on-one opportunities.

The Packers’ defense and pass rush aided this current postseason run, especially considering how little the Green Bay offense actually changed from 2018 to 2019. Per Football Outsiders’ DVOA, the Packers ranked eighth on offense in 2019 after ranking seventh in 2018. On defense, Green Bay ranked 15th in the 2019 regular season after ranking 29th in 2018.

Green Bay’s pass rush has the potential to make a difference in the NFC Championship Game against a San Francisco offensive line that ranked just 26th in Pass Block Win Rate during the regular season. Even in the blowout loss during the regular season, Za’Darius and Preston combined for two sacks while the 49ers were not forced to throw much at all — there were just 21 pass snaps on the day. Green Bay will have to hope there’s a little more opportunity on Sunday.

Without the Smiths, the Packers might not be in the postseason. Now might be the key to making it to the Super Bowl. The Packers took their biggest risk by spending in free agency but the payoff has already been worth it.