The NFL is a passing league. So, it may sound counterintuitive, but I’ve mentioned for several years now that running the ball in the red zone is a way to steal efficiency. That is because most defenses fear the pass in that area of the field. And as Sun Tzu preached in The Art of War:

“Appear at points which the enemy must hasten to defend; march swiftly to places where you are not expected… You can be sure of succeeding in your attacks if you only attack places which are undefended.”

It’s for good reason they fear the pass, because teams are now 55% pass inside the red zone. Over 56% of the time, teams line up in traditional 11 personnel (1 RB, 1 TE, 3 WRs) inside the red zone, and they pass 65% of the time in these situations. However, even in 11 personnel, as we will discuss, running the football results in a double digit increase to success rate.

Running the ball is more efficient in the red zone, whether in short yardage or not. As I wrote in my 2017 Football Preview. In the red zone on 3rd or 4th and short, teams call pass just over 55% of the time, but a run in these situations produces a 12% success rate gain. Additionally, while over half of the pass attempts were unsuccessful, 8% resulted in turnovers or sacks, whereas there were zero turnovers on the run plays.

I’ll present the data on production from various personnel packages to see where the edges lie. Then we’ll dive into a grouping that is primarily used at the goal line, and discuss optimal play calling vs what teams typically do instead.

Yet regardless of the distance, RB runs in the red zone are successful far more often than any passes (to all positions). 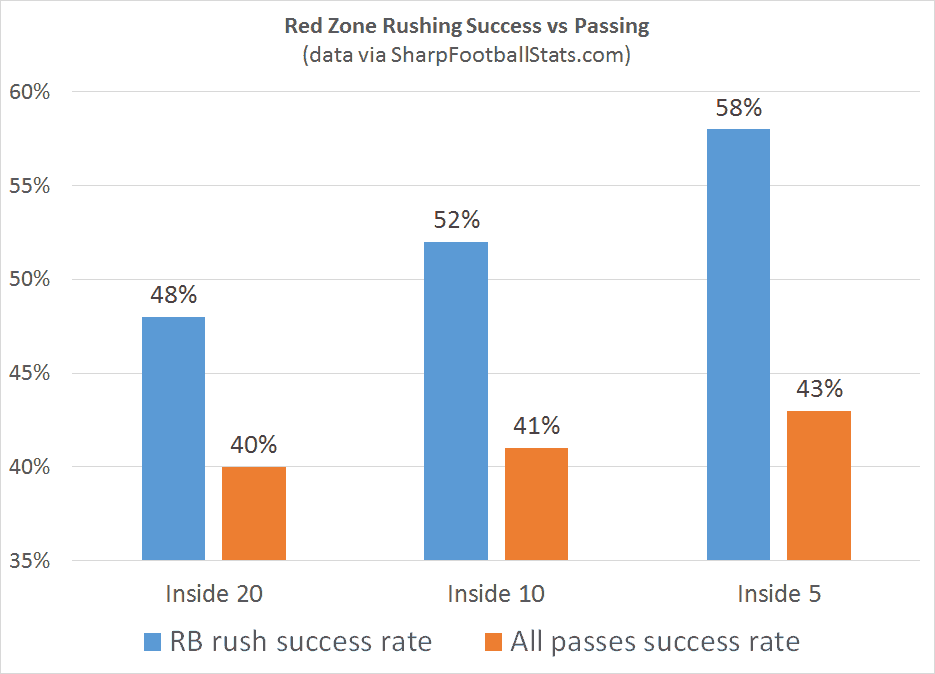 [For the purposes of this analysis, I am removing QB runs, as QBs have an inherent edge to be successful in extreme short-yardage rushing due to their position on the field, as well as their ability to scramble on broken plays.]

This rushing efficiency translates not just to certain formations. For example, don’t think that rushing is more effective because in the red zone and as team’s approach the end zone, they suddenly shift into more compact formations which are far more effective:

The NFL average is 60% 11 personnel over the entire field. On pass plays, that jumps to 69%. And in the red zone, from the 3 yard line out to the 20, teams still use 11 personnel on pass plays 68% of the time, nearly identical to its usage over the field as a whole. The only sudden change is from 1-2 yards out from the end zone, when teams use 11 personnel on just 46% of their attempts (teams pass from a lot more 13 and 22 than over the rest of the field).

And even from these 11 personnel groupings, simply running the football instead of passing it would lead to much more success. Particularly when edging closer to the end zone. It’s not a slight improvement, it’s nearly 20% more successful to run the ball than to pass the ball from 3+ WR formations inside the 5 yard line. 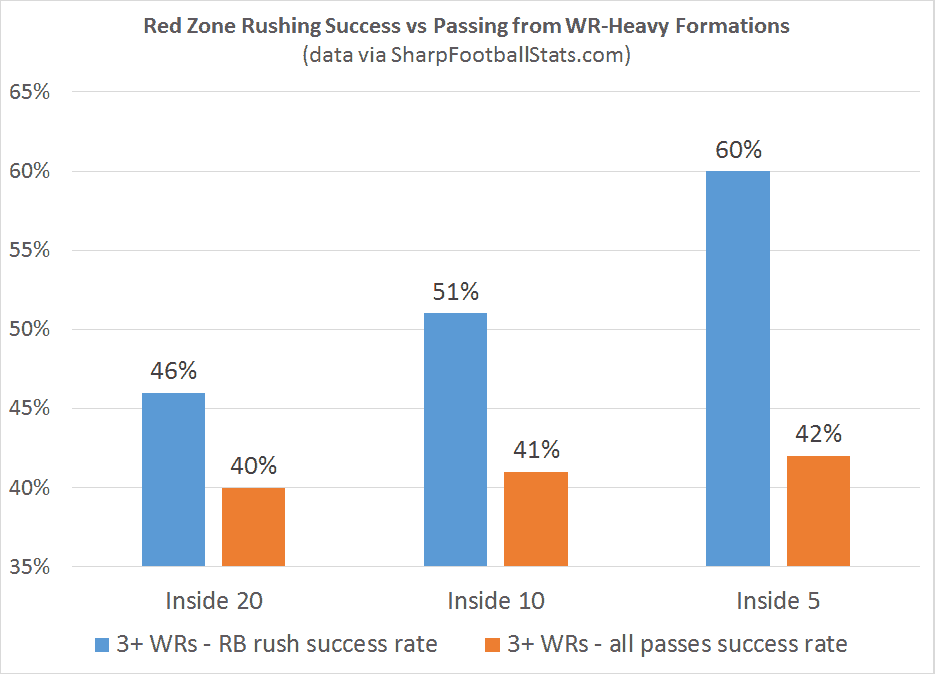 Now allow us to compare rushing vs receiving from a variety of personnel groupings inside the red zone. As we can see, the efficiency edge for rushing the ball in this area of the field is not solely limited to 11 personnel. Play success in general increases as the ball gets closer to the end zone, because fewer yards are needed to qualify for a play to be successful. For instance: On the 20, on first and 10 the play needs to generate at least 4 yards to qualify as successful. On first and goal from the 5, that play needs to generate only 2 yards to qualify as successful.

As the next graphic shows, indeed rushing is more efficient regardless of the formation. A key takeaway from this graphic is the counterintuitive nature of wide receivers for passing in this area of the field. All passes are more successful from the red zone with fewer wide receivers on the field.

As I just mentioned, teams tend to stay in 11 personnel (3+ WRs) from the 20 up to the 3 yard line just as frequently as they do over the rest of the field. But the reality is that such formations tend to be mistakes. Passing out of 1 WR formations typically means 22 or 13 personnel. Inside the 10, for example, these passes have a 49% success rate. But targets to the TE from these formations have a massive 60% success rate, which is even stronger than rushing the ball in this scenario. [Perhaps in a future article I’ll discuss optimal positional targets in the red zone, based on personnel groupings.] 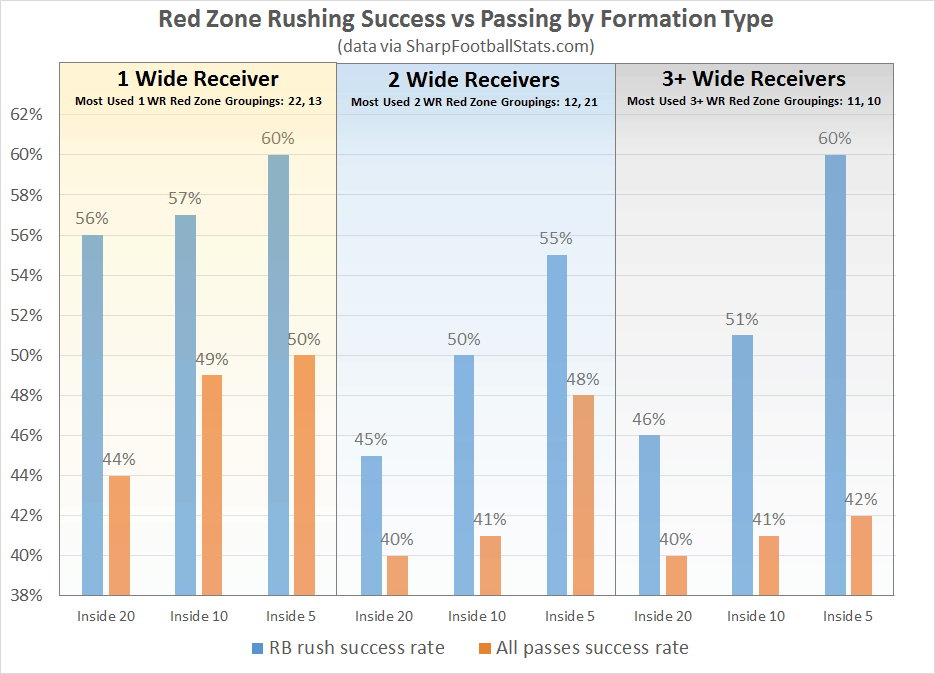 The NFL is all about deception.  It’s about creating edges and attacking weak points.  Just because passing is more efficient than rushing over most of the field, that does not mean it continues to be so inside the red zone.  Rushing out of any formation is more efficient than passing, but balance is key.  Aligning in a formation which allows a team to pass or run, and will enable them to stay on schedule is a big edge.  That way, a team won’t find itself in 3rd and long or medium inside the red zone, leaving their only play call a pass to record a first down and avoid a costly field goal attempt.

If deciding to pass, particularly near the end zone, personnel groupings with fewer WRs and more TEs deliver substantially more efficient results.  And this makes perfect sense.  A team’s #3 DB against a #3 WR has less ground to cover and the #3 WR is less likely to get open quickly, which is how most passes in confined spaces need to be delivered.  However, a team’s #2 TE working his body positioning against a LB who doesn’t typically cover TEs often, let alone in confined spaces, is a massive edge.

Some teams will load up in “jumbo” personnel, featuring no WRs, and use 3 TEs, a FB and a RB to try to gain short yardage near the goal line. How successful is this?

First let’s back up and discuss full-field jumbo packages. RB runs out of jumbo on 3rd or 4th down and 1 are successful 43% of the time. Compare that to RB runs with at least one wide receiver on the field in those same situations, which are successful 69% of the time, and you can see why it’s not particularly smart to trot on your jumbo personnel. Particularly because it gives zero threat to pass on 3rd or 4th down. [removing goal line plunge jumbo entirely, the RB success rates are 14% better in non-jumbo as opposed to 26% better from the 1 yard line, but this could be due to lower sample size producing higher variance.] Even the Patriots, who are one of the most efficient teams in the NFL, were 30% more successful (80%) when running their RB with at least one WR on the field on 3rd/4th down and 1 than they were when running their BR from jumbo formation.

Add 1 wide receiver to give more of a threat to pass, and RB runs posted a 45% success rate (up from 38% without a WR). While teams primarily still ran the ball (79% run), passes became much more successful at 57% (up from 0% without a WR).

Add another wide receiver to place two on the field, and suddenly we’re at peak efficiency. RB runs posted a 73% success rate. And while teams were still run heavy (71% run), passes were 100% successful, with each pass recording a TD.

When teams added at least one more wide receiver, to play 3+ WRs on the 1 on 3rd or 4th down, the strategy switched to passing the ball, but that was a mistake. Teams ran on only 40% of attempts, much less than the 71% with 2 WRs or 79% with 1 WR. But these runs were much more successful than the passes: 60% of the RB runs were successful, while only 40% of all passes were successful. 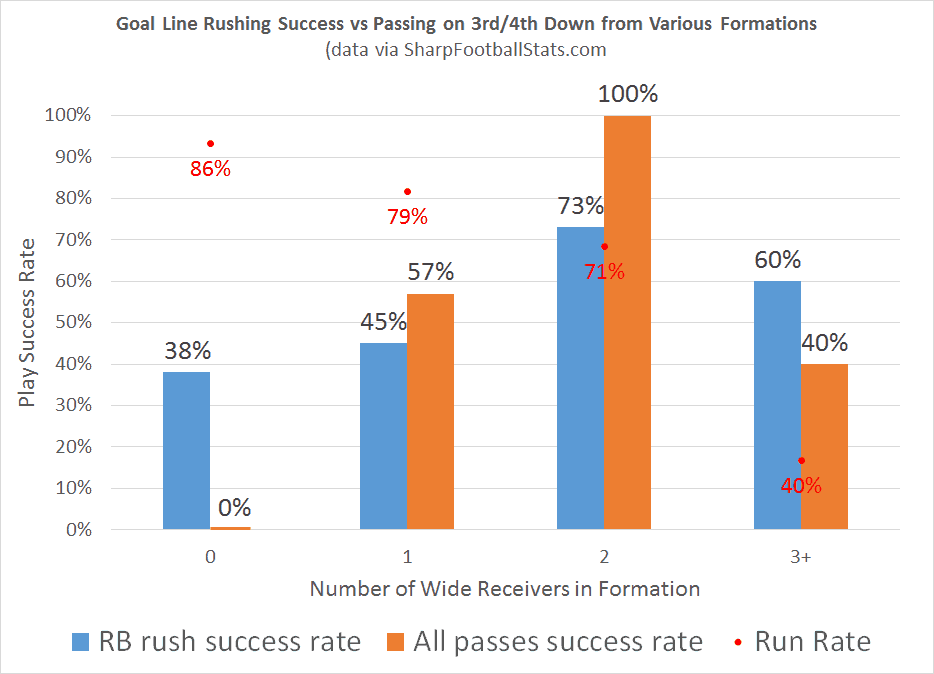 What has this shown us regarding jumbo formations?

1) Jumbo formations are terrible in these situations. Stop coaches from using them, and feel free to shudder any time you see one trot onto the field on 3rd/4th down from the 1 yard line.
2) The optimal play from the one yard-line on 3rd or 4th down is a run play, but the formation is more key than the actual play call.
3) The optimal formation is 2 wide receivers, using either 12 or 21 personnel. RB-runs out of these formations are the best of any grouping, delivering a 73% success rate. In part this formation is successful because it delivers enough illusion for a pass. However, passes are also extremely successful from 12 or 21 personnel.
4) If a team wants to pass the ball, they should not add more wide receivers in hopes of playing “find the open man” thanks to more options. Passing out of 3+ WRs is a terrible strategy in this situation. However, rushing with a RB is successful 60% of the time, an extremely palatable rate.