Why the Rams Lost the Super Bowl

I am not a Rams fan. I am a fan of efficiency. I left my job as a Professional Engineer to study NFL analytics. Last year I began consulting for an NFL team. And since that team didn’t play in the Super Bowl this year, I used my models and analysis to break down the Super Bowl and forecast how best the Rams or Patriots could win the game.

I wrote a 40-page report on the subject which I distributed to media a week before the game. The Patriots offense was fortunate. They didn’t need to alter much to beat the Rams. They would have success running from 21 personnel (2 RBs, 1 TE, 2 WRs) and if they won the matchup in the slot (Julian Edelman vs Nickell Robey-Coleman, the most critical one-on-one matchup of the entire game per my analysis) they should be able to do enough offensively to win.

But I soon realized the Rams offense was not going to be competitive unless they tweaked and modified things. They would not be able to “do what we do” and beat the Patriots. They NEEDED to adapt their offense to be able to defeat the Patriots.

I isolated several key elements for the Rams. They were “Ideas to Maximize Efficiency”. I watched the Super Bowl to see if the Rams utilized any of these ideas. They scored 3 points and after obtaining the film and charting data, I analyzed the results.

I wrote the following Twitter thread after the Super Bowl based on my review of the film and data (click below to read the thread): 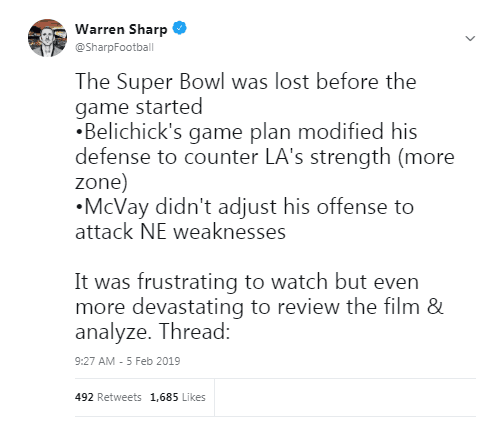 Because I was asked to put this into article form, I’m going to walk through these the ideas I isolated pre-game which would help the Rams increase their offensive efficiency based on what we knew of the Patriots defense. And then I’ll look at whether they did or did not utilize any of these ideas and the results.

1. The Rams must pass the ball more from 12 personnel than their season average

The splits aren’t close. But they were predictable, considering the Rams were better out of 12 than 11 and the Patriots were the #3 defense vs 11 personnel passes but were #26 vs 12 personnel passes.

One benefit to using 12 personnel is added pass blockers. While Gerald Everett is far from a true pass blocker, he can occupy or double long enough to create an advantageous downfield matchup.

The Rams 5-man offensive line was routinely whipped by the Patriots defensive line, which typically rushed only 4 men and still recorded pressures or sacks. Instead of shifting out of 11 personnel to add an extra TE, the Rams continued using it.

The Rams used 12 personnel with both TEs blocking only 3 times the entire game. The first time they used it was with 3:42 left in the 3rd quarter. To rephrase – the Rams went over 2.5 quarters before using 2 TEs to help block the frenetic Patriots pass rush.

The result of that pass? It was the closest the Rams got to a touchdown all game, and should have been a touchdown but for a delayed release (he had so much time) by Goff:

The Rams 3 passes from 12 personnel where both TEs stayed in to block:

Only 3 plays. All 3 generated open targets downfield which should have averaged 18 YPA and recorded a TD, but for the late Jared Goff pass.

The Rams seemingly didn’t care that the Patriots were significantly better defending 11 personnel. They apparently tried to win by “doing what we do” and out-executing the Patriots.

The Patriots, on the other hand, modified their entire defensive strategy just for this game to capitalize on the Rams weaknesses. I was asked on the radio yesterday if I though that was bold and dangerous. I said “it was bold and intelligent” and I stand by that. So do the Patriots, who said after the game: 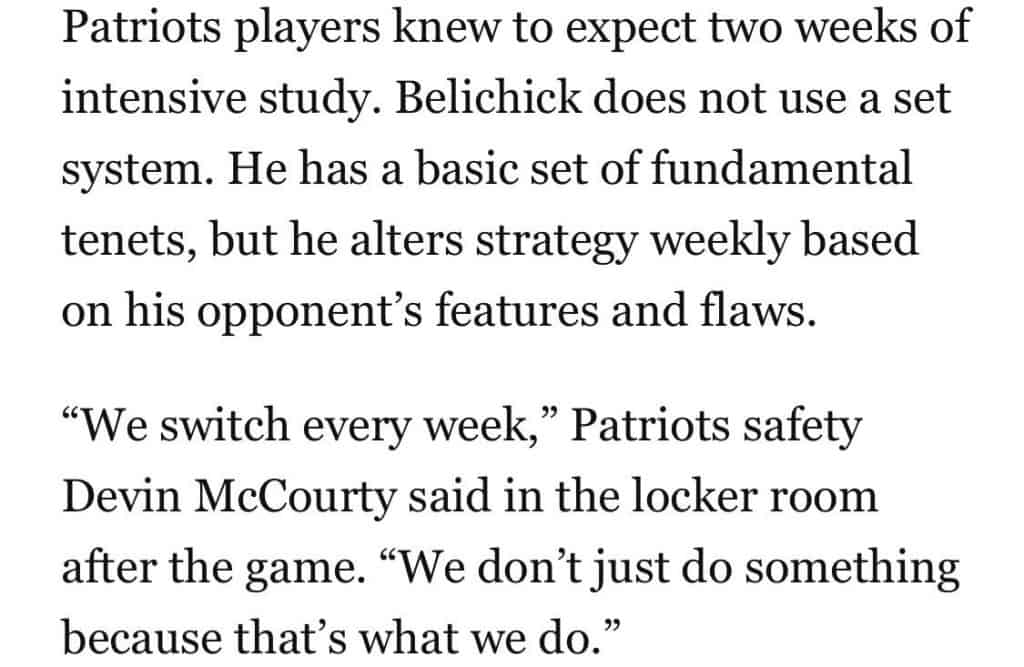 The flaw in failing to attack through the air more from 12 personnel likely cost the Rams the game.

2. The Rams must use play action often to slow the Patriots pass rush 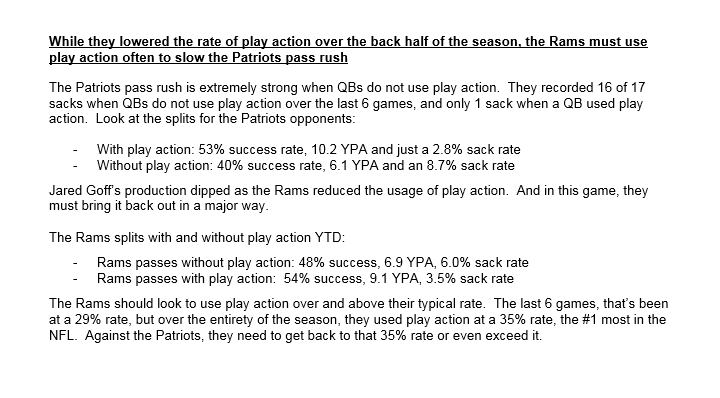 On the season, the Rams used play action on 35% of dropbacks. As mentioned above, I wanted the Rams to increase that rate in the Super Bowl.

The play action splits from 11 personnel?

Looking only at early downs, from both 11 and 12 personnel, here were the play action splits:

I’ve heard the Patriots “took away play action”… that would mean using play action in the 2nd half didn’t work any more. But actually, 2nd half only, all downs:

3. The Rams must find a way to get productivity from the RB-pass game

The Rams didn’t have a single target to a non-WR in the first half.

The Rams threw 3 early-down targets to C.J. Anderson, but the first was not until 4:30 left in the 3rd qtr.

4. The Rams must run the ball more from 11 personnel, and focus on run types that mirror the Patriots weaknesses, which include outside zone (specifically from 11 personnel) and inside zone 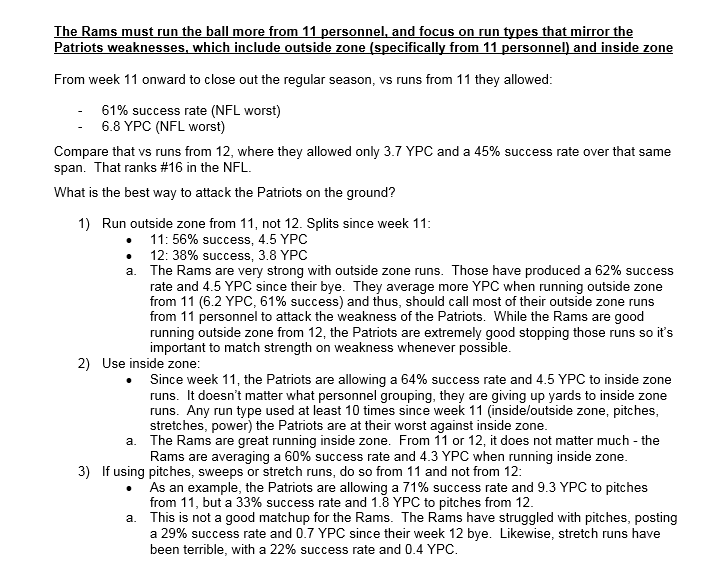 In biggest game of the year, despite the need to run from 11, the Rams ran from 12 at their 2nd highest rate in any game this year.

The Rams gained more YPC and produced a higher success rate running if from 11 personnel in the Super Bowl, but ran too often from 12 personnel.

How about the run types? Here’s a breakdown of the Rams run types by personnel in the Super Bowl: 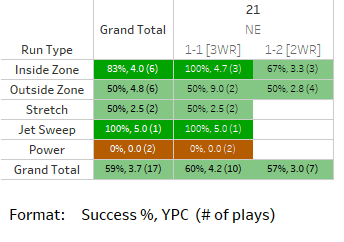 I believed pace would be a huge element to this game. The Patriots did not face very many fast-paced offenses in 2018, and the Rams were the #1 fastest paced offense.

I didn’t have any specific recommendations, but was eager to see if the Rams would utilize their pace to gain an edge for their offense. Especially since it was nearly impossible to utilize it in the hostile crowd environment in the dome in New Orleans in the NFC Championship game.

The Rams ran 18 plays where they snapped the ball inside of 5 seconds on the play clock.

These plays generated a paltry 1.4 yards/play (plus an INT).

The Rams ran 5 plays where they snapped the ball with 1 second on the play clock.

Snapping this late in the play clock played right into the Patriots hands.

Here is a look at every play the Rams ran (aside from plays after timeouts or change of possession, as well as the final drive of the game down 10 points) sorted by seconds left on the play clock at the snap: 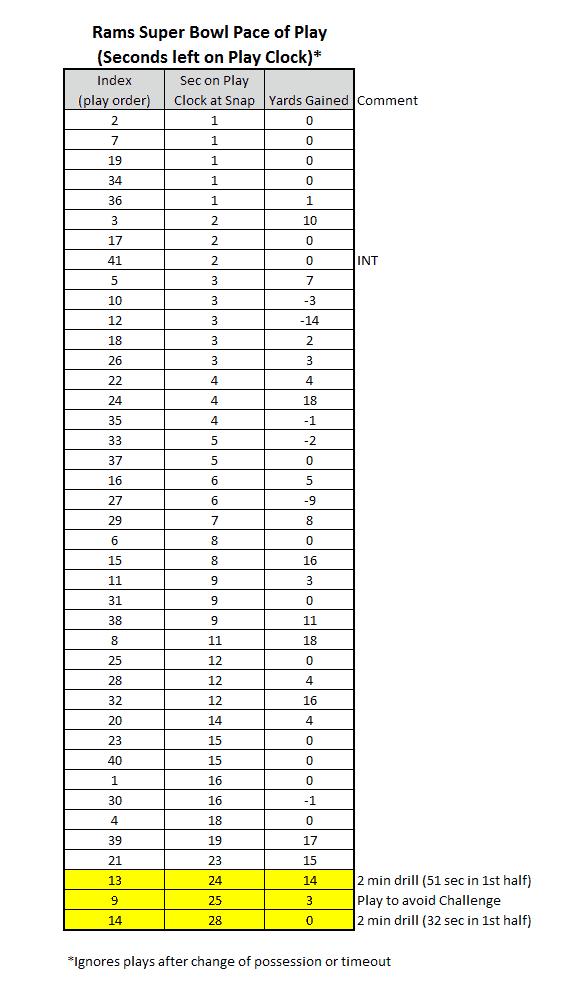 Aside from the two plays with less than 1 minute left in the first half and the hurry-up pass to Brandin Cooks to (smartly) prevent the Patriots from challenging a completed pass call, the Rams got off just 3 snaps (of 38) with more than 16 seconds left on the play clock.

Running the play clock down clearly was not effective nor useful. Yet the Rams made minimal adjustments at halftime:

Their first 5 snaps out of the locker room saw them snap the ball with less than 10 seconds on the play clock every time (3 were with 3 seconds or less).

And of their final 9 snaps before the final drive, 7 of the 9 saw the Rams snap the ball with less than 10 seconds on the play clock, including 6 of 9 with 5 seconds or less.

The Patriots defense was tremendous. They executed a tremendous game plan. One that adapted and even offset the loss of S Patrick Chung in the 3rd quarter.

But there was a major opportunity missed by the Rams in creating their gameplan & adapting in-game.

Before the game, one could identify what the Rams needed to do based on the Patriots strengths and weaknesses coupled with an understanding of who the Rams are:

All of these attack weaknesses of the Patriots but also are not so foreign to the Rams that suggesting they implement them into the game plan would be impossible. Far from it. The Rams already do these things. The strategy should have been to emphasize them more in this particular matchup.

The Patriots were willing to scrap everything that brought them success (man to man defense) and use something new (zone) in the biggest game of the year, primarily because they thought it game them a tactical edge.

What are you willing to risk to win the Super Bowl?

Because those elements worked in the Super Bowl.

But all of these were severely underutilized.

(The only thing that didn’t work was early down RB-passes, but the sample size to Gurley and Kelly was 1 total target, so that wasn’t even explored enough to know if it would have worked)

The takeaway is that even a great, Super Bowl caliber offense must must adapt to attack their opponent flaws. The takeaway heading into the 2019 season must be that while offense wins games, offenses cannot simply run the same plays and the same schemes and expect the same results over the course of the season. Offenses, even great ones, must constantly (every single week) study with great detail the edges they have over the defense they are facing and adapt. Their game plan entering the game must adapt and often times, adaptation must come in-game to circumstances they are facing.

The Rams didn’t have a creative enough game plan and were too tied to what worked for them most of the season. They weren’t willing to get too far from their comfort zone. The Patriots have no comfort zone and change anything if it is required to win a game.

I’m reminded of several quotes I used in my 2018 Football Preview book.

About being bold with your strategy to surprise your opponent:

Everything which the enemy least expects will succeed the best. – Fredrick the Great, 1712-86

Or about adapting your offense when strategies aren’t working:

Whenever you and your opponent become stagnant, you must immediately employ a different method of dealing with him in order to over come him. – The book of Five Rings, Miyamoto Musashi, 1584-1645

And finally, what Bill Belichick appears to have captured and used for success:

When Napoleon was asked what principles of war he followed, he replied that he followed none. His genius was his ability to respond to circumstances, to make the most of what he was given – he was the supreme opportunist. – The 33 Strategies of War, Robert Greene, 2007

The Rams will learn from this. You can blame the result partially on the loss of Cooper Kupp or an errant Jared Goff throw or simply the genius of Bill Belichick. All of those play roles. I prefer to accept the reality that with a different game plan or faster in-game adjustments, the Rams could have won this game even with the hand they were dealt.

I look forward to the time when all NFL teams become more willing and more open to adapting offensive strategies (even for Super Bowl caliber offenses) weekly to strike aggressively at opponent weaknesses based on pre-game study as well as making in-game adjustments in order to achieve the fastest path to victory.