As we are pushing into July and further downhill toward the 2022 fantasy season, we are going to extend our top-down approach that started with a look at the state of leaguewide production and usage at each skill position for fantasy by looking at team performance and output.

Last week, we dove into scoring and touchdown output per drive and the distribution of team touchdowns to highlight some potential regression candidates.

Today, we are going to dig into how good teams were at converting yardage gained into reaching the end zone.

While you may be wondering why you should care so much at converting yardage gained into touchdowns, you can see the clear correlation between the two.

Of course, we aren’t reinventing the wheel suggesting that if you gain a lot of yardage then you are going to have more scoring opportunities on offense, but over the entirety of the sample above, yardage gained on offense carries a .7146 r-squared correlation to offensive touchdowns scored. In other words, roughly 71% of all offensive touchdowns scored since 2010 can be explained by yardage gained.

Earlier this summer, we talked about how the 2021 season was due for regression following a 2020 campaign played under unique conditions. That shows up again here as teams dipped a touch in yardage gained needed to reach the end zone compared to 2020, but things were still hyper-efficient on that front as it was the best season in the sample outside of 2020.

NFL teams scored a touchdown on average once every 139.0 yards gained. From a direct correlation stance, the 2021 season also produced the tightest correlation to touchdowns scored that season since 2014.

Moving to the team-by-team section so we can start pulling some specific notes, in the sample above 72.6% of the teams that scored fewer touchdowns than their expected total based on yardage gained per league rates came back the following season and scored more offensive touchdowns.

On average, those teams scored 10.1 more touchdowns the next season.

If looking for offenses that make that largest leaps in a given season, they of course almost come from the bottom of the barrel.

Of the 72 teams since 2010 to improve their touchdown total by double-digits or more the following season, 56 (77.8%) were teams that were below touchdown expectation the year prior.

On the other side of the coin, 70.9% of the teams that out-produced their expected touchdown total based on yardage gained scored fewer touchdowns the following season, with an average loss of 10 touchdowns per season among those teams.

Looking at 2021 in relation to those bulk numbers, remember that we had an extra game on the schedule compared to previous seasons.

Despite that, of the 14 teams that outkicked their expected touchdown production based on yardage gained in 2020, just two (Tampa Bay and Arizona) scored more touchdowns last season while the other 12 teams scored 10 fewer touchdowns per team while half of those teams scored 11 or fewer times last year.

11 of the 18 teams (61%) that were below touchdown expectations in 2020 scored more touchdowns in 2021. That was below the top-down rates of improvement, and even more disappointing with the added context that teams played an extra game last season.

The Texans (14 fewer touchdowns than in 2020) were the only team below touchdown expectation from the year prior to score over 10 fewer touchdowns last season. The Falcons (-9), Jaguars (-9), and Bears (-8) were not far off. 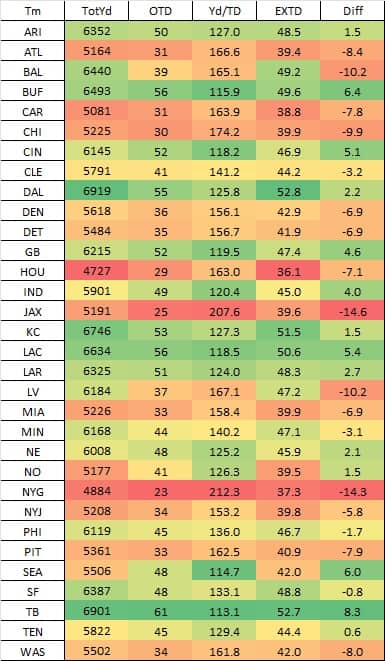 Just four other teams (Bills, Seahawks, Chargers, and Bengals) were at five or more scores over expectation after we had nine of those teams a year ago.

We have seen 78.4% of the teams in that arbitrary bucket come back and score fewer touchdowns the following season, above our base rate in totality. Among the nine teams mentioned in this bucket a year ago, only the Buccaneers came back and scored more touchdowns while the other teams lost an average of 11 touchdowns off their 2020 output, despite the extra game.

For added context, not all regression is a boogeyman to run and hide from as the Packers scored 12 fewer touchdowns than they did in 2020 and still were a top-10 offense in trips to the end zone.

Even if we are placing sound bets on Tampa Bay, Buffalo, Los Angeles, and Cincinnati to score fewer touchdowns in 2022, they all are coveted offenses we anticipate to compete with being among the best of the upcoming season.

Seattle is obviously different. Not only due to the trade of Russell Wilson, but even with Wilson a year ago, Seattle was second in the NFL in yardage produced per touchdown (114.7 yards) as they were 20th in expected touchdowns scored but tied for 11th in actual touchdowns scored.

In the heart of darkness, we had four teams (Ravens, Raiders, Giants, and Jaguars) score double-digit touchdowns below yardage expectation.

Since 2010, there were just 14 other teams to score fewer implied touchdowns per yardage by double digits. 12 of them came back to score more touchdowns the following season with an average increase of 14 touchdowns.

The Raiders were 11th in expected touchdowns, yet 20th in actual touchdowns. We covered their inability to produce touchdowns over kicking field goals last week, something they hope to remedy with the addition of Davante Adams.

While it is easy to take a bull stance on the Ravens and Raiders improving, the Giants and Jaguars take more of a step in blind faith based on the top-down regression numbers. Those teams also ranked 31st and 32nd in expected touchdowns, to begin with.

That’s especially the case for the Giants, who were in this same exact bucket a year ago, becoming just the third since 2010 to have back-to-back seasons with 10 or more touchdowns below yardage expectations.

That said, both teams have revamped their regimes and are good bets for improvement in 2022 with the bar being set so low.

There were another 10 teams (Jets, Lions, Broncos, Dolphins, Texans, Panthers, Steelers, Commanders, Falcons, and Bears) that scored five or more touchdowns below expectation in 2021.

In our sample since 2010, 78.2% of teams that fall into that bucket have come back and scored more offensive touchdowns the following season with an average increase of 12.5 touchdowns scored among those teams.

While there is a smattering of offenses here we anticipate to be lackluster again in 2022, we are working with a strong hit rate on 7-8 of these teams being markedly improved over their floor output in 2021, even if they do not become an elite touchdown scoring team in the context of the 2022 campaign.

A lot of that 2021 scoring ineptitude is priced into players on these offenses outside of the excitement surrounding the Broncos adding Russell Wilson, providing an opportunity for players on those teams to have a higher ceiling than what is currently reflected in their cost.