What Are The Las Vegas Raiders’ Team Needs In The 2022 NFL Draft?

The 2022 NFL Draft starts on Thursday, April 28. As a lead-up to the draft, we’ll be giving a team-by-team breakdown for positional needs. For each team, we’ll give an overview of the current depth chart and how big of a need each position is in the upcoming draft. You can find the rest of the team needs (as they’re updated) and the rest of our draft content in the 2022 NFL Draft hub.

What Picks do the Las Vegas Raiders have in 2022

The Las Vegas Raiders have the fifth hardest NFL strength of schedule for the 2022 NFL season. 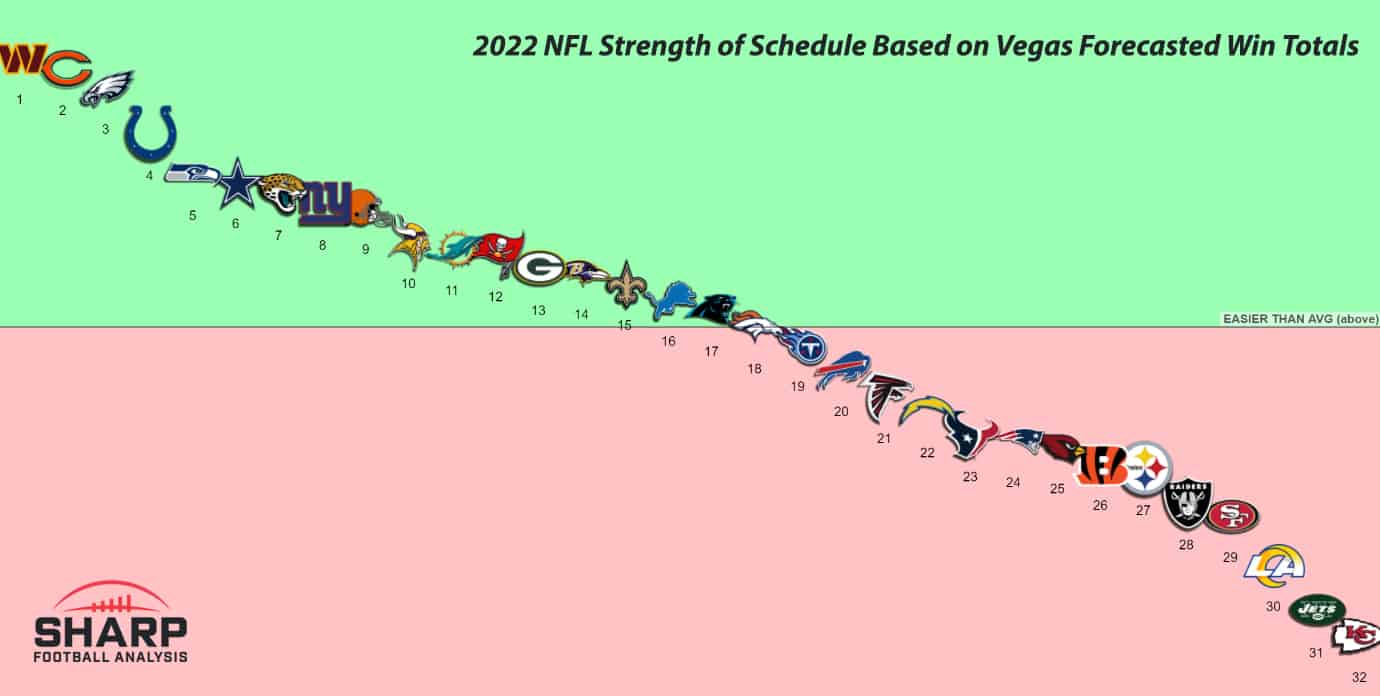 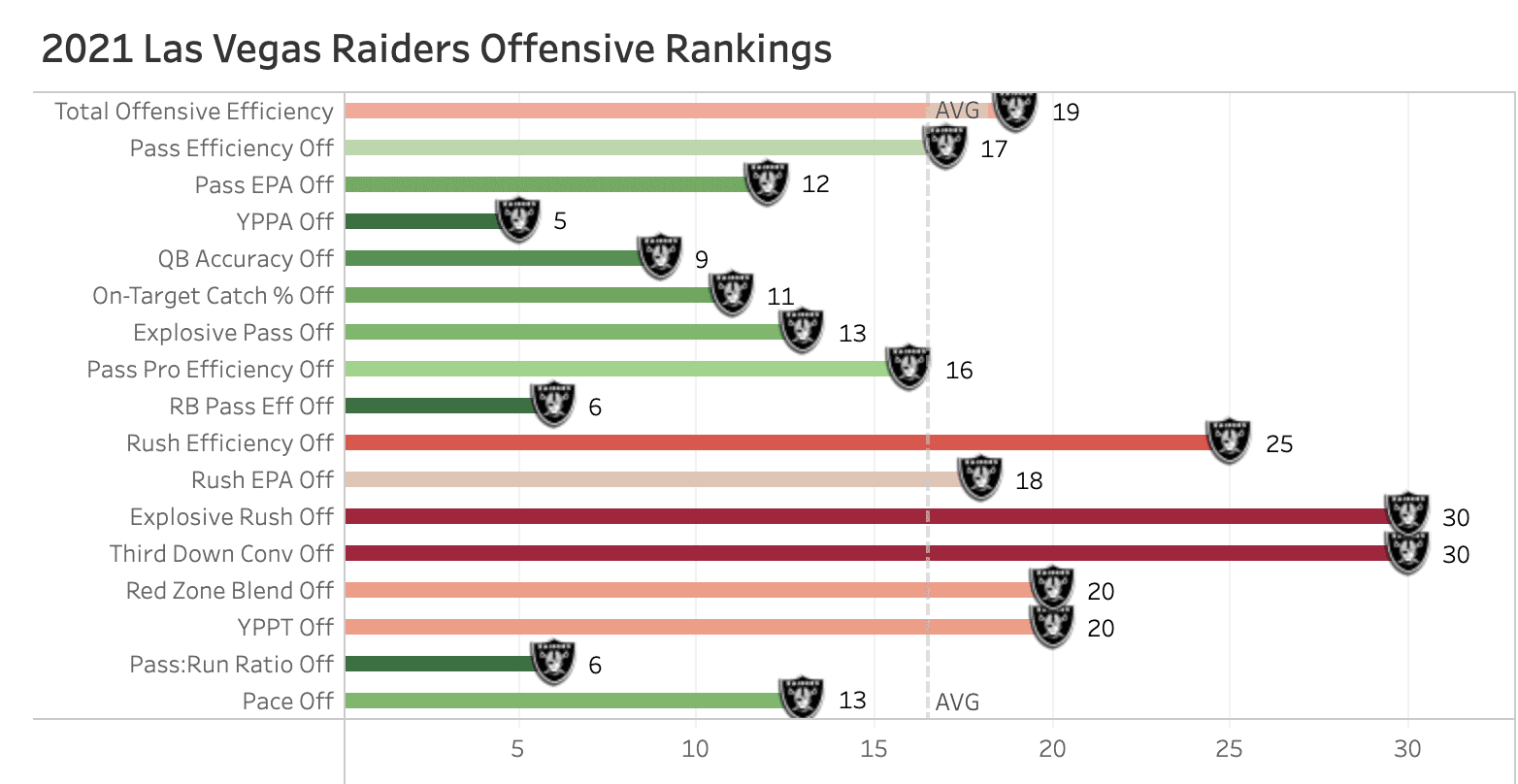 The Raiders just inked Carr to a three-year extension through the 2025 season. While that deal is worth up to $121.5 million, there are plenty of team-friendly elements baked in as Carr is guaranteed as little as $24.9 million, but then goes up to $65 million if the Raiders do not release him three days after next year’s Super Bowl.

Regardless of how that plays out at the start of next offseason, the Raiders should not be in the market for adding a rookie passer to the fold here.

With 1,220 yards and nine touchdowns this past season, Josh Jacobs has gone over 1,200 yards and seven touchdowns in each of his first three seasons.

Jacobs is entering the final season of his rookie contract, but the Raiders have the ability to pick up his fifth-year option at $8.0 million for 2023, something that is probable before the May 3rd deadline.

With Josh McDaniels coming over from a New England organization that has compartmentalized their backfields regularly, we should expect the depth here to be used more than a year ago in unison with Jacobs as the front man. The team has a viable veteran in Kenyan Drake, while adding both Brandon Bolden and Ameer Abdullah on one-year contracts.

With the reduced draft capital at their disposal, the Raiders should not use any of it at the running back position.

The Raiders have that reduced draft capital due to making a splash in trading for Davante Adams.

Adams will turn 30 years old this December, coming off another stellar campaign that saw him catch 123 passes for 1,553 yards and 11 touchdowns. Adams was third among all wide receivers in yards per route run (3.12), was third at the position in targets per route run (30.1%), and second in points added per route (.086) per Sports Info Solutions.

Hunter Renfrow is coming off the best season of his early career, catching 103 passes for 1,038 yards and nine touchdowns.

Renfrow’s opportunity was maximized by Darren Waller missing six games, the midseason loss of Henry Ruggs, and the failure of Bryan Edwards to make a second-year leap. In the seven games that Waller missed or exited early, Renfrow averaged 7.1 catches for 79.9 yards per game as opposed to 5.5 catches for 48.8 yards per game otherwise. In the 11 games that Waller played in full, Renfrow reached 60 yards just twice.

Renfrow is entering the final season of his rookie contract but is a supremely solid fit for McDaniel’s offense.

Behind Adams and Renfrow, the depth is certainly suspect.

2020 third-rounder Bryan Edwards managed just 34-571-3 in his second season. Drawing just 59 targets, Edwards was outplayed by Zay Jones down the stretch of 2021 in a season where opportunity was available due to injuries and the release of Ruggs.

The team has added Mack Hollins and Demarcus Robinson on one-year contracts for short-term depth, but Edwards is the only wideout here outside of Adams signed beyond this upcoming season.

With Edwards yet to flourish and Renfrow entering the final season of his contract, the Raiders still can add to this room with a day three wideout.

Waller will turn 30 in September, but he still was targeted on 23.5% of his routes (fifth at tight end) and averaged 8.5 targets per game (second). With cap hits of just $6.8 million and $7 million over the remainder of his deal, Waller is still a tremendous value.

Waller is the only tight end on the roster signed past 2022, but with reliable options behind him in Foster Moreau and Jacob Hollister for this season, the Raiders do not need to be aggressive in adding contractual depth through the draft given their limited number of picks.

The Raiders have a strong set of skill players offensively, but this part of the offense is easily their weakest link.

So far as things are shaping up this offseason, the Raiders are largely running the same line back for 2022.

Kolton Miller is the only above average starter currently on the line. Miller was the fifth-highest graded tackle per Pro Football Focus in 2021, allowing a 4.7% pressure rate (29th among 95 tackles with 100 or more pass blocking snaps), while allowing four sacks.

2021 first-round draft pick Alex Leatherwood was on the field for 97% of the snaps at least, but his rookie time on the field was spent as a struggle. Leatherwood logged 924 snaps at right guard after starting the first four games at right tackle. Leatherwood allowed a 9.3% pressure rate, ranking 178th among 189 guards and tackles to play 100 or more snaps in pass protection. Credited with eight sacks allowed, that ranked tied for 176th among the same group.

We have seen rookie linemen struggle before and Leatherwood will be given runway to improve.

The Raiders will get Denzelle Good back this season after he suffered an ACL injury in Week 1 a year ago while signing Alex Bars, who started 11 games over the past two seasons with the Bears.

While they are not flush with high-end draft picks, competition and talent on the line is the biggest need for this offense.

Jonathan Hankins played 49% of the defensive snaps last season in his third year with the Raiders. The 340-pound tackle has been a presence inside and played a part in the Raiders being a borderline top-10 run defense (11th in EPA per play). Hankins re-signed for a one-year deal this offseason.

Bilal Nichols comes over from Chicago as more of a pass rusher inside. That was the role of Quinton Jefferson last season, but he left in free agency. Nicols was 32nd among defensive tackles in pressure rate last season, per SIS.

Vernon Butler was another free agent signing, who spent the past two years in Buffalo. The former first-round pick provides solid rotational depth.

Maxx Crosby has developed into one of the league’s best pass rushers. He was 12th among edge rushers in pressure rate and 10 in ESPN’s Pass Rush Win Rate. Crosby only had eight sacks but he more than doubled his previous two seasons with 30 quarterback hits.

Chander Jones will now be opposite of Crosby. Jones was 36th among edge rushers in pressure rate and matched a career-high with 26 quarterback hits.

Former fourth overall pick Clelin Ferrell played just 22% of the defensive snaps while appearing in 16 games. Ferrell may get more run as the No. 3 with Carl Nassib gone. Still, there hasn’t been much to rely on when he has been on the field.

The Raiders, despite having a lot of money tied up in the position, really struggled to find productive linebackers — especially in coverage. Jayon Brown was signed after five years with the Titans. He ranked 19th among 85 qualified linebackers in yards allowed per coverage snap.

Denzel Perryman played 75% of the Raiders’ defensive snaps but ranked 79th in yards allowed per coverage snap. However, Perryman was able to play downhill with 102 solo tackles and 154 combined tackles. His 1.8-yard average depth of tackle was the fifth-best among 39 linebackers with at least 50 tackles.

Divine Deablo had some flashes late in the season as a safety converted to linebacker. His versatility there opens up some possibilities when he’s on the field.

Trayvon Mullen only played in five games in 2021 after flashes during his first two seasons. Mullen will be back on the outside in Year 4, his final year of his rookie contract as a 2019 second-round pick.

Rock Ya-Sin was part of the return in the Yannick Ngakoue trade. He slowly developed with the Colts and ranked 23rd among cornerbacks in Adjusted Yards allowed per coverage snap in 2021.

Nate Hobbs quickly jumped in as one of the league’s better slot corners during his rookie year as a fifth-round pick. Hobbs was eighth among corners in Adjusted Yards allowed per coverage snap.

Anthony Averett provides solid depth behind the top three. He was an average corner with the Ravens last season after he was forced into more action due to all of the injuries in Baltimore’s secondary.

Trevon Moehrig played 99% of the Raiders’ defensive snaps as a second-round rookie. Moehrig played the deep safety on a defense that used a single-high pre-snap shell (65%) and single-high coverages (66%) at the highest rates in the league.

It should be noted with the New York Giants, Patrick Graham ran single high at some of the lowest rates in the league (32% pre-snap, 41% in coverage).

Jonathan Abram has been an aggressive downhill player and not much else. He played 82% of the snaps last season, almost out of necessity, and because he was healthy. 2022 will also be the final year of his contract with the fifth-year option likely to be declined.

Duron Harmon comes over with experience in a Patrick Graham-like scheme with years in New England and Detroit.