As excited as I am to see Patrick Mahomes, I remain concerned about a potential increase in interceptions and difficulty for the defense that would inevitably follow. Reid has a tough task to take on a freakishly gifted quarterback who believes he can make every throw and still keep Mahomes’ interception rate low.

That paragraph is how I concluded the chapter on the Kansas City Chiefs in my 2018 Football Preview.

Yesterday, on August 1st, we saw the following come out of training camp. After throwing an interception in camp, his 3rd of the day:

It was a learning moment for Mahomes and a mistake he might not make again. But it’s not the only mistake he has made in camp. He threw two other interceptions Wednesday and has seven in six camp practices. Six of the picks have come during the three practice sessions in pads, when play is most competitive.

I’m not terribly concerned with camp interceptions, though they aren’t ideal. But it’s something that needs addressed and rectified as soon as possible.

Since Andy Reid took over as head coach in 2013, the Chiefs have won the turnover battle in 46 games. It’s the best mark in the NFL. It’s been their ticket to winning games. The next-best team during that span is five games worse (41, Seahawks).

If you look at the Chiefs metrics from the last two years, you would be shocked they went 22-10 (69%). Here is a look at their offensive and defensive metrics in each season: 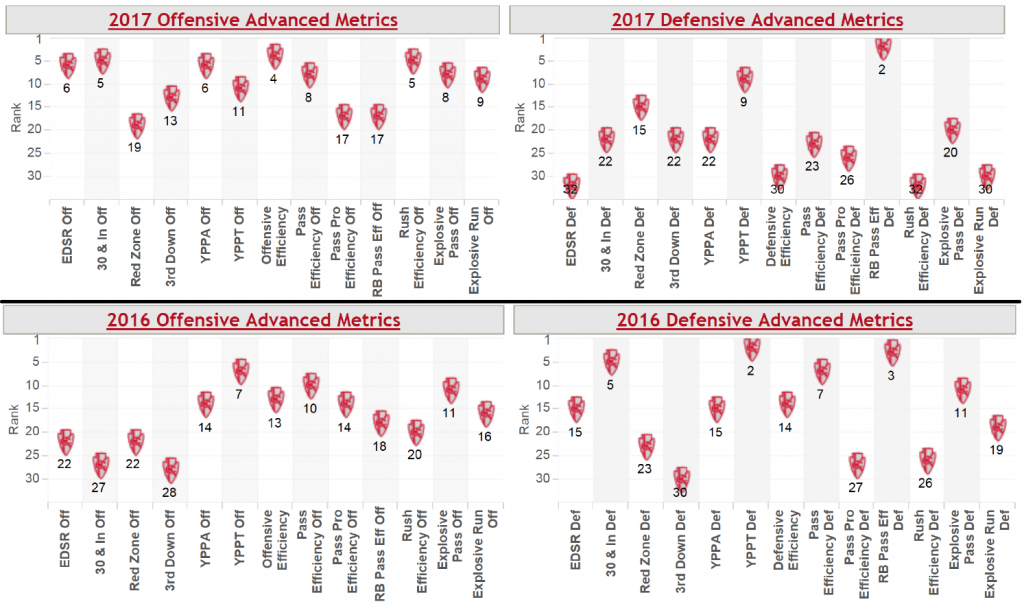 These are the metrics of an average team. A below average defense and an above average offense. But by no means a 69% team. But they won the turnover battle in 18 games, and that was the major reason they won 22 games total.

What was the #1 reason they won the turnover battle in so many of these games?

Quarterback play has immense impact on turnovers. And from that standpoint, Alex Smith has been among the NFL’s best. Before arriving in K.C., Smith threw ten or more interceptions in 3-of-6 seasons as a starter, despite starting 16 games only twice. His INT rate was 2.9%. In five years under Reid, Smith’s INT rate was more than chopped in half (1.35%).

Last year’s Bills were a mediocre or worse team, but they made the playoffs on the back of a solid defense and Taylor’s league-best 0.95% interception rate. Of Buffalo’s nine wins, seven came when Taylor did not throw an interception. In 2015-2017, the Bills went 20-11 when Taylor was not picked off. They went 4-11 when Taylor threw one interception, and 0-1 when he threw more than one.

The Chiefs are better than last year’s Bills and more equipped to overcome turnovers. But there was still a massive drop-off when Smith threw picks:

The Chiefs went 38-14 whenever Smith avoided INTs. They won only 48% of games when he threw one interception, and 33% when Smith threw more than one.

Since Reid took over, they’re 8-16 when losing or tying the turnover battle.

Smith’s Era is Over in KC

Smith is now in D.C., and the Chiefs have turned to 2017 No. 10 overall pick Mahomes at quarterback. If we assume Mahomes performs at league average in interception rate (2.54%), he will nearly double Smith’s pick rate over the last five years.

The question becomes, will Mahomes’ aggressiveness downfield lead to more touchdowns and points, and thus, offset the fact he may throw more interceptions? That’s a very difficult question to answer.

In 2017, when Smith and the passing offense were hot, and exceeded 8 YPA, he didn’t throw a single interception in any game. And yet the team went only 3-3. The last 3 games of the season when the Smith threw for 8 YPA or more, the Chiefs went 0-3.

They gave up 91 points in 3 games (30 ppg) to the dismal offenses of the Jets, Raiders and Titans last year.

You can look at the above graphic to see that represented. The Chiefs’ 2017 defense was far worse than 2016. Their defensive efficiency in DVOA, by year, since Reid came to town:

It will be even more important for Mahomes to play well and keep turnovers down, because high YPA isn’t going to get the job done with a defense like that of the Chiefs. They lost multiple defensive starters and contributors from last year’s team, including Derrick Johnson, Bennie Logan, Tamba Hali, Marcus Peters and multiple other cornerbacks.

I’d argue the 2018 defense is even worse on paper than the 2017 defense which finished dead last in EDSR, my custom metric which examines efficiency on early downs.

A big concern for the prospect of Mahomes throwing more interceptions would be Kansas City’s defense spending more time on the field.

The Chiefs’ defense isn’t good enough to deal with more snaps or shorter fields. So it was very beneficial that Smith’s offense generated just five interceptions.

Last year’s Chiefs were the NFL’s best defense against running back passes, at least partly because they spent the most money at linebacker of any team in the league. But they finished 23rd against the pass and seventh worst against explosive pass offenses. Losing SS Eric Berry hurt badly, but Kansas City’s defense ranked only 18th in games lost due to injury. If you look at the radar charts on page two of this chapter, it’s evident the defense struggled all year long despite facing a slightly below-average schedule of opposing offenses.

Interceptions from Mahomes won’t be the only thing new in Kansas City in 2018, should he perform at league average levels. There are other mistakes he may make. There was this story which was relayed from their August 1st camp session:

Mahomes made another error Wednesday, once calling the wrong play in the huddle. As a result, his receivers were running routes he wasn’t expecting and he threw an interception.

It’s going to be imperative for Mahomes and the Chiefs to continue to refine their process and decision making in camp. Better for these blunders to occur in August than in September. And young players are prone to make more errors. They have time to fix these things.

And interceptions in camp is not necessarily a bad thing, as Mahomes attempts to gauge timing and work with new receivers. I am not concerned with the way camp is shaping up for him thus far. But it’s definitely something they need to ensure is corrected by September.

Given given the state of the Chiefs’ defense and the schedule they face, it will be very important for Mahomes to avoid the costly turnover. Even when he plays great and produces better-than-Smith averages in yards per attempt, that doesn’t signal the Chiefs will win games, on account of their defense.

I’m high on Mahomes this season. I think he has the potential to be a great long-term prospect and in addition, to have a great 2018 season. But the key will be interception-avoidance. How will Reid coach up Mahomes to stay aggressive and creative with his huge arm, but not force the ball or make bad decisions, late in a play that he’s trying to extend.

The AFC West is wide open this year. While the Chargers are the most talented team from top to bottom, they have some of the worst coaching in the division. The Chiefs are 8-0 against the Chargers in their last 8 games. Since 2014, Reid is 6-2 vs the Raiders and 5-3 vs the Broncos. Reid knows how to win this division. He knows how to beat these teams. But he’s never tried to do so with a quarterback who might throw interceptions at a league-average level. I’m fascinated to see how this element of the Chiefs offense plays out. I’m extremely excited to see Mahomes sling the ball.

And for his sake and that of Reid’s and the Chiefs offense, I hope they dial up efficient plays with just the right level of explosion that will maximize Mahomes talent while minimizing interceptions. If they do, it will be an exciting year for the team and their fans.

Check out the 2018 Football Preview book now at Amazon or in PDF to see more ways for the Chiefs to improve their efficiency, dive into my outlook for their 2018 season, and to check out the player Evan Silva thinks has the best fantasy outlook in 2018.

“Warren’s preview exemplifies the use of analytics and information in a way that should be interesting to any fan. It is more in depth than many teams in the NFL are using today. Every GM and coach would serve themselves well to read the analysis of their team. They would both learn something and immediately appreciate the benefit of the information. Some still live in a world where they don’t know what they don’t know. This has become a crowded field, but no one presents it better, and breaks down what it means better than Warren.”

“Warren Sharp’s Football Preview is the only book that will have something for everyone. It has illustrations and graphics for the visual person. It covers the analytical part of the game in many ways differently than I have seen. It has trends for people who like to bet the games, as well as philosophical thoughts on things that have happened in the past and how they might affect the future of the game. This book breaks down each team by every category imaginable and describes exactly what they did in every situation. If you coach any level of football, from youth to the NFL, you will assuredly receive valuable information… You won’t want to put it down.”