The Kansas City Chiefs Still Have The NFL’s Best Offense

The Kansas City Chiefs traded away their best wide receiver during the offseason — one that currently leads the NFL in receiving yards with his new team. The key defensive philosophies spreading around the league and causing offensive production to hit modern-era lows this season were mostly introduced to stop the Chiefs over the past few years. Despite all of that, through 10 weeks of the 2022 regular season, the Chiefs have the best offense in the NFL.

Kansas City is first in points per drive (2.78), the percentage of drives that turn into touchdowns (35.1%), the percentage of drives that turn into scores (46.8%), EPA per drive (1.21), and EPA per play (0.19), according to TruMedia. The Chiefs are nearly twice as good as the next-best team in EPA per drive (the Miami Dolphins at 0.64) and the gap between them and the Dolphins in EPA per play (0.08) is the same as the gap between the Dolphins and the No. 12 Jacksonville Jaguars.

Then there are the explosive plays. The Chiefs are currently fourth in explosive pass play rate (17.6%), their highest rate since 2017, as are most of the metrics listed above. Despite all the changes to the roster and the defensive attention, Patrick Mahomes currently leads the league in completions that have gained at least 20 yards.

Without Tyreek Hill, there was always going to be a shift in what the Kansas City offense looked like but the production has already exceeded expectations. The Chiefs might not have the same quick-strike potential (though they are still tied for fifth in touchdown drives of five or fewer plays) but they have found ways to distribute the ball and efficiently move down the field.

The shift in philosophy was brought on by how opposing defenses started playing the Chiefs to stop those deep throws and explosive plays. Defenses across the league were lining up in two-high pre-snap shells but much of that was about pre-snap disguise. Most pass plays still saw the defense rotate down into a single-high coverage. Last season, 40.8% of non-Chiefs dropbacks saw middle of the field open coverages while the Chiefs saw it at a 47.1% rate, the third-highest in the league.

After the Hill trade, the Chiefs stacked the reiving corps with players that could win in the short area and run after the catch. But as the Chiefs prepared for those two-high looks, they’re actually seeing them less often. After peaking at around 47% of dropbacks, the rate of coverages has dropped to 43.6%, which is right around the league average for non-Chiefs teams.

Middle Of Field Open Rates Against Chiefs & Rest of League, 2020-2022
data per TruMedia

That’s left the Chiefs facing single-high more often, especially early in the season. Through Week 10, it’s just under half of Mahomes’s dropbacks and Mahomes continues to shred those coverages. Against middle of the field closed looks, Mahomes is averaging 0.48 EPA per play, which is the best in the league. The next highest quarterback is at 0.37. By setting up an offense that has the ability to attack the looks defenses want to use against them, the Chiefs have gotten opponents into more looks the offense wants to see.

In those single-high looks, Mahomes is also getting more Cover-1 than Cover-3 with defenses unafraid of playing against some of the Chiefs receivers in man.  Only three quarterbacks have seen more man coverage this season than Mahomes and only Tua Tagovailoa (0.35) has higher EPA per play (0.33).

So now what have defenses done after getting shredded in man and single-high? Well, they’ve gone right back to middle of the field open coverages. Take a look at the cumulative season averages for Mahomes seeing two-high coverages. It started to spike around the end of 2020. For the 2021 season, it was well above average. But now look at the 2022 season. Teams were barely playing it early in the season and it’s been nearly a straight line shooting up to get above the league average. 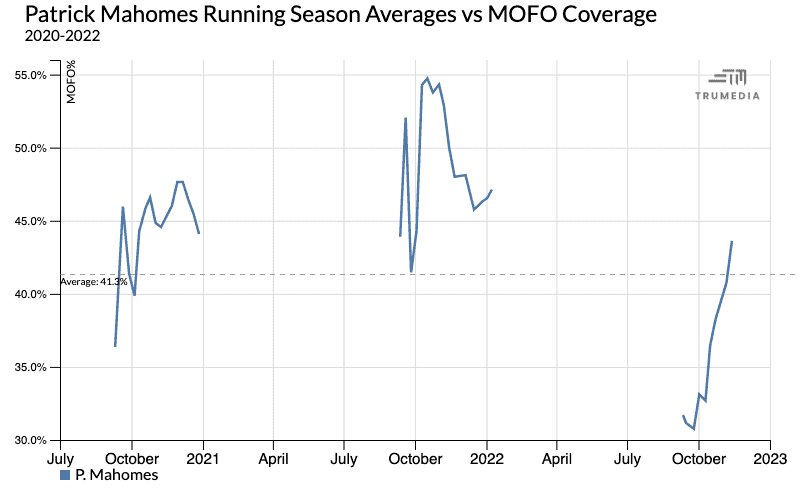 Over the past five weeks, only Derek Carr (55.6%) has seen middle of the field open coverages more often than Mahomes (55%).

The shift in defensive philosophy hasn’t really worked. Mahomes is sixth in EPA per play against middle of the field open coverages. He’s adapted the style that we expected against those types of looks. His average depth of target in that area has dropped all the way down to 5.73 after it was 7.49 in 2021 and 8.01 in 2020.

That aDOT requies a slightly deeper look. Though the overall average depth of target has dropped, Mahomes has increased the rate of passes thrown between 1-10 air yards, where more than 60% of his passes come this season against middle of the field open coverages.

Replacing those throws with passes beyond the line of scrimmage, even short ones, has allowed the Chiefs to keep the ball moving with positive plays. Keeping the ball moving has also enabled Mahomes to better pick his spots when he throws deep against these coverages. Mahomes only has 29 attempts of 11 or more air yards against middle of the field open coverages this season, but he has completed 69% of them and has averaged 0.84 EPA per dropback.

The Chiefs have opened up how they attack some split-safety looks. Against the San Francisco 49ers in Week 7, Kansas City had a 40-yard throw to Marquez Valdes-Scantling down the middle of the field. A corner route from Travis Kelce on the left side of the field occupied that safety, which left space for Valdes-Scantling to get inside the other safety with a post down the middle.

This past week, the Chiefs used the addition of Kadarius Toney as another playmaker to stress the safeties even more and create a one-on-one down the sideline. Out of 12 personnel, the Chiefs motioned Toney across the formation, right to the outside and the same side as Kelce who was in-line. At the snap, Kelce ran to the flat and Mahomes sold a big pump fake (watch the end zone angle for it). That caught the safety peaking in for a step, which kept open the one-on-one window for Toney down the sideline with a 22-yard pass he jumped up and grabbed.

There’s only so much defenses can do to slow down the Kansas City offense. And even when defenses got their way and into looks where they could match up and play man, they got burned and now have to retreat back to how they were playing before. The Chiefs offense will continue to evolve, but nothing has stopped it from being one of the league’s best and most efficient offenses.