We will look back on the 2018 NFL season as one that broke many offensive records. There were a lot of them that can be discussed.

The 2018 season saw the second-most points in history scored as well.

But we didn’t just luck into this happening.

It happened because offenses got more aggressive than ever before and finally opened up their eyes to three of the most seductive words for any fan of offensive production:

Last summer, after the Rams signed Todd Gurley to a $60 million extension with $45 million in guarantees, some thought this was a turning point. After all, in 2017, teams ran the ball on first down in the first half of games 52.8% of the time (avg over the last 20 years was 51.8%).

I argued strongly against that logic. I argued in favor of taking things to the extreme in favor in the opposite direction. Last summer I wrote:

My contention is that teams are actually running the football too often. And they haven’t learned their lesson over the last two decades. Teams are stuck in the past. They feel it’s of-value to establish the run. This is a -EV strategy. Teams should not run on first down in the first half to “establish the run”. We need to change the philosophy of “establish the run” to “establish the lead” and that comes by passing early and allowing teams to run late.

First-and-10 pass plays are more successful, they gain more yardage and will have a higher floor in 2018 than they did in years past… First-and-10 in the first half needs to become more of a passing down.

Despite a high-water mark in first-and-10 run rate in 2017 league-wide, and the bank being broken for the most expensive RB signing in history, thankfully, play callers around the NFL listened.

Last year I created the below graphic that stepped from 1997-2017, studying play calls and production on first-and-10 play calls in the first half. I’ve updated to insert the 2018 season for comparison:

During the 2010 NFL season, the league modified penalties on passing plays to keep quarterbacks and receivers safer. This allowed an easier pass to passing efficiency. Looking at every year since the mid-season rules changes of 2010, it’s evident how the 2018 season stands out:

Offenses became more aggressive with their first-and-10 play calls. They intelligently opted to shift to the pass in a very strong manner.

Aggressive passing on first downs early in the game opened up the run game for many teams as well. As a result, the run game was more productive.

Running from 1-WR sets on 1st down was extremely unproductive, as the defense was very likely playing run. Running from 2-WR sets had more success, but for most teams around the league, running from the 3-WR set of 11 personnel was most productive.

And in 2018, on first downs in the first half, more runs occurred occurred from 11 personnel than in any of the last 3 years:

First down passing is more efficient than first down rushing, but when teams run the ball, they need to do so intelligently. We saw more of that in 2018, which produced much more successful rushing numbers league-wide.

The efficiency brought from more first-and-10 passing in the first half was not a fluke. But the league still must increase its usage. In addition, teams can improve their personnel grouping deployment for even better success.

Much like rushing from pass looks is +EV, passing from run looks is +EV as well. Compare passing efficiency by personnel grouping on first downs in the first half last year:

Offenses need to look to pass more from 12 or 21 personnel on first downs.

Additionally, if we examine the way in which plays are called from these groupings, it’s clear that there is room for improvement:

While these numbers seem logical, I would argue the NFL needs to investigate flipping them on their head. I’d be in favor of 12 and 21 personnel being used as pass groupings on first down.

* KC often used 12 personnel for shot plays on first downs in the first half. Their air yards per attempt of 12.8 was substantially higher than the NFL average, as well as their own passes from 11 personnel (8.0 air YPA) or 21 personnel (6.7 air YPA). As such, their success rate was much lower on these plays.

Which Teams Called the Most Passes on First Half First Downs? 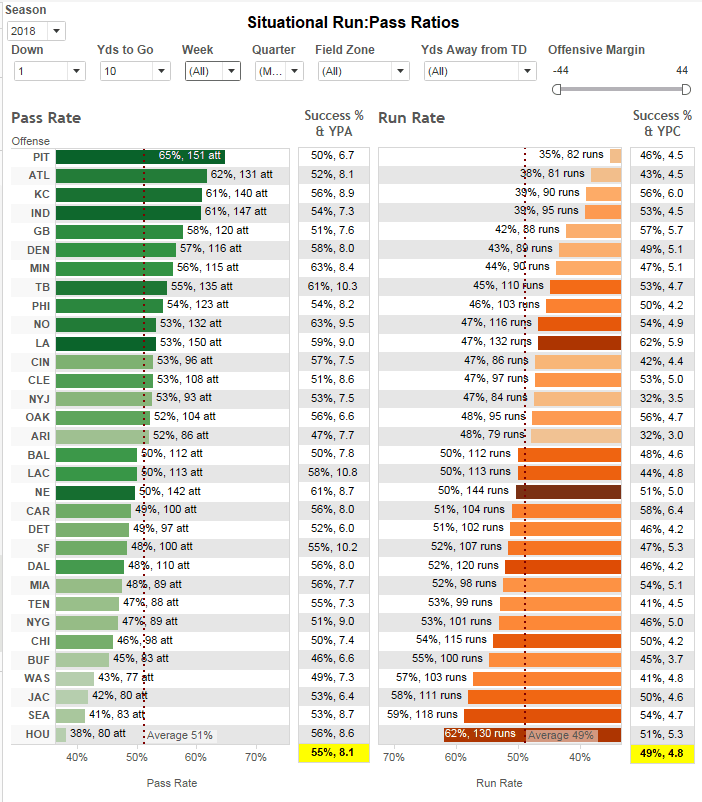 Teams like the Broncos (Case Keenum) and Buccaneers (Jameis Winston or Ryan Fitzpatrick) took to the air on first downs in the first half at well above average rates and had substantially better success when doing so as compared to when they ran the ball. When the Buccaneers passed on first-and-10 in the first half, they averaged 10.3 YPA and a 61% success rate, as compared to first-and-10 runs which averaged just 4.7 YPC and a 53% success rate.

The biggest surprise team was the Seahawks. Despite having tremendous QB Russell Wilson in his prime, the Seahawks chose to run the ball 10% above average, at a 59% clip, the second most in the NFL. While success rates were similar, passes averaged a full 4.0 YPA more than run plays (8.7 YPA vs 4.7 YPC). Expect the Seahawks to continue their run-first ways since it led them to the playoffs last year and OC Brian Schottenheimer and defensive-minded HC Pete Carroll are still calling shots. But their offense would have substantial upside if they let Russell Wilson pass the ball more on first down.

What team was balanced but blew it by not being more pass heavy? The Chargers. Despite me pleading with the team to go much more pass-heavy last summer, the Chargers still passed the ball at a below-average rate (50%). These passes averaged 10.8 YPA and a 58% success rate, whereas runs averaged 4.8 YPA (league average) and a mere 44% success rate (7th worst). If the Chargers went more pass-heavy on first-and-10 in the first half, they would be much more dangerous offensively.

Will Teams Continue to “Pass” on First Down Rushing in 2019?

Yes. It should be a no-brainer, but nothing smart seems to be a no-brainer in the NFL. That said, I believe it will continue. More intelligent offensive minds are being hired or promoted to positions of importance around the league. Better analytics are being made available and coaches are unable to deny the information, and the people with these analytics have more influence on teams and league-wide thought process.

We will see more passing on first down in the first half because it’s more efficient, has more upside and because the rules promote it.

Teams can try to establish the run and make the playoffs, like Chicago, Dallas, Seattle and Houston did last year. These teams went 1-4 in the playoffs, with the lone win when Dallas beat Seattle (solely because Seattle ran the ball so often). These 4 teams didn’t make the playoffs because they established the run. They were good teams that would have made the playoffs regardless of whether they went over-the-top run heavy or not. The ceiling is much higher for the Dallas offense if they pass more on first downs (56% success, 8.0 YPA) rather than run it more (46% success, 4.2 YPC), and the same is true with the other run-heavy teams.

Running as often as some of these teams did is like fighting against the tide: it will work when the tide is low and you’re playing an opponent who is beatable with any style, so it convinces you to continue with this -EV strategy. But when it is high tide, fighting against the rules and modern day efficiencies which favor the passing game when taking on a tough opponent won’t often end well. These teams would be well served to reassess their 2018 tactics.