Always bet on the mystery team. That is especially true when a lurking mystery team has been grabbing all the veteran talent it can get. After a number of teams were rumored as potential landing spots for Odell Beckham Jr, the Los Angeles Rams swooped to sign the receiver for the remainder of the 2021 season.

For the Rams, this is going to be positioned as another “all-in” move by the franchise, but this really isn’t that at all. Trades for the likes of Matthew Stafford and Von Miller cost significant draft capital and wagered that the run of successful late-round picks to complement the highly paid veterans on the roster coil continue as a sustainable form of roster building.

Signing Beckham for the rest of 2021 doesn’t have the same type of investment. Trading for Beckham, or even claiming his contract, could have been looked at as an aggressive move, but bringing in a player on what’s about the same as they were scheduled to pay DeSean Jackson for the rest of the 2021 season is just a good team looking to make an improvement midway through the season.

Of course, the Rams making those all-in moves set them up to be a destination for a player such as Beckham. It’s hard to imagine Beckham makes this move if Stafford isn’t the quarterback. MIller and Beckham are also close friends, evidenced by Miller posting an Instagram story of a FaceTime call with the receiver as the deal was being announced.

The Rams have proved, no matter the cost, they’ll explore avenues that could lead to an improvement on the roster. While the Rams have taken some home run swings before, and Beckham’s name value could lead one to believe this was another, Thursday’s signing was more like getting a head start on a full count with two outs, to continue the cross-sport metaphor.

At this point in the season, the Rams find themselves in an interesting spot. They’re clearly one of the best teams in the NFL (third in DVOA) but they’re not even guaranteed to be the best team in their own division. The Arizona Cardinals are currently first in DVOA and have a game lead on the Rams in the standings. Per Football Outsiders playoff odds, the Rams currently have a higher chance of appearing in the NFC Championship Game (25.2%) than they do to win the NFC West (21.7%).

Adding talent isn’t just pushing all the chips into the middle of the table. The Rams still need to keep up with the teams ahead of them.

On the field, this is a move that makes a lot of sense for both sides. The Rams use 11 personnel more than any team in the league, 85% of offensive snaps through Week 9. They’ve used four wide receivers on the field for just three plays this year (and all with a tight end instead of a running back) but with Beckham in the fold, that could be another element for the offense.

With an already successful passing game, there are also lowered expectations of what Beckham needs to do in order for this pairing to work. Beckham isn’t going to be asked to lead and take over a receiving corps as he might have in New Orleans or New England.

The Rams’ passing game runs through Cooper Kupp, who already has over 1,000 receiving yards on the season. Kupp, though, does most of his damage from the inside, which would leave the outsides open for Robert Woods, Van Jefferson, and Beckham.

Jefferson has mostly played on the left side of the offense and has found success within 20 yards of the line of scrimmage with some work over the middle of the field. Here’s a look at Jefferson’s target heat map for the 2021 season: 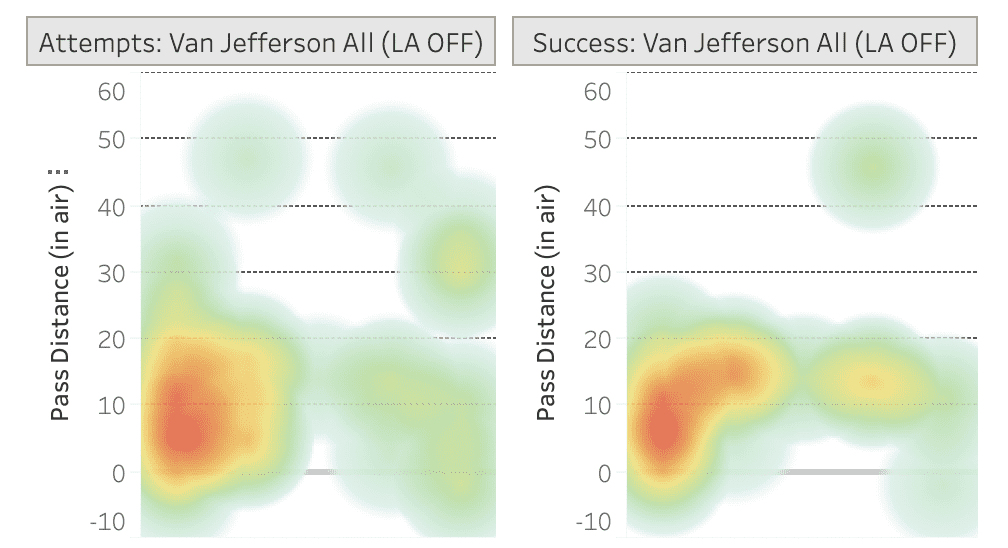 During Beckham’s tenure in Cleveland, he spent most of his time on the outside without many targets over the middle, though that was still an area he was productive when targeted. 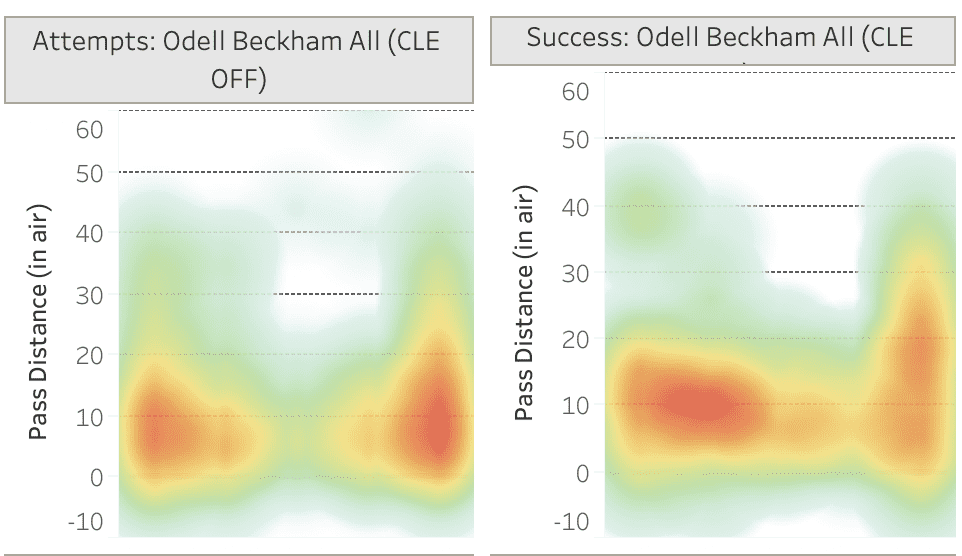 Beckham can still win on those routes down the sideline, one area where the Rams haven’t been able to take complete advantage this season. 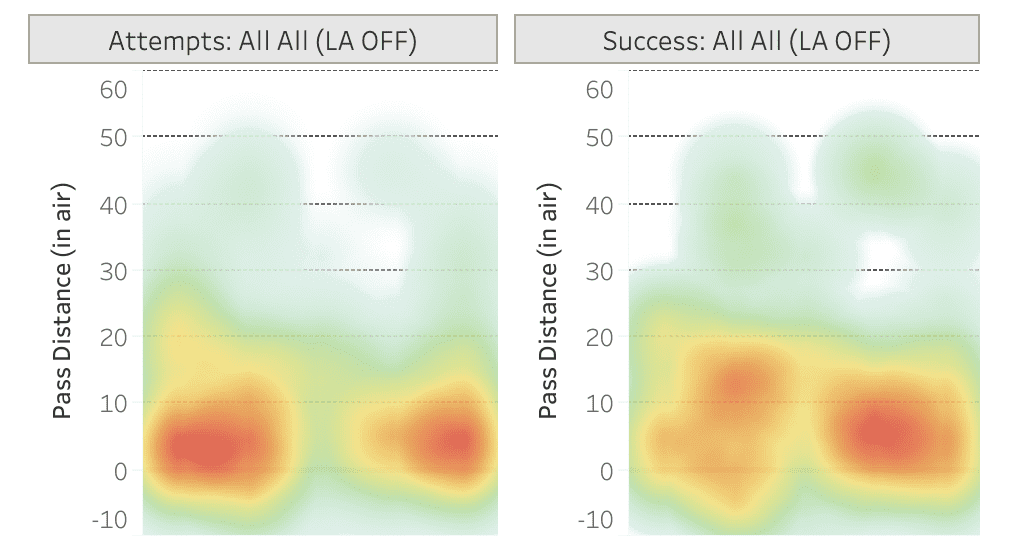 Getting schemed open in the middle of the field could help Beckham get back to running after the catch. Routes to that area of the field were mostly held down by Jarvis Landry and the tight ends. That, and the fallout from his leg injuries, limited the opportunities Beckham had to run with the ball.

According to Next Gen Stats, Beckham would only be expected to have 3.7 yards after the catch per reception this season. The top three receivers in Los Angeles have rates of 4.7 (Woods), 4.7 (Jefferson), and 4.6 (Kupp). Beckham might not be the player to take an 80-yard slant to the house, but the space created in this offense could help Beckham have a little more room to create after the catch.

Stafford is also the best quarterback Beckham will have played with during his NFL career. The quarterback currently leads the league in EPA by a significant margin — 82.5 to 58.2 in second place, according to Sports Info Solutions. With Stafford at quarterback, the Rams have also opened up the offense. While the Browns were able to draw up a few shot plays during a game, those types of plays have become the offense for Los Angeles. If there’s a miss on one, another one is on the way. With Beckham now on the field, there’s another piece the defense has to cover on those plays.

This move could also help both teams in 2022 and beyond. Should Beckham show up and help the Rams make a playoff run, he’ll get to hit the market this offseason for his first true dip into free agency. It would likely be a stretch to see the Rams fit him on a new contract beyond 2021 but if he hits free agency and gets a big enough deal elsewhere, the Rams could be set up for a compensatory pick in 2023.

If Beckham signing with the Rams was a bit of s surprise, the news of Cam Newton returning to the Carolina Panthers earlier in the day came completely unseen off the top rope.

Not long after a report that Newton was meeting with the Panthers, it was reported Carolina had signed their former star to a one-year deal with $4.5 million guaranteed. The money here is significant. For a deal in Week 10, there is more guaranteed money in Newton’s Carolina contract than with the one signed in New England during the offseason ($3.5 million).

(Quick shout out to Bill Belichick, who beat the Panthers so badly in Week 9, it forced them to sign Newton to a deal big enough to erase the offsets from his Patriots contract and will open up about $1.5 million in cap space for the Patriots in 2023.)

That contract signifies the Panthers are serious about Newton for the rest of the season and possibly beyond. It could also be a massive “I’m sorry” gesture from Carolina for releasing Newton before the 2020 season, the first move in the never-ending game of musical chairs the Panthers have played at the position since.

After Newton was released, the Panthers signed Teddy Bridgewater to a three–year contract. Bridgewater was mostly fine, especially when healthy, during 2020 but the Panthers wanted more upside. That led them to trade for Sam Darnold this past offseason, hoping there was unlocked potential for the former No. 3 overall pick. That was a huge gamble from the start and Darnold has been even worse than the most pessimistic expectations and he’s gotten worse throughout the season.

Carolina already had $17 million in dead money on the 2021 cap from Bridgewater’s contract to go along with a $4.6 million cap hit for Darnold. Now add Newton to that number. The biggest unforced error for the Panthers was picking up Darnold’s 2022 fifth-year option at the time of the trade. With the new Collective Bargaining Agreement, that fifth-year option is now fully guaranteed as soon as it’s picked up when it was previously only guaranteed for injury. That now puts the Panthers on the hook for $18.6 million for a quarterback they’re already looking to move on from.

It’s nearly impossible to see Darnold on the roster next season, so the Panthers could release him and take the full $18.6 million hit for 2022 or search for a Brock Osweiler-type trade with a draft pick attached to Darnold in order to send him to a team that could take on that salary. The Jacksonville Jaguars, a team with a ton of cap space, and a need for a veteran backup behind Trevor Lawrence could be an option.

A Newton reunion won’t just be a celebratory gesture. Newton won’t start this week, but there are already rumors he could be put into some packages just to get him on the field as soon as possible.

Newton’s 2020 season with the Patriots was largely viewed as a disappointment but there was some good to take away from it. Early in the season, Newton was able to take over games on the ground. While he shouldn’t be asked to run the ball 15 times a game, that could fit with the Panthers. Early this season, Carolina offensive coordinator Joe Brady had a quarterback run game designed around Darnold that was highly successful, especially near the goal line, before the wheels completely fell off the offense.

As a passer, Newton also wasn’t as poor as the raw numbers would indicate. Even that performance was better than what Darnold has done this season with Carolina:

Newton looked better in the preseason and is now said to be fully healthy. He’ll have a better supporting cast around him with the Panthers than he had with the Patriots last season. Despite his shoulder injury, Newton was able to accurately get the ball down the field, when the Patriots had the ability to go that way. Newton was fourth in completion percentage and third in on-target rate on throws 10 or more yards past the line of scrimmage.

The Panthers have been able to get open down the field, but only 41.1% of Darnold’s passes more than 10 yards past the line of scrimmage have been completed this season, better than only two other quarterbacks among 31 with at least 50 such attempts.

Carolina has desperately made moves at quarterback, hoping for an answer. Bringing in Newton might be the best-case scenario based upon how poorly the other moves have gone. Newton is 32 years old, but he is still younger than the likes of Matthew Stafford, Russell Wilson, Kirk Cousins, and Ryan Tannehill. If all goes well, this doesn’t have to be just a one-year plan at quarterback. Solid veteran quarterback play along with this young defense could suddenly make the Panthers interesting again.

If there is better quarterback play on the horizon, the Panthers aren’t exactly out of it in the NFC this season. At 4-5, they’re a half-game back of the Atlanta Falcons as the seventh seed in the conference. Football Outsiders has the Panthers with just a 2.8% chance to make the playoffs, but that’s with counting this offense as the second-worst in the league (they’re currently 31st in DVOA).

Nothing about how the Panthers have gone about the quarterback position has made much sense under this new coaching staff, but a reunion with Newton is finally one that brings some upside even if it’s as desperate of a move that put the team in this position in the first place.