Why Have NFL Teams Lost Home-Field Advantage In 2019?

In August, Warren Sharp wrote about the gradual degradation of home-field advantage across multiple sports in recent years. Most of those factors were slow-burning societal or off-field considerations, but things like more balanced refereeing, increased parity, and technological advances that reduce the impact of crowd noise were also posited.

Almost any theory we might have about why home-field advantage might disappear is unlikely to swing so heavily over the course of a single season. Is it possible that this is just random variation that happens to have gone a bit overboard?

How Likely is This Season’s Loss of Home Field Advantage?

To take one view of that question, I took 10,000 random samples of 224 games (15 full weeks) from the last four-plus seasons, just to see how often we’d expect to see a sample that has a negative point differential. It turns out, this really is an extreme result. 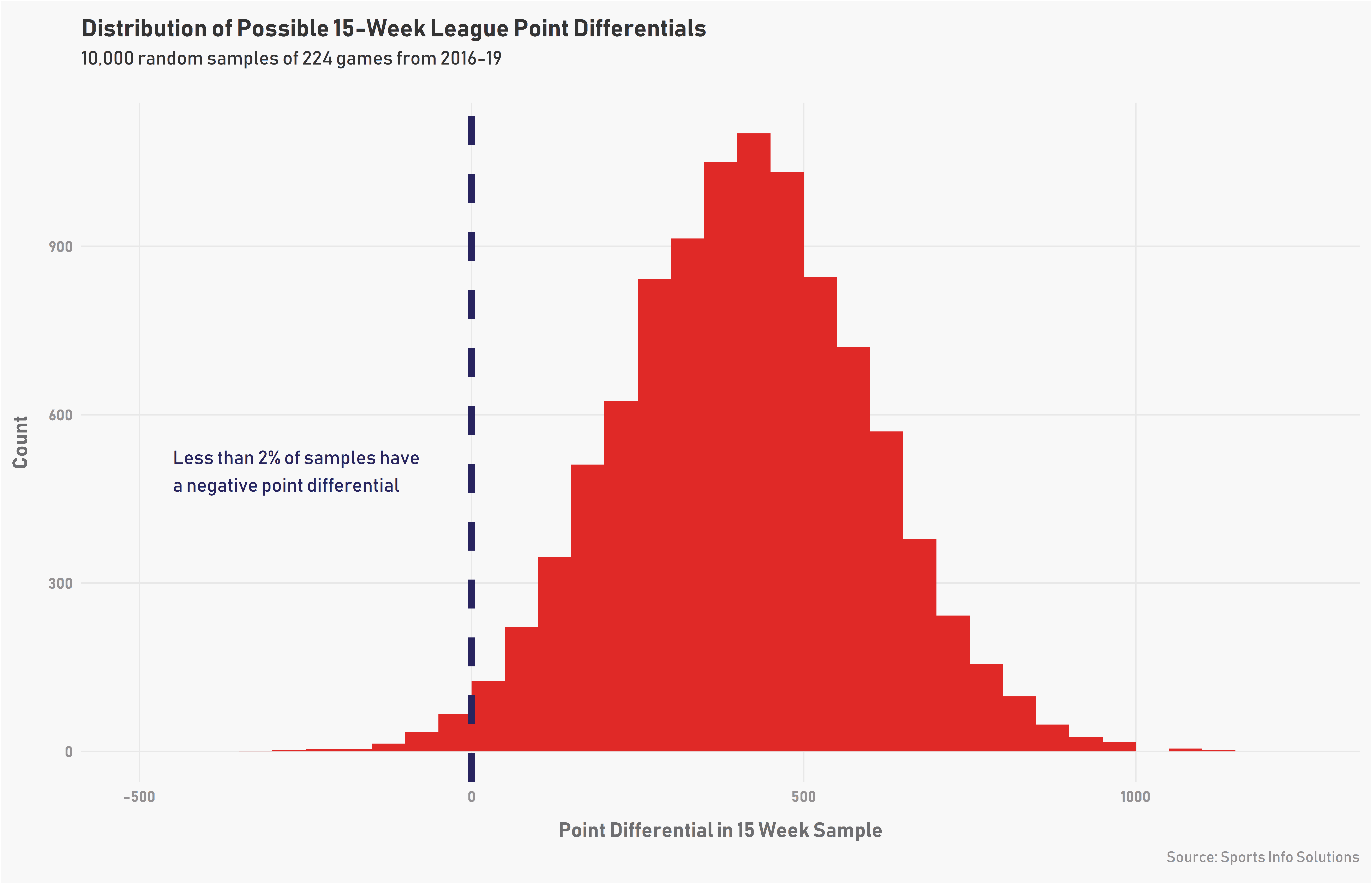 So, this really is a crazy season from a home-field advantage perspective. Can we figure out what’s happening here?

Could it be Officiating?

One option that pops to mind is officiating. Warren mentioned balanced officiating as a possible explanation, and there have been enough discussions about perplexing officiating this year that it might not be unreasonable for that to be driving things.

Oddly, officiating is arguably driving things in the opposite direction. There have actually been more penalties called against road teams than in the past, and that’s with two weeks remaining. If we focus on false starts (penalties that are most likely to be affected by things like crowd noise), there’s been a small uptick, but nothing nearly on the scale we’d need for it to have this kind of impact.

Home vs. Away Called Penalty Differential by Season

Could it be crowd noise?

One of the theories about how crowd noise might drive home field advantage is that it disrupts offensive play at the ends of the field. That theory does bear itself out in the data from previous seasons, but it’s actually been the opposite of what you’d think this season.

Expected Points Added Per Play by Field Location and Home/Road

Only plays within 20 yards of either goal line

Home offenses have done worse within 20 yards of either goal line than road offenses this year, where they were a little better over the previous three seasons. Unfortunately for us narrative-seekers, the difference is coming from both sides — in that home teams are doing worse and road teams are doing better — so a single phenomenon doesn’t appear to be driving it.

One tangible impact of (at least the risk of) crowd noise is impaired performance of offensive tackles on the road. That comes about because silent counts force them to be a beat slower and allow edge rushers to get off the line a beat faster. John Shirley of Sports Info Solutions showed that there is a home-field advantage in both edge rushing and outside run defense, especially on third and fourth down when crowd noise would have the largest effect.

This season, the effect is about the same, although there is an interesting drop-off in performance on outside runs at home relative to previous seasons. In one season, that’s a pretty small sample (remember, this is just on late downs), so even if that shift is “real” it wouldn’t make a dent in the league-wide home-field advantage.

2019 Offensive Tackle Metrics on 3rd and 4th Down

What Have We Learned?

After spending some time trying to investigate this odd shift in the value of home-field, there might be more questions than answers. Statistical methods suggest this is a significant shift, but the above preliminary analyses suggest that none of the phenomena we’d usually associate with home-field advantage are showing any indication of being the cause.

Just like with the Shirley article from last year, there is still room to devise theories for the mechanisms for home-field advantage, and we’re open to ideas on why this might have shifted. For now, though, it looks like it might just be a really bizarre twist of fate, and we’re as likely to see home-field advantage reappear next season as anything.