The NFL Draft has come and gone and hopefully everyone who read my Draft Props article last month was able to prosper. We easily hit on Jaycee Horn under 13.5 (-112) draft position, Kyle Pitts under 5.5 (+104), and the big payout with the Browns first draft pick position of cornerback at +400.

Now that free agency and the draft have essentially been completed and the 2021 NFL schedule has been released, we finally have a clear picture as to what most of these NFL rosters will look like (Green Bay says hold my beer). Back on April 1, I examined how free agency had impacted Super Bowl odds and gave out the Broncos 60-1 as well as 28-1 to win the AFC, +285 to make the playoffs and over their win total of 7.5 at +100. With that in mind, I captured the Super Bowl odds via Betonline.ag the day before the draft began and the current odds below: As mentioned above, Denver was a tremendous value weeks ago at 60-1 or higher to win the Super Bowl. I talked about how this was already a top 10 roster outside of the quarterback and set to face potentially the easiest schedule in the NFL (they have the second-easiest by Vegas win totals) after facing a top 10 most difficult schedule last season.

Everything was falling onto their laps before last week’s Adam Schefter report that Aaron Rodgers was disgruntled and could lead to a trade. Denver has since emerged as the top trade candidate for his services and that has forced books to drop the Broncos’ Super Bowl odds from 60-1 to 20-1 at most places. I still think even without a Rodgers trade that Teddy Bridgewater gives the Broncos a steady hand at QB and a good chance of winning 8+ games and making the playoffs.

Among the other teams who saw their post draft odds drop significantly, the Falcons and Giants saw their odds drop the most after the draft. You could potentially make the case that the Giants could make a Rodgers offer as well but I suspect the drop in odds came from some sharp action after a solid draft in a weak division. Adding defensive help with pass rusher Azeez Ojulari in Round 2 to go with free agent signing in Adoree Jackson should give the Giants solid reinforcements to a defense that overachieved last season with a 19th-ranked defense by DVOA.

Free agent WR addition, Kenny Golladay, should also help potentially give Daniel Jones the weapons he needs to break out. It still remains to be seen if Jones is a real NFL starter, but bettors are taking a chance on that happening in his third year.

The Falcons move is a warranted one based on the fact that they decided to not draft a rookie quarterback with the fourth overall pick and instead go all-in for this season with Matt Ryan and Kyle Pitts.

It is still a question as to what happens with Julio Jones, who could be traded after June 1 due to his cap hit, but this offense should be explosive no matter what. Add in the fact that they go from facing the toughest schedule in the NFL last season, to one that is closer to league average this year, and according to their point differential, should have won 3.5 more games that they did (most in the NFL) and I agree with the move in the odds.

The Falcons will face the NFC East and AFC East, along with Detroit and Jacksonville, to add to most likely facing a much weaker Saints team in-division and with a little luck and some of Arthur Smith’s play-action magic and the Falcons are clearly a strong Super Bowl sleeper.

In terms of teams that saw their Super Bowl odds increase, the Packers have gone from 12-1 to 16-1 with the Rodgers rumors. Otherwise, the Jets and Panthers saw their odds increase the most after the draft. I am not sure what is driving both the Jets and Panthers odds to increase so substantially, as both were originally mentioned as potential Deshaun Watson suitors months ago. The news of Watson’s legal troubles essentially ending any potential trades with those teams has been known in the market for over a month now. 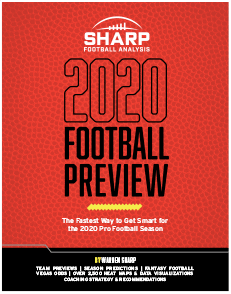