Despite scoring double-digit fantasy points in six consecutive games, Tyler Boyd’s salary ($4,800) has dropped to its lowest point since Week 11. That makes him a great value this week, in a matchup where he appears to have an advantage against the Tennessee Titans.

As the Bengals’ slot receiver, Boyd sees a significant portion of his targets in the short passing game and in the middle of the field. 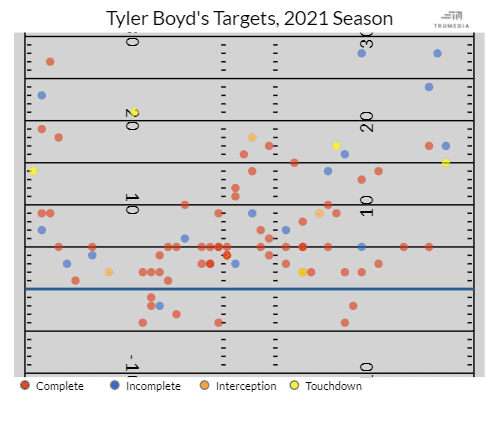 Boyd’s usage matches up well with the area of the field the Tennessee Titans’ defense has consistently struggled to defend, allowing a 55% success rate in that region. 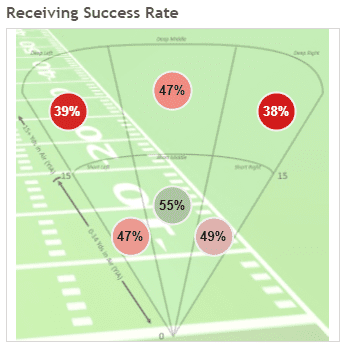 Cincinnati’s tendency to throw from an empty set could also boost Boyd’s usage in this matchup.

In games where Boyd, Tee Higgins, and Ja’Marr Chase were all active, Joe Burrow attempted 22% of his throws from empty sets, according to Sports Info Solutions. On those throws, Boyd was second on the team behind Chase with a 25% target share.

Although the Bengals’ empty set rate is already among the highest in the league, they could increase their usage in this matchup. Tennessee ranks 24th in yards per attempt allowed versus empty sets (7.8) and 26th in EPA per play.

Boyd has value on his salary even if the Bengals continue with their standard game plan, but an increased use of empty sets could lead to a larger role for Boyd, allowing for a big game.

On the season, the Packers ranked 26th in success rate allowed to tight ends, so we should expect Kittle to have a significant role in the game plan this week. 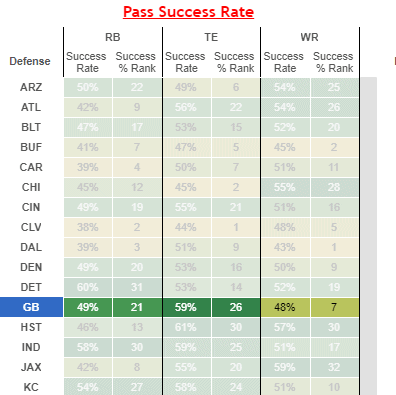 According to TruMedia, Green Bay also allowed an 88.2% completion rate to tight ends in the red zone, ranked dead last, with 39% of those targets resulting in touchdowns.

Kittle’s fantasy output has been in the single digits in four straight games, which has dropped his salary to its second lowest number of the year. There is some risk San Francisco leans heavily on the run game, diminishing his role again, but the low salary makes the risk easy to justify in this favorable matchup.

This matchup between the Kansas City Chiefs and Buffalo Bills carries the highest total of the weekend (54.5 points) by nearly a touchdown, making Josh Allen ($7,600) an obvious target for DFS lineups.

The Kansas City Chiefs’ pass defense has struggled all season, ranking 23rd in success rate allowed, so expect Allen to post strong numbers through the air. 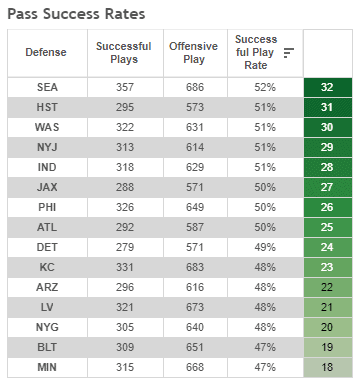 Allen should also provide value on the ground, as mobile quarterbacks have taken advantage of the Chiefs’ defense all season.

According to TruMedia, the Chiefs rank dead last in EPA allowed to quarterbacks in the run game.

Excluding kneel-downs, quarterbacks have averaged 5.8 yards per attempt against the Chiefs, and Allen contributed to that rate with eight carries for 62 yards in the first meeting between these teams.

With expected fantasy value on both phases of the offense, Allen has an elite ceiling in this matchup and should be given strong consideration for DFS lineups despite carrying the highest salary at his position.