Boyd’s salary is reduced due to his mildly disappointing fantasy numbers this year (10.6 points per game). With just one touchdown, he’s been unable to match his production of recent years.

We should expect increased offensive output from the Bengals this week, however, with a matchup against the New York Jets’ friendly defense.

Our personnel grouping frequency charts show Cincinnati lines up in 11 personnel on 79% of pass plays, while the Jets are one of just nine times allowing a 50% success rate or higher versus 11 personnel:

With the Jets ranked 29th in scoring defense and having particularly struggled to defend 11 personnel, we should assume Boyd’s odds of reaching the end zone and exceeding expectations are boosted this week, making him a good tournament gamble on this low salary.

If you want to save cap space on the quarterback position, Jared Goff ($5,200) looks like a good value against a struggling Philadelphia Eagles secondary.

Goff has maintained a strong pass volume this season 一 at least 35 attempts in six of seven games 一 so he’s a candidate for a breakout game in the right matchup.

With the game within a touchdown, Philadelphia is allowing a 62% success rate against the pass, the worst in the league.

The Eagles’ 2.9% sack rate in that scenario is also the league’s third-lowest rate, so we should expect Goff to have to throw in this matchup.

19 healthy quarterbacks carry higher salaries than Goff, making him a potentially elite value. And since most DFS gamers spend up on the quarterback position, he’s also likely to have a low rostership, further boosting his tournament value.

Buffalo Bills tight end Tommy Sweeney ($2,900) might be worth a dart throw in tournaments with Dawson Knox expected to miss a few weeks following surgery to his hand.

Sweeney has just 12 career receptions in his three seasons with the Bills, but he played a consistent role in the Boston College passing game in college, with over 1,200 career yards and 10 touchdowns.

The Miami Dolphins defense has been vulnerable against tight ends, giving up 9.8 yards per target when in a one-score game, the league’s fourth-worst rate. 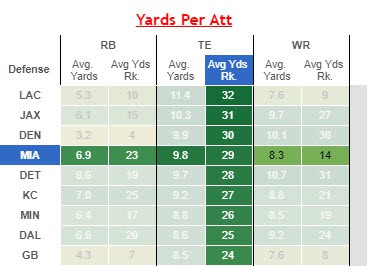 Additionally, tight ends have seen a 21% target share against Miami, so this appears to be a weakness in the Dolphins’ defense opponents are purposefully attempting to take advantage of this season.

There’s a zero floor for Sweeney, so be cautious in deploying him, but there’s certainly high upside if he fully steps into Knox’s role in this matchup.

If you’re playing on a slate that includes the full Sunday schedule, the Sunday night showdown between the Dallas Cowboys and Minnesota Vikings is an obvious stack candidate.

The Dallas defense has been especially vulnerable to explosive plays as well, ranking 25th in explosive pass rate allowed.

Adam Thielen ($7,000) leads Minnesota in explosive play rate, though Justin Jefferson ($8,200) isn’t far behind. Stacking one of those receivers with Kirk Cousins ($6,500) could be a winning strategy.

With Dallas favored by 3.5 points, adding Ezekiel Elliott ($7,300) could potentially create a strong stack based on an expected Cowboys victory. But with both teams demonstrating explosive potential on offense almost any combination of the key playmakers is justifiable.