This matchup between the Los Angeles Chargers and Philadelphia Eagles is the only game on the main slate with a total over 50 points. It looks like it could be a low-scoring weekend in the NFL, making this an obvious candidate for game stacks.

On the Chargers side, Austin Ekeler ($7,900) looks like an ideal running back to roster based on his role in the offense. Dating back to Week 2, Ekeler has seen at least five targets in every game.

The Eagles have struggled to defend running backs in the passing game this year, and opponents have taken notice. Running backs account for 25% of all targets against Philly and generate a 67% success rate, the second-worst rate in the NFL. 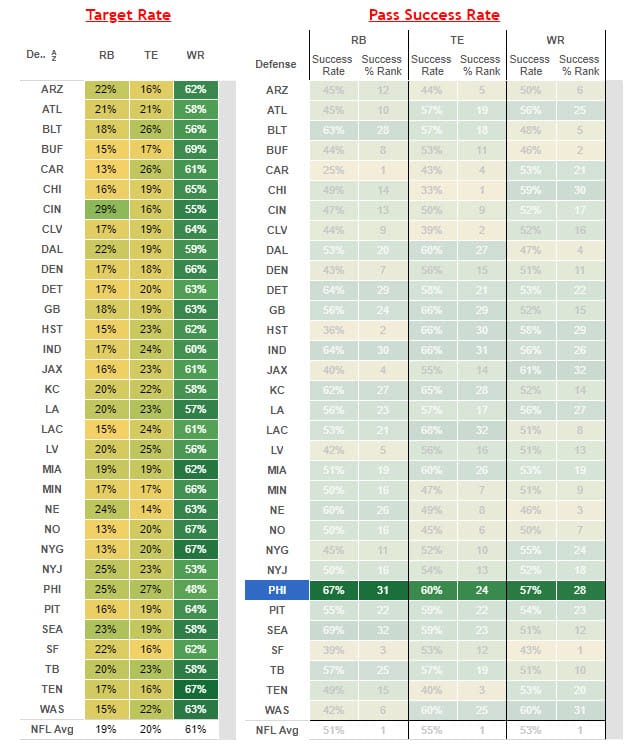 On the Eagles side, DeVonta Smith ($5,200) and Dallas Goedert ($4,500) can be easily added to the stack on relatively affordable salaries.

In two weeks since the Zach Ertz trade, Smith and Goedert have combined for a 48% target share.

Pairing Ekeler with Goedert and Smith should give us access to a significant portion of the offense in this game. Adding either Justin Herbert ($7,000) or Jalen Hurts ($6,700) at quarterback is a consideration as well, though Hurts may be a slightly better option with the Eagles as a two-point underdog.

It’s difficult to trust the Miami Dolphins’ offense right now, but DeVante Parker ($5,300) should still be on our radar based on this matchup with the Houston Texans.

Our explosive pass rate chart shows Houston is allowing at least 20 yards on 17% of targets to wide receivers, excluding plays in the red zone. 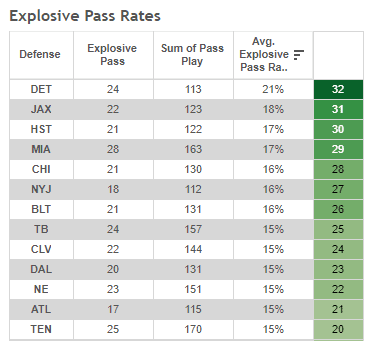 Miami isn’t an explosive offense this season, but Parker has been their most reliable explosive weapon. In games without Will Fuller (still on the IR), Parker has produced an explosive play rate of 11%, far ahead of Jaylen Waddle’s 4% rate.

Since Parker is used downfield, while Waddle is limited to underneath routes, Parker’s production will be less volume-dependent and he could provide value with just a few big plays downfield.

Mark Ingram ($4,600) should be treated as a tournament dart throw only, but this looks like an ideal opportunity for him to see increased touches against the Atlanta Falcons.

The New Orleans Saints are six-point favorites, and when playing with a lead they run the ball at the third-highest rate in the league (60%). 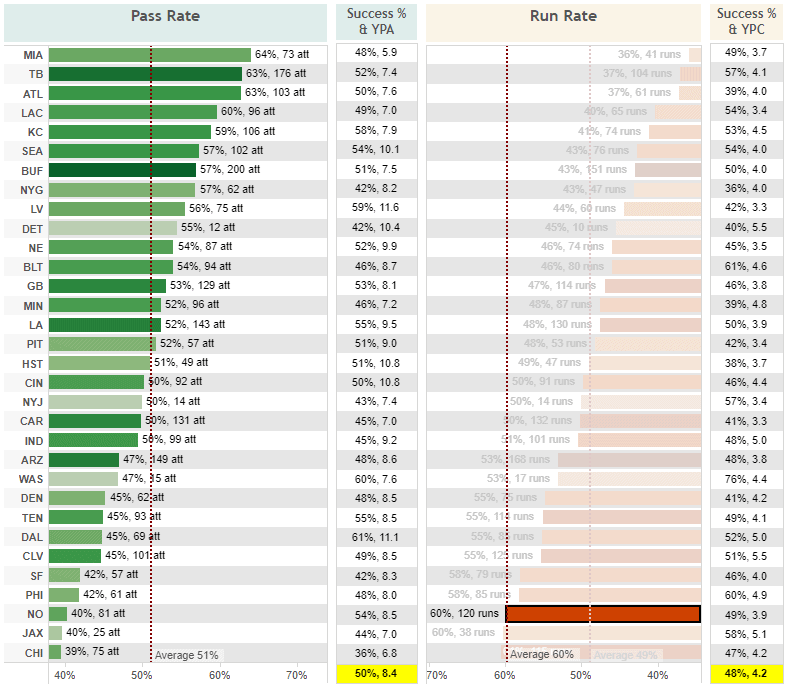 New Orleans primarily runs the ball in 11 personnel, which is a bad matchup for the Falcons defense. 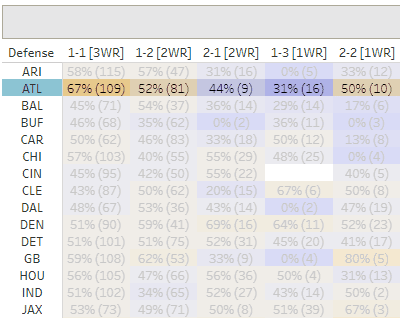 Obviously, Alvin Kamara ($8,200) will see the bulk of the carries and is also worth rostering this week, but Ingram will likely have low rostership and increased usage, potentially making him a valuable addition to lineups.