With the 2020 NFL schedule release the next upcoming event for the league, we are going to take a look back at how the schedules played out and impacted the fantasy landscape a year ago.

Strength of schedule based on a team’s win-loss record from the previous season has had next to no correlation in rolling over to the next season. But from a fantasy stance, we can take a look back at the previous season to see if how the schedule played out impacted last season at all for players in hopes to find further clarity for those players who exceeded expectations on the season and for those who let us down.

For the record, when it comes to defensive matchup analysis, I do believe a large portion of team defensive statistics are essentially statistics from the opposing offensive performance firsthand. Even with that thumbtacked in a front corner of my mind, I also do believe there are good defenses in the NFL and that they can impact games.

But when it comes down to how I incorporate defensive matchups into analysis and weekly decisions, I am more apt to shade towards a statistically poor defense elevating a mid-to-lower offense or player in a matchup versus a great defense erasing a great offense.

As an example of the latter, Lamar Jackson had seven games this past season in which he failed to match his season scoring average established prior to that game. Four of those games came against San Francisco, Buffalo, Pittsburgh, and Kansas City, all top-ranked teams in limited quarterback scoring a year ago. Over those seven games, Jackson still averaged 21.9 fantasy points per game and was the average QB9 in final scoring those weeks. Sure, he had a dip in his output in those games, but was still a strong asset.

On the other end of that equation, someone like Daniel Jones had just three games in which he bested his prior season average in starts and those games came against Detroit, Washington, and the Jets.

My methodology is basic when looking at the results for the individual passers. I am simply taking the average fantasy points allowed by opposing defenses to quarterbacks prior to the game in which they faced that passer and then measuring it against that weekly performance. For the individual passers, we are only looking at their starts.  So a player like Daniel Jones does not get docked for entering Week 1 and playing a final possession that is five snaps on his year to date totals as he would strictly from a games-played perspective.

Without a baseline for points scored in Week 1 outside of the prior season statistics, those games both went into the player and team points averages allowed, but we are focusing on the subsequent games played Weeks 2-17 once we started applying 2019 output to the sample. Taking a look at all quarterbacks that started six or more games a year ago, let’s roll into some notes. 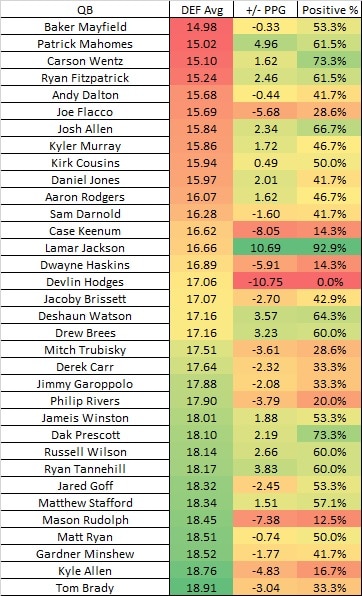 *DEF Avg. = Average Fantasy Points allowed per game prior to facing the QB
*+/- PPG = On average how the QB scored per week vs. that prior DEF Avg.
*Positive % = Percentage of starts in which the QB outscored the prior DEF Avg.

Since this is a strength of schedule outlook, I sorted the table above by the average fantasy points allowed by a quarterback’s opponent prior to that game.

As mentioned, I am a believer that a lot of defensive metrics are offensively influenced, so wrapping things up we want to take a look at how defensive schedules played out and how those defenses performed versus their slate of opponents. Taking things to a team defense level, here is how 2019 shook out on that front.

*OFF Avg. = Average team QB Fantasy Points scored per game prior to facing the DEF
*+/- PPG = On average how the QB scored per week vs. that prior OFF Avg.
*Negative % = Percentage of starts in which the QB failed to reach their season average prior to that point