With the 2020 NFL schedule release scheduled for this Thursday night, we are taking a look back at how the schedules played out and impacted the fantasy landscape a year ago.

Yesterday we covered the strength of schedules and performances versus opponent for both quarterbacks and pass defenses. With the methodology laid out in the opening post, we are going to move on to the running back position and how defenses performed versus opposing backfields based on the points per game they were scoring and allowing entering that given week.

As a reminder, when it comes to defensive matchup analysis, I do believe a large portion of team defensive statistics are essentially statistics from the opposing offensive performance firsthand. Even with that thumbtacked in a front corner of my mind, I also do believe that there are good defenses in the NFL and that they can impact games. But when it comes down to how I incorporate defensive matchups into analysis and weekly decisions, I am more apt to shade towards a statistically poor defense elevating a mid-to-lower offense or player in a matchup versus a great defense erasing a great offense.

Without a baseline for points scored in Week 1 outside of the prior season statistics, those games both went into the player and team points averages allowed, but we are focusing on the subsequent games played Weeks 2-17 once we started applying 2019 output to the sample.

*DEF Avg. = Average PPR Fantasy Points allowed per game prior entering that matchup
*+/- PPG = On average how the Team Backfield scored per week vs. that prior DEF Avg.
*Positive % = Percentage of games in which the backfield outscored the prior DEF Avg.

Of course, we have to flip the tables since a lot of defensive metrics are offensively influenced. With that in mind, we want to take a look at how defensive schedules played out and how those defenses performed versus their slate of opponents. Taking things to a team defense level, here is how 2019 shook out on that front. 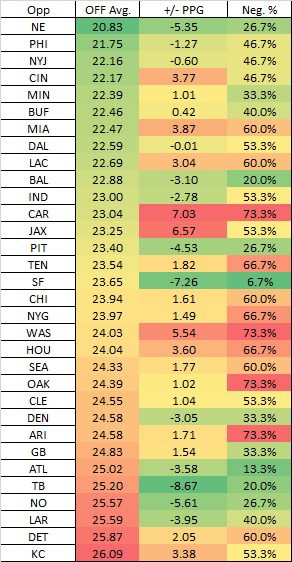 *OFF Avg. = Average team RB PPR Fantasy Points scored per game prior to facing the DEF
*+/- PPG = On average how the RBs scored per week vs. that prior OFF Avg.
*Negative % = Percentage of games in which the RBs failed to reach their season average prior to that point