The season will open with the defending champion Los Angeles Rams taking on the Buffalo Bills on Thursday, September 8.

Below is a schedule grid that features each team’s week-by-week schedule. 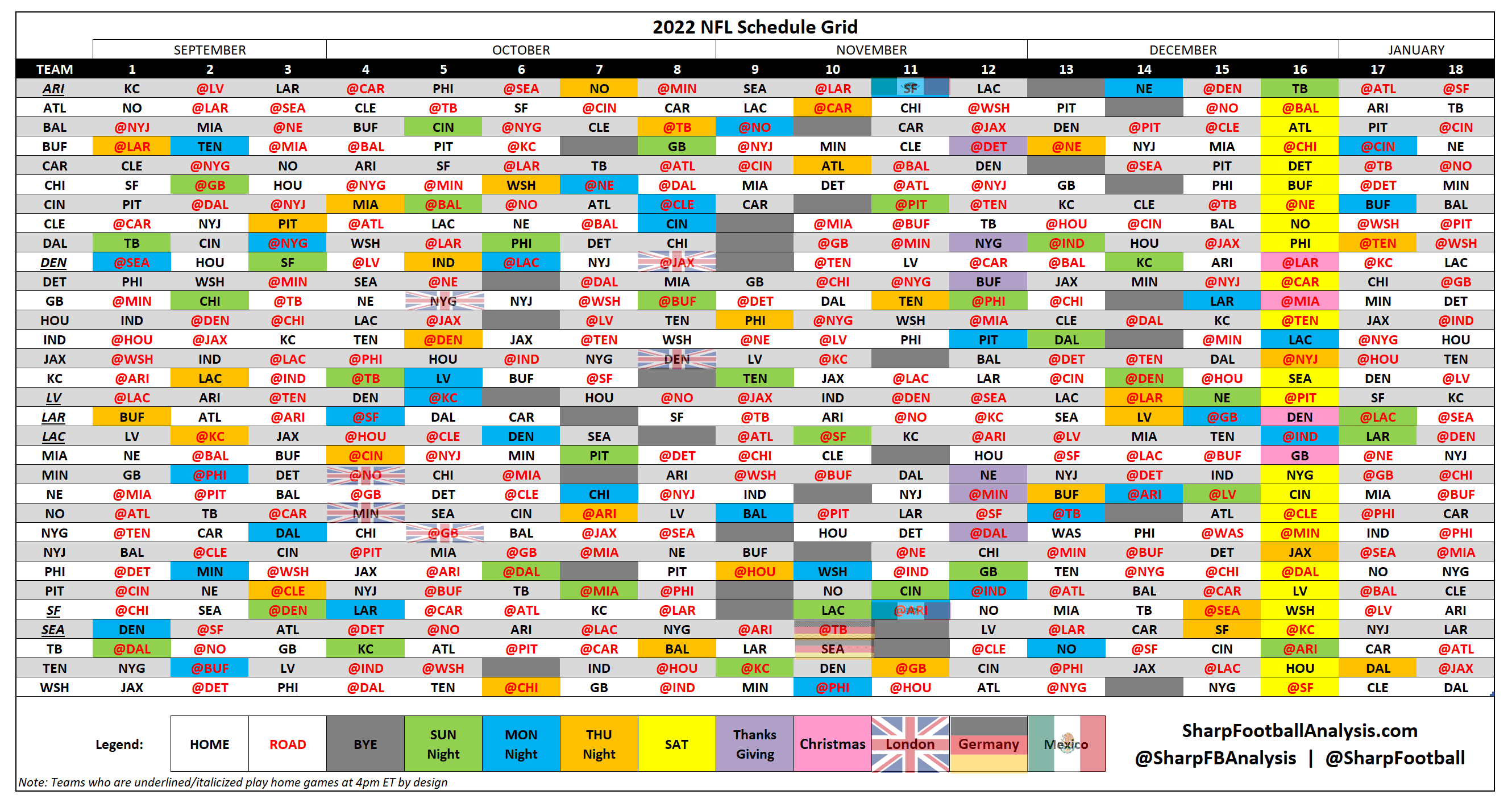 While there aren’t perfect NFL strength of schedule metrics, using 2022 Vegas win totals is much better than so many widely used metrics that use the previous season’s record.

The Vegas win totals give us a better indication of what teams could look like in 2022 than their 2022 wins would.

Using that metric, we can see the New York Giants have the easiest projected schedule while the Kansas City Chiefs have the hardest.

What NFL team has the easiest schedule for 2022:

Based on projected win totals, the New York Giants have the easiest strength of schedule for the 2022 NFL season.

The next easiest schedules, in order, are the Philadelphia Eagles, Indianapolis Colts, and Chicago Bears.

What NFL team has the hardest schedule for 2022:

Based on projected win totals, the Kansas City Chiefs have the hardest strength of schedule for the 2022 NFL season.

Since 2018… teams with 3 straight road games are 22-11 in those matchups pic.twitter.com/Vq7OtIxIPG

well well well, NFL, what do we have here

the NFL gave the Browns…

with the suspension of Deshaun Watson incoming…

Games against an opponent coming off a BYE

First two games on the road 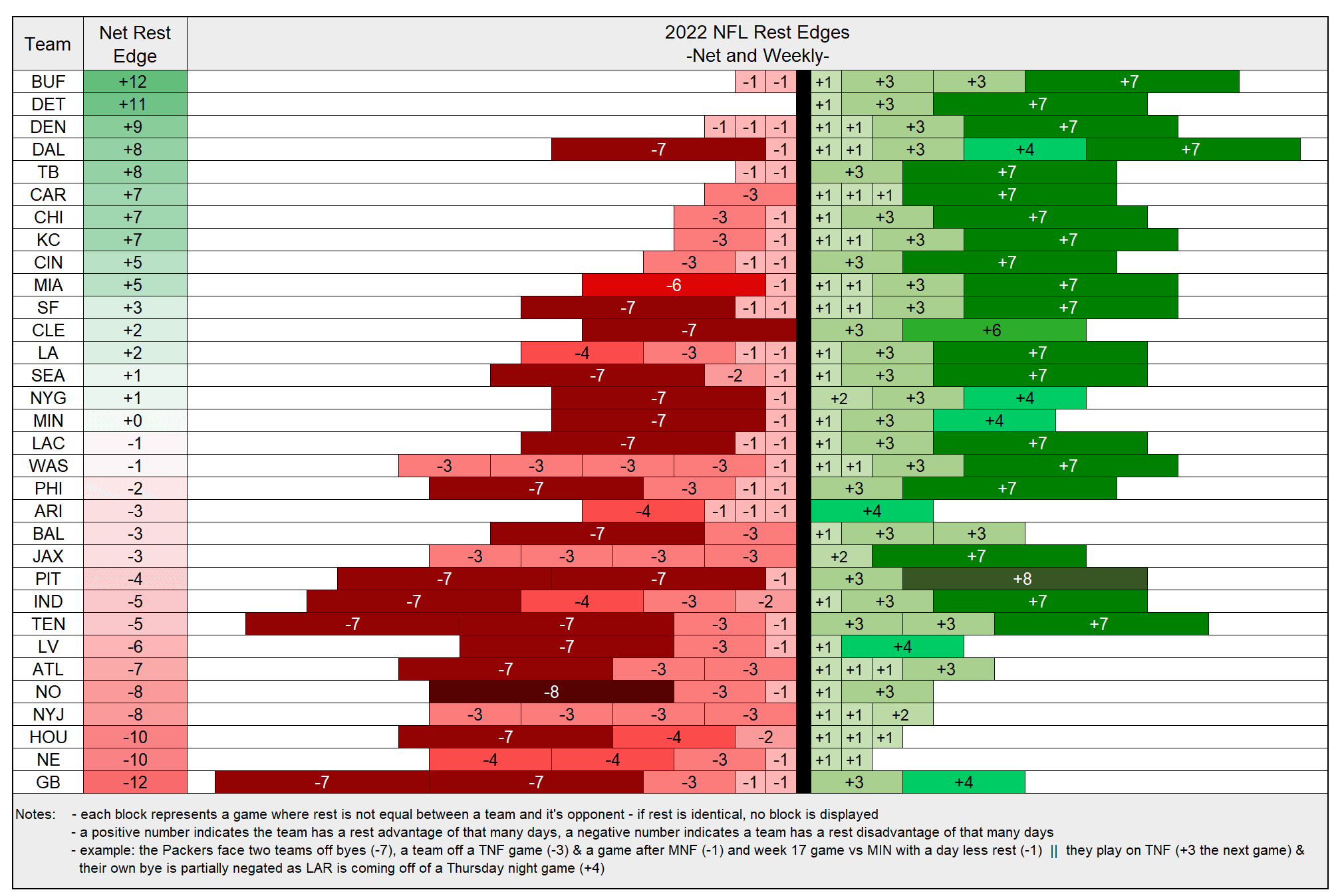 In 2021 we saw 85 out of 272 games played where one team had a rest advantage over their opponent. Instead of reducing that number to introduce more equality in rest, the NFL increased the number of games with rest disparities in 2022.

This year, there are 93 games played where one team has a rest advantage over their opponent.  That’s 34% of the total schedule.  And while a one day rest disadvantage may not seem like much, particularly early on in the season, now with a 17-game schedule, every day matters especially later in the season.

Thus, the worse teams, playing with a rest disadvantage, won just 27.5% of games instead of 29.2% of games.  While these numbers may seem slight, as you know, every year making or missing the playoffs is decided for multiple teams by one single game.  And coaches are fired or save their jobs at times based on the result of one single game.

So efforting to increase parity and equality and limiting the number of games with rest disadvantages should be paramount.  But the NFL increased the number of these games this season.

and how the ranking in 2022 compares to 2021 as well as the prior decade pic.twitter.com/S2mbpAA9hn

we have two ways to evaluate the season:

and the ways to measure #2?

prep & rest rankings: ranking all the situations I shared in this thread – pic 2 pic.twitter.com/9ayOV0z46n

Their Week 17 game in Tennessee this year is a short week road game, but the NFL was still kind to the Cowboys, by having them play on the Saturday preceding this Week 17 contest, thus reducing the lack of rest days to four (Sunday through Wednesday) instead of the standard three (Monday thru Wednesday for teams that play Sunday and then a road Thursday game).

the Cowboys also play 5 games this year with more rest than their opponent, most of any team in the NFL

This season, teams play an average of 2.6 games vs opponents who have less than a week to prepare for the game.  That is up from 2.1 games per team in 2021, which means we’re trending in the wrong direction.

Last year, only one team played four games vs opponents who had less than a week to prepare for the game.

This year, several teams play four games vs opponents who have less than a week to prepare for the game.

But the Cowboys are extremely fortunate.

This year the Cowboys play six games vs opponents who have less than a week to prepare for Dallas.

Not all of these games present rest edges (only three of them do) but it is an extreme anomaly for a team to play six games vs opponents on short rest when the NFL average is 2.6 and no team in the last few years played more than four such games.

Last year, no team had to play more than two short week road games in a season.

Half of the Eagles’ eight road contests force them onto the road on short rest. Meanwhile, 21 teams play either zero or one short week road game. 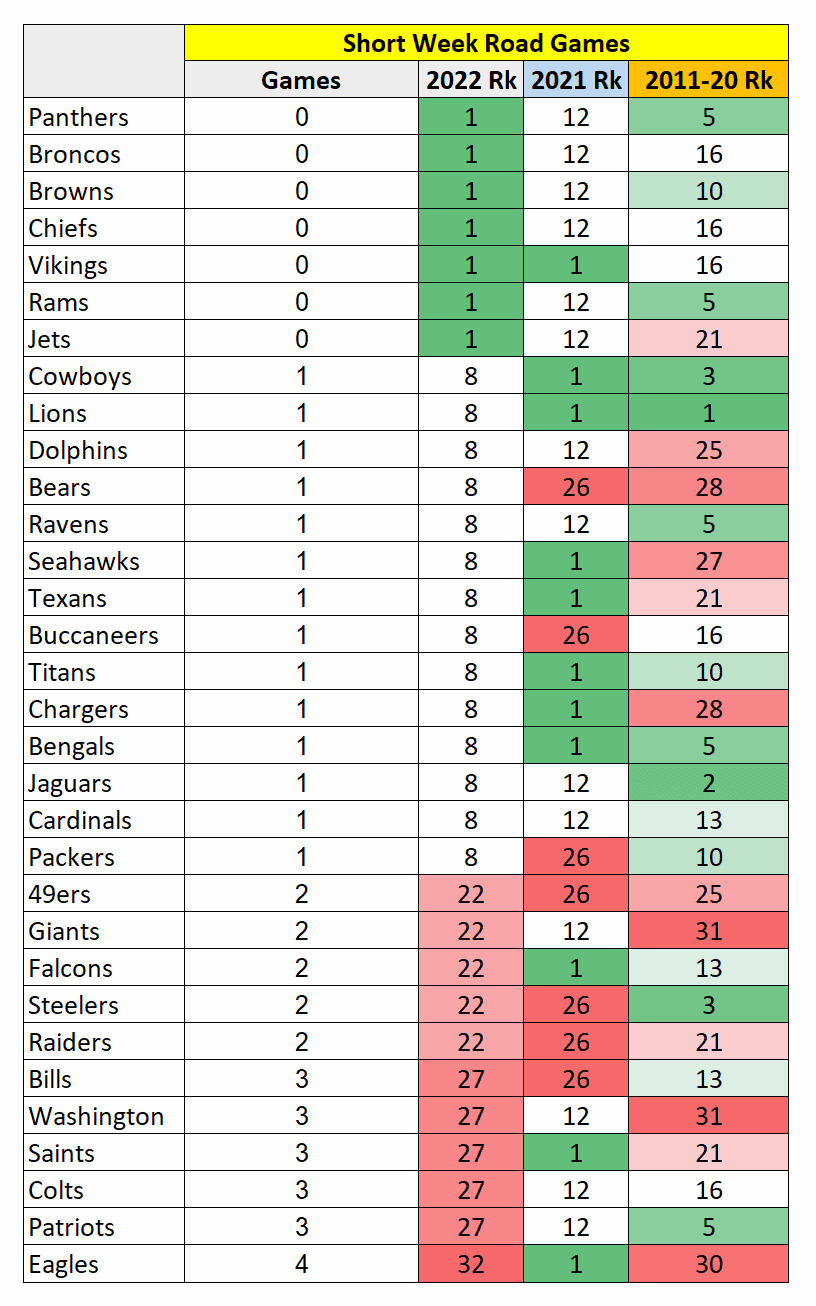 Washington is one of three teams to play four different opponents who are coming off a “mini-bye” (while not a full bye week, this happens when a team plays on Thursday and has three extra days of rest before next playing two Sundays from their prior game).

Last year, no team played four opponents off of mini-byes. This year, it’s happening to three teams: the Commanders, Jets, and Jaguars. But it’s particularly brutal for Washington as the games are all bunched tightly at the end of a long, 17-game season.

Washington is at a 3-day rest disadvantage in every game and their opponents, late in the season, have the benefit of critical extra rest.

Not only is that brutally difficult, considering that only three of 32 teams face four opponents off of mini-byes, it’s hardly fair.  And is an increase over 2021 considering not one team was asked to perform such a gauntlet.