Watch Out For The Tight End Deep Cross

Even as the NFL has seen some of the most athletic tight ends in history enter the league over the past few seasons, the receiving output at the position hasn’t grown at the same rate. In fact, the target share for tight ends dropped from 2017 to 2018. The overall passing game has grown, but the usage of tight ends hasn’t really exploded with it.

But while the raw production might not look drastically different, the way in which tight ends have been used has certainly changed. Tight ends are getting more snaps and targets from the slot and outside than in years past and teams are changing up the ways to get tight ends open down the field.

That brings us to a route that has grown in frequency and could take over in 2019: the deep cross.

Most teams have taken advantage of this route with Y-Cross, an old Air Raid staple. It’s long been a part of Mike Leach’s playbook, Chip Kelly consistently used the play, and it wouldn’t be a surprise to see it pop up in Arizona this season with Kliff Kingsbury.

Y-Cross was one of the first shot plays in the Air Raid system that used a go route from the X receiver to clear the sideline (or be open) with the tight end crosser coming from the opposite side of the field. 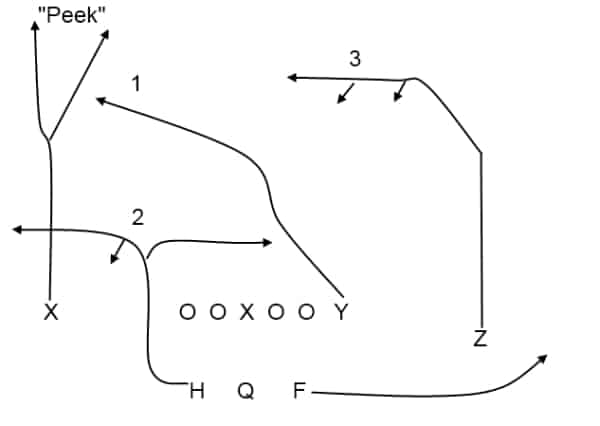 Over time, the above diagram has changed. The H became another slot receiver and more often than not, the tight end moved out to the slot. However, what makes this play — and the tight end crosser in general —  productive at the NFL level is the ability to still run this from a traditional tight end alignment.

Last year the route was significantly more efficient when the tight end was targeted from in-line rather than the slot.

What also makes the route interesting at the NFL level is how much more effective it was from 12 personnel (two tight ends) than it was from 11 personnel in 2018.

No team targeted this route more than the Baltimore Ravens (14 attempts) and they were one of the most effective on it — 0.75 EPA per attempt and 64.3 percent positive play rate. Five of those attempts came from 12 personnel, where the Ravens really excelled (1.54 EPA per attempt), thanks mostly to this 68-yard touchdown from Lamar Jackson to Mark Andrews in Week 16.

The Philadelphia Eagles were also pretty effective from 12 personnel (0.9 EPA per attempt) and could use that even more as Zach Ertz and Dallas Goedert get more time on the field together.

Of course, there were teams like the Kansas City Chiefs, who still excelled with the route from 11 personnel (0.93 EPA per attempt on six throws).

What makes this route so interesting for 2019 is how likely the good teams will stay that way and the ones at the bottom of efficiency and usage can improve.

Only one team did not target a tight end on a deep crossing route last season and that was the Detroit Lions. Detroit just selected T.J. Hockenson, who averaged 27.3 yards per reception on three catchable deep crosser targets last season at Iowa. Hockenson is much more likely to be a consistent deep passing threat than the likes of Luke Willson and Levine Toilolo, who were Detroit’s tight ends last season.

The deep cross to the tight end isn’t going to suddenly take over as the go-to play for NFL teams, but it already has a long history both in college and the pros as a successful shot play — something NFL teams are getting better at scheming open. It’s already closing in on the seam route and could be how this new wave of tight ends provide the most value as downfield threats.